YANGON/BANGKOK -- Southeast Asia has, in recent decades, enjoyed increasing democratization along with economic growth. But there has been significant backsliding of late on free speech rights in the region.

Two reporters working for the Reuters news agency have been arrested in Myanmar while covering the Rohingya refugee crisis. In Cambodia, one radio network's bureau and a newspaper have been shut down. Authorities in Singapore and Thailand are also tightening the screws on media.

These moves may keep a lid on dissent in the short term, but they risk storing up trouble for later by aggravating social divisions in these countries.

"What's going on reminds me of the days of the military rule," said one dismayed journalist in Myanmar with 20 years of experience in reference to the arrest of the Reuters reporters. Wa Lone and Kyaw Soe Oo were invited to dinner on Dec. 12 by a source inside the police. The pair had planned to interview their source, but instead they sent a text message with the words: "I have been arrested." They have been held incommunicado for two weeks.

About 24 hours after their detention, the Ministry of Information announced on Facebook that the reporters had been arrested "in possession of important security documents obtained from the police." Photos of the reporters in handcuffs were posted along with the announcement. 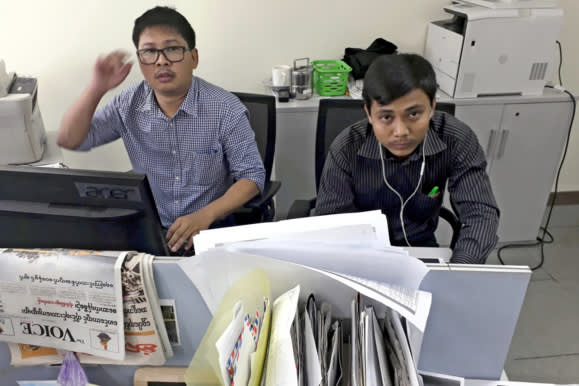 Reuters reporters Wa Lone, left, and Kyaw Soe Oo were arrested in Myanmar while working on a story about the Rohingya refugee crisis.   © Reuters

As Myanmar democratized and moved toward civilian rule half a decade ago, the government eased restrictions on the media. In 2012, it began allowing private publishers to produce daily newspapers and let foreign news organizations open bureaus in the country.

But under the government formed in 2016 and effectively led by Aung San Suu Kyi, a string of politicians have sued journalists and media outlets for libel on internet. After these moves drew criticism, the law was revised in August. But the arrest of the Reuters reporters highlights the authorities' suspicion toward independent media and their obsession with secrecy. The reporters allegedly had a map of the security posts attacked on Aug. 25 by the Arakan Rohingya Salvation Army, a Rohingya militant group, as well as internal documents which requested additional weapons. The two are likely to be accused of violating Myanmar's official secrets act, which was introduced in 1923, when the country was under British colonial rule, according to police sources.

Win Htein, an influential politician in Suu Kyi's ruling National League for Democracy, told local media the arrest of the Reuters reporters may have been planned in advance, implying that they may have been framed.

The Myanmar government has tightened controls on foreign media since November, as the Rohingya problem grew more acute, and the country has come in for international criticism. In response, authorities are scrutinizing foreign journalists more closely. The government has officially designated the Rohingya militants as terrorists, warning readers of state-run newspapers that expressions of support for terrorist organizations are banned. Journalists work in the newsroom of The Cambodia Daily newspaper, which was later forced to close, in Phnom Penh on Sept. 3.   © Reuters

Crackdown in Cambodia, squeeze in Singapore

Myanmar is not the only country in Southeast Asia pressuring the media. In Cambodia, the Cambodia Daily, a local English-language newspaper, closed up shop in September after 24 years in operation. U.S.-affiliated Radio Free Asia was also forced to close its Phnom Penh bureau. Cambodian Prime Minister Hun Sen's government made demands of both, including payment of huge "taxes."

The government is increasingly intolerant of anyone who opposes it. The leader of the main opposition party was arrested on treason charges. In a statement released Sept. 12, Libby Liu, president of Radio Free Asia, said: "It has become increasingly apparent that Prime Minister Hun Sen has no intention of allowing free media to continue operating inside the country ahead of the 2018 elections."

Singapore, a symbol of Southeast Asia's growing prosperity, fits this grim authoritarian pattern. A closely watched trial is expected to open early in 2018. Li Shengwu, a nephew of Prime Minister Lee Hsien Loong, has been charged with contempt of court -- critics say for his criticism of the government. Li Shengwu, nephew of Singapore's Prime Minister Lee Hsien Loong, who faces contempt charges in his homeland, is pictured here at Harvard University in the U.S. state of Massachusetts on Aug. 12.   © Reuters

Li's complaint on Facebook in July that the Singapore authorities are overly litigious and that the courts are pliant in the face of government pressure is being treated as contempt by prosecutors.

A month earlier a brotherly feud broke into the open between the prime minister and Lee Hsien Yang, Li Shengwu's father, regarding the final wishes of their late father, Lee Kuan Yew, Singapore's founding prime minister.

Contempt of court charges targeting prominent lawyers, bloggers and activists are not rare in Singapore. The accusations against Li Shengwu, who has opposed the prime minister, highlighted the city-state's limits on freedom of speech.

Thailand is another place where one can get in trouble for using social media to criticize the government -- in this case a military junta.

Online censorship has been stepped up, with people sent to jail for posting articles about the military or the monarchy, or for merely sharing them. According to iLaw, a civic group that monitors the legislative process in Thailand, more than 60 people in 26 separate cases have been charged with sedition for activism, social media posts or simple criticism.

Recently, a former deputy spokeswoman for the Pheu Thai Party, which backs exiled former Prime Minister Thaksin Shinawatra, was charged with sedition over Facebook posts that attacked the government. One of the posts criticized former Gen. Prayuth Chan-ocha, the country's prime minister, for refusing to meet with protesters opposed to a planned coal plant, but taking time out for a photo-op with a rock star. Other posts accused him of secretly negotiating arms deals with the U.S. 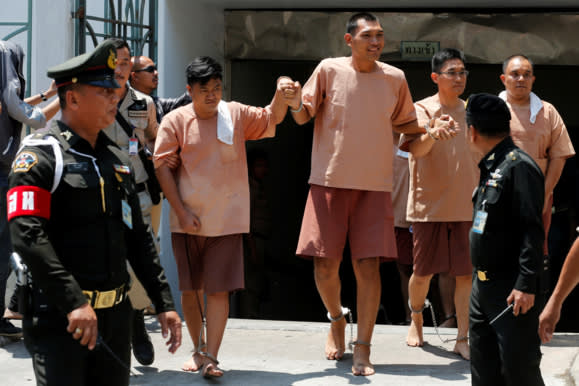 Activists, who were detained after posting comments critical of the ruling military junta on Facebook, leave a military court in Bangkok on May 10, 2016.   © Reuters

Earlier this year, the Thai authorities asked Facebook to "respect the sacred laws of Thailand," and to remove several thousand posts the junta deemed illegal, such as alleged violations of the country's lese-majeste law. It even threatened to halt sales operations of Facebook in Thailand. Facebook reportedly requested legal information on each case. By August, Facebook had deleted half the posts at issue. The dispute abruptly came to an end after the government declared it was "satisfied with the cooperation" from Facebook.

The junta has also used the country's draconian law against criticizing the monarchy -- violations of which carry a jail term of up to 15 years -- to silence critics. Traditionally, lese-majeste refers to insults against the monarchy. But many of those now detained under its provisions are pro-democracy activists and outspoken critics of the military regime.

Since the May 2014 coup, at least 117 people have been arrested on charges of lese-majeste, according to the International Federation for Human Rights, a France-based pressure group. Fifty-two suspects have been sentenced to prison terms of up to 35 years. To date, at least 60 people are either in detention awaiting trial or serving prison sentences for lese-majeste. Before the military takeover there were only six such prisoners. Reporters Without Borders, wary of Beijing, opens in Taipei

Political corruption is still rampant in Southeast Asia, encouraging many regional governments to clamp down on freedom of expression to keep those who complain in line. This, in turn, stunts countries' political development.

Critics say that with the U.S. showing less interest in defending human rights and in Asia generally, authoritarian governments are having an easier time. When U.S. President Donald Trump met with Prayuth at the White House in October, the issue of free speech did not come up. Under Trump's predecessor, Barack Obama, Thai military government was taken to task.

Authoritarian rule, sometimes called "developmental dictatorship," has long been a feature of Southeast Asian politics. But with growing middle-class populations hungry for freedom and democracy, the old methods of maintaining order may not work. Leaders may find that harsh crackdowns on freedom of expression come at the cost of the steady economic growth on which their long-term survival depends.

Nikkei staff writers Takashi Nakano in Singapore and Jun Suzuki in Jakarta contributed to this report.