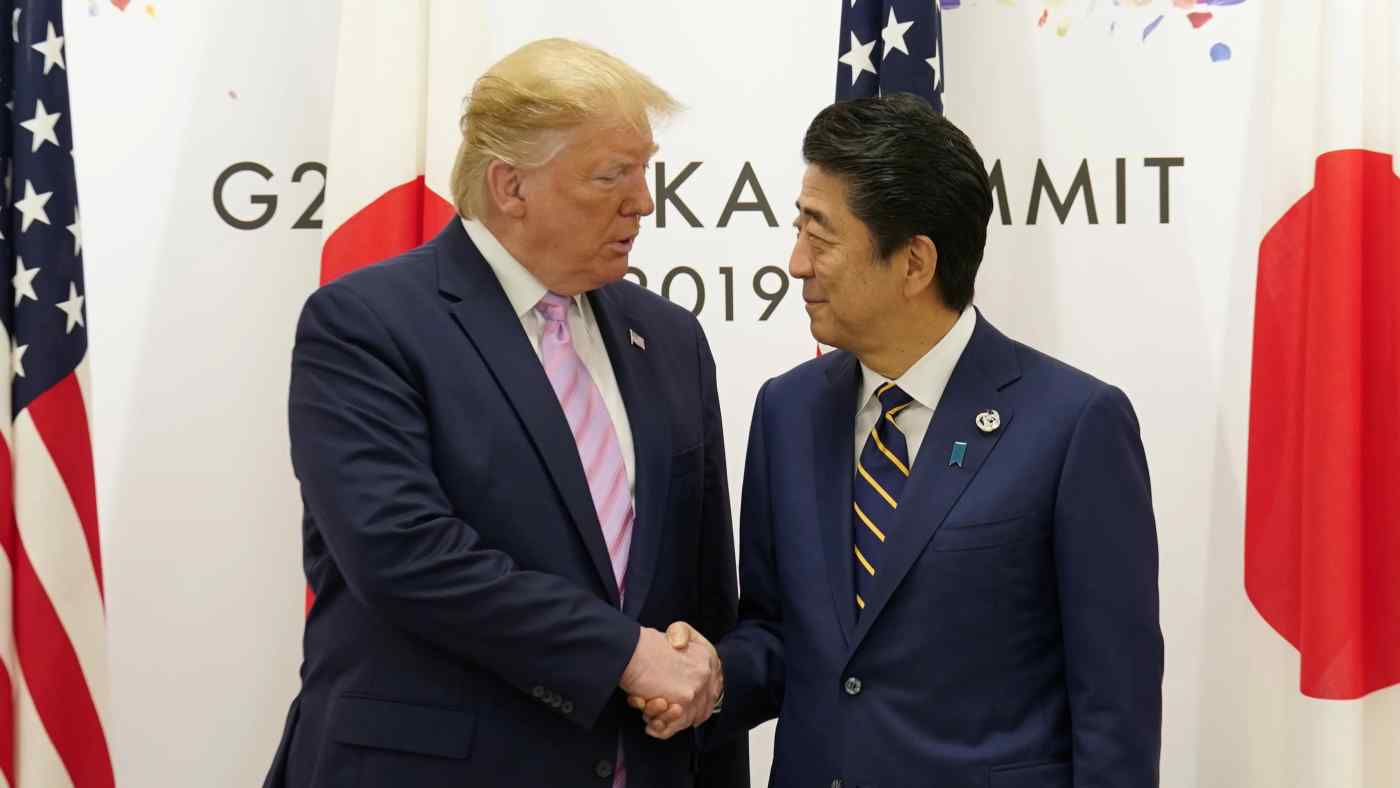 OSAKA -- U.S. President Donald Trump and Japanese Prime Minister Shinzo Abe on Friday met before the opening of the Group of 20 summit in Osaka, where Abe and Trump reconfirmed that the nations' long-standing cooperation on security arrangements remain in place and that bilateral trade talks will be accelerated.

This is the third time for Trump and Abe to meet in less than three months, an unusually frequent pace.

As the summit began, Abe stressed that having so many meetings with Trump in a short period of time is "evidence of an unfaltering alliance." He thanked Trump for visiting Japan in May as the first state guest in Japan's new Reiwa era, calling it a "historic event." He mentioned sustaining global growth is a challenge that can be conquered "through cooperation" by the G-20 nations.

According to a Japanese official who spoke after the meeting, Trump and Abe discussed security issues and took up various challenges that Japan and the U.S. face in the region. But Trump did not bring up revisions to the Japan-U.S. Security Treaty, the base of the nations' alliance, the official said.

Before Friday morning's meeting with Abe, Trump had been pressuring Japan by questioning the legitimacy of the decades-old security alliance.

"If Japan is attacked, we will fight World War III," Trump told Fox News on Wednesday. "But if we're attacked, Japan doesn't have to help us at all. They can watch it on a Sony television, the attack."

Trump began the week by calling on Japan and China to protect their own tankers traveling through the Strait of Hormuz, an important waterway between Iran and the Arabian Peninsula through which much of the world's oil supply traverses. Previous U.S. presidents had staunchly supported a U.S. military role to keep the strait open, if need be.

The Japanese official also mentioned that Trump and Abe spoke of the rising tensions in the Middle East, including in regard to Iran. The Trump administration has pulled out of the so-called Iran Nuclear Deal, reimposed economic sanctions on Iran and has been blaming the Gulf nation for a series of apparent sabotage missions on ships near the strait. The official chose not to speak in detail but said Japan hopes for a diplomatic solution to the U.S.-Iran rift.

The latest summit comes at a sensitive time as Trump piles more pressure on America's trading partners. That pressure began the day after Trump took office. In January 2017, his administration pulled the U.S. out of the Trans Pacific Partnership, a free trade deal cobbled together by 12 nations while former President Barack Obama was in the White House. Trump is now demanding a bilateral trade deal with Japan.

The U.S. and Japan have agreed to press forward with the trade talks with a goal of reaching a significant outcome after Japan's upper house election due to take place in July.

Trump and Abe also discussed North Korea, with the recent visit there by Chinese President Xi Jinping in mind. The Japanese official said Trump and Abe confirmed their stances on North Korea are perfectly the same and that they will coordinate going forward.