Trump says US will not impose new tariffs on China exports

In apparent policy reversal, president says US companies can sell to Huawei 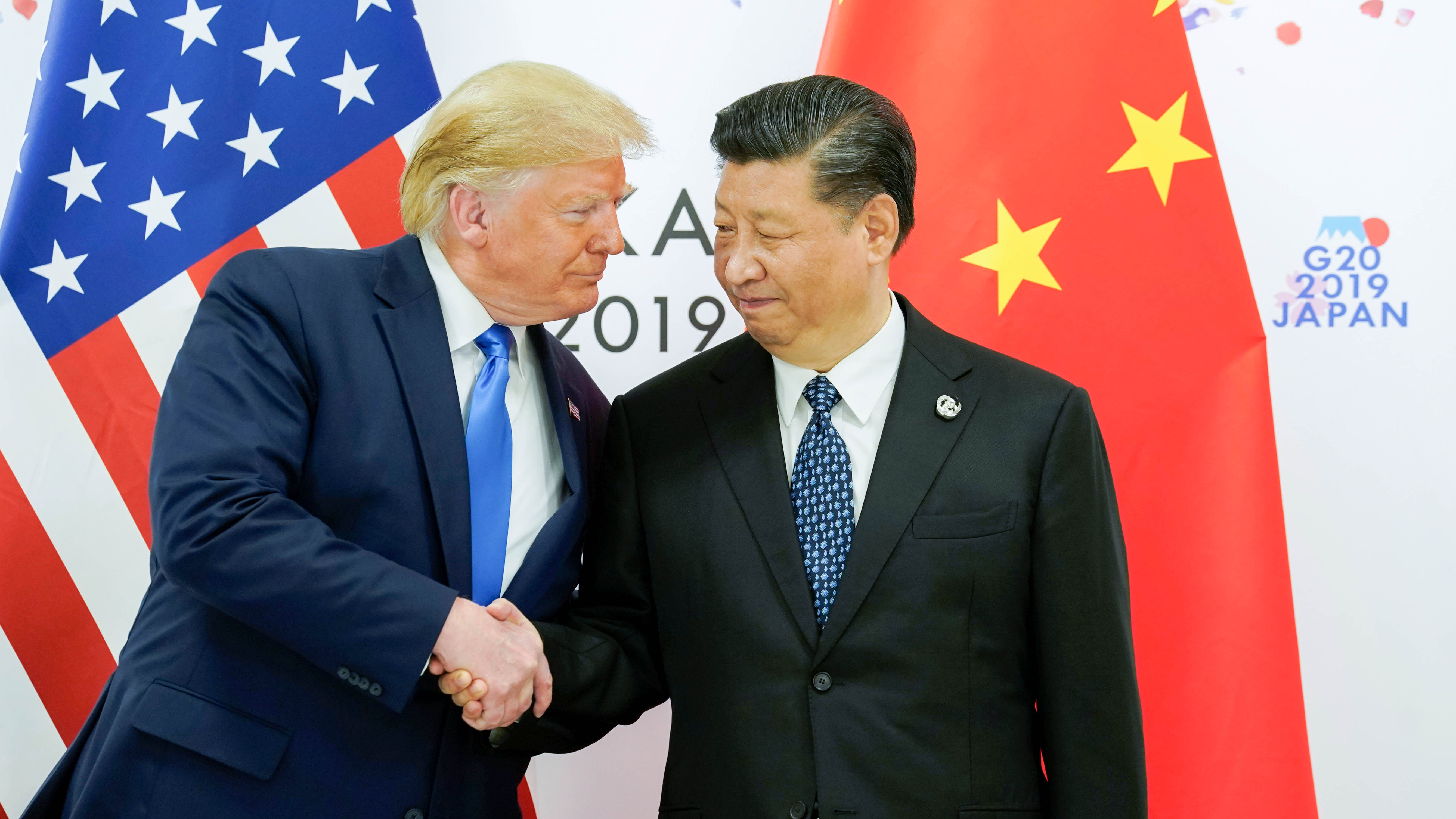 OSAKA -- The U.S. will not levy new tariffs on Chinese exports, President Donald Trump said after bilateral talks with Chinese leader Xi Jinping on the sidelines of the Group of 20 summit in Osaka.

"For the time being we won't be lifting tariffs on China," Trump told reporters on Saturday, indicating that he does not plan to raise levies. "We will work with China. They are going to negotiate and start spending money."

Chinese state media also reported that a ceasefire in the trade war had been settled. The world's two biggest economies have agreed to restart trade talks, Xinhua News said, adding that the two sides will discuss "specific" issues.

Trump also appeared to do a U-turn on his policy toward Huawei Technologies. In May, his administration banned the sale of high-tech components and software to Chinese companies, including the tech giant, by including them on what Washington calls its "entity list."

But on Saturday he said U.S. companies could continue to sell to Huawei.

"We have a lot of companies in Silicon Valley, we are letting them sell to Huawei," Trump said, adding that he would leave the issue "toward the end" of trade talks.

The two leaders met for the first time in nearly seven months on Saturday, again on the sidelines of a global meeting, in an attempt to turn the heat down on a boiling trade war.

Trump is angry at the trade imbalance between the two countries, and has imposed rounds of tariffs on goods the U.S. imports from China. China retaliated by raising tariffs.

As the bilateral meeting began, Xi said he is prepared to exchange his thoughts and that he hopes to set the direction of China-U.S. relations "based on coordination, cooperation and stability."

He added, "cooperation and dialogue are better than friction and confrontation."

Trump responded by saying, "It would be historic if we can do a fair trade deal."

The summit was closely watched around the world as Trump's tariffs and sanctions and China's retaliations are expected to disrupt supply chains and tamp down the global economy.

Washington and Beijing have not returned to the negotiating table since a ministerial session on May 10.

The Trump administration had expressed its readiness to impose new tariffs on $300 billion worth of goods if the summit fails. U.S. President Donald Trump speaks at a news conference on the final day of the G-20 leaders summit in Osaka on Saturday.   © Reuters

Leading up to the summit, the U.S.-China trade war expanded beyond tariffs, with the Trump administration banning the sale of high-tech components and software to Chinese companies placed on what Washington calls its "entity list." Huawei Technologies, a major provider of equipment that will power 5G next-generation mobile networks, headlines the list.

The U.S. Department of Justice has brought charges against Huawei for allegedly stealing confidential information from corporations in the U.S. This has pushed many American allies to reconsider Huawei's participation in developing their 5G networks.

Trump's apparent U-turn on Huawei in part reflects his concern about the harm the trade war may cause to the global economy.

"He senses that the potential damage on the global economy and the U.S. economy requires some calibration. This is why he has stepped back," said Stephen Nagy, senior associate professor of international politics at the International Christian University in Tokyo.

The ceasefire on the trade war also fits in with his past negotiating pattern.

Trump typically makes a "maximalist approach" to his demand, driving his counterpart into the corner, Nagy said. Once there is a realization that his demand is not only damaging to his counterpart but to also the U.S., he moves in and accepts a more modest agreement to make a tactical gain. "You saw that with Mexico. You saw that on North Korea," he said.

But Nagy added that the pause is unlikely to signal an end to the trade war. "[Trump] understands that being hard on China is a winning strategy for his upcoming election," he said.

Trump on Saturday said he would like to meet Kim over the weekend on the border of North and South Korea.

"I may or may not see Kim Jong Un [in Korea]. We'll see what happens," he said at his news conference. "I'll shake his hand... a lot of good things are happening over there."