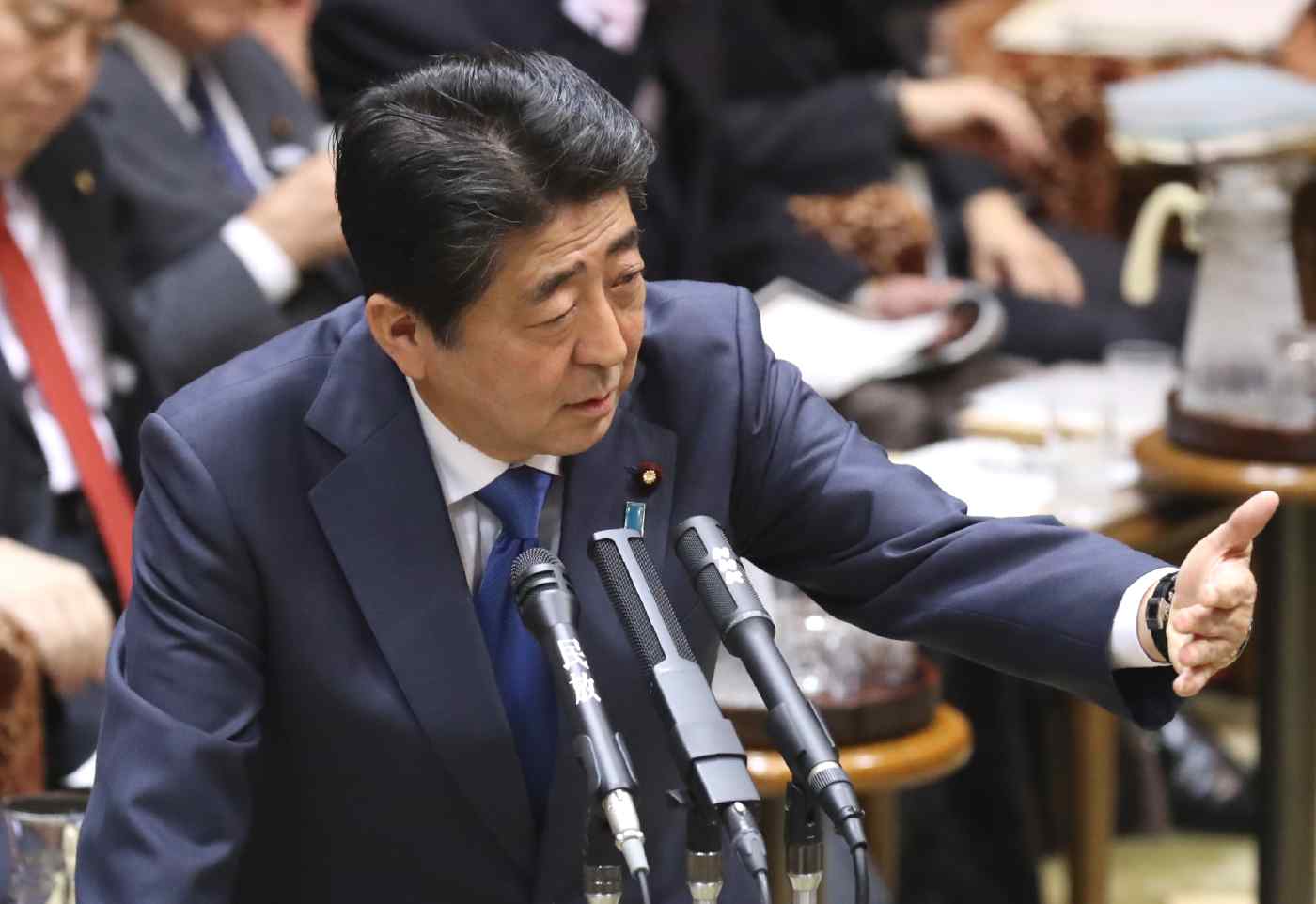 TOKYO -- A scandal linking Japanese Prime Minister Shinzo Abe to a nationalist private school operator has reignited after Finance Ministry documents related to a questionable land deal were found to have been doctored, posing a growing threat to the leader's legislative agenda and grip on power.

An investigation has also confirmed the involvement of former National Tax Agency chief Nobuhisa Sagawa, who resigned on Friday. A report naming Sagawa is expected to be submitted to parliament on Monday.

Allegations first emerged over a year ago that Abe's influence had played a role in the sale of heavily discounted public land to Moritomo Gakuen, an operator of private schools with ties to his wife Akie. The scandal re-entered the spotlight earlier this month, when it was reported that the Finance Ministry may have altered key documents related to the 2016 sale before submitting them to parliament.

Ministry officials issued a report on the matter to Finance Minister Taro Aso on Sunday, and are expected to face lawmakers on Monday. New versions of key documents will be submitted to the Diet, confirming what multiple government sources say are important deletions, such as the names of politicians.

Before the news of Sagawa's resignation broke on Friday, it was reported that an employee of the Finance Ministry bureau responsible for the land sale had been found dead, apparently of suicide.

The ministry is weighing punishments -- pay cuts or worse -- for officials involved in the document alterations. But Japan's political opposition is demanding more. "They might think they can bury the whole thing by pinning it on Sagawa," said Akira Nagatsuma, deputy chief of the center-left Constitutional Democratic Party of Japan, in a television appearance Sunday. "But that's not going to do it," he said.

"It isn't enough to fire a few bureaucrats," said Yuichiro Tamaki, leader of the center-right opposition Kibo no To, or Party of Hope. "Once the truth comes out" about the alterations, the finance minister will not be able to avoid resigning, he said.

Kazuo Shii, head of the Japanese Communist Party, said he would like to see both Sagawa and Akie Abe called in to testify. "Bureaucrats don't simply doctor data of their own volition," Shii said. "That comes from political pressure," he continued, speculating that Abe's wife, who served as honorary principal of an elementary school run by Moritomo, may have something to do with the situation.

If the ministry did indeed falsify documents, "the Abe government must resign en masse," Shii said.

The government is prepared to rebut calls for Aso's resignation, as such a step would risk placing responsibility for the scandal on Abe's shoulders. But not even Abe's Liberal Democratic Party is entirely on board with that strategy.

If the document-doctoring allegations are true, "the public needs to be told the truth," Chief Deputy Secretary-General Shinjiro Koizumi said. "This is not a problem with the administration but a problem with the entire political system," he said. The government "must demonstrate that it is not the type to simply force responsibility onto one official" and then give them the ax, Koizumi told Nikkei, suggesting that Aso and others must go as well. Others in the party have shown support for this view.

Abe's government will likely be able to contain the fallout from the scandal in the immediate term. Though opposition lawmakers have walked out of fiscal 2018 budget talks in parliament's upper house, Japanese budgets are automatically enacted 30 days after they are sent to that chamber, assuring passage by the fiscal year-end on March 31.

Other budget-related measures carry no such provision, however. If legislation such as income tax reform fails to pass this month, it will throw off revenue estimates for fiscal 2018. Opposition lawmakers could also block bills related to Abe's signature work-style reform effort, the government's top priority during the current legislative session. Debate on potential changes to the constitution, which Abe hoped to kick off sometime in 2018, could be delayed as well.

Elements of the LDP fed up with Abe's tight grip on Japanese politics could also take advantage of the scandal. Shigeru Ishiba, a senior LDP lawmaker who has clashed with Abe in the past and intends to run against him for the party presidency in September, said Sunday that it is "tough to believe ordinary bureaucrats have the authority" to alter documents as the Finance Ministry allegedly did, according to Kyodo News.

"If we cannot figure out who is behind this, trust in the LDP will suffer," Ishiba said. With regional and upper house parliamentary elections looming in 2019, a significant drop in Abe's approval could signal demand for a new face at the top of Japan's ruling party.