As the National Election Committee read out results on local TV, the CNRP estimated that it had won 46% of the popular vote to the CPP's 51%. Fresh News, a local outlet sympathetic toward the CPP, said that preliminary results showed the CPP winning in 1,163 communes across the country, down from 1,592 five years earlier, with the CNRP winning 482.

The elections are widely seen as a test run ahead of next year's national parliamentary polls, which will decide who forms the next government. At stake are 11,572 local council seats in Cambodia's 1,646 communes or municipalities.

The National Election Committee, an official body, was scheduled to being announcing preliminary results first at 5pm local time, then 7pm, before finally commencing the results announcement at 8:30pm. The delay was blamed on an internet outage.

Turnout was high at 86%, according to the NEC, with nearly 7 million of Cambodia's 7.8 million registered voters casting their ballots in what observers said was a peaceful voting day. A total pf 12 parties were seeking seats in what was widely expected to be a two horse race between the CPP and CNRP.

"We heartily applaud the voter turnout, we can say it was a peaceful election," Koul Panha, executive director of the Committee for Free and Fair Elections in Cambodia, told media.

The high turnout came despite threats of violence from the ruling party, with Prime Minister Hun Sen warning of civil war if the CPP was voted from power, while the country's defense minister vowed to "smash the teeth" of protestors if people took to the streets in the event of a disputed election.

Across Phnom Penh and elsewhere, voters lined up outside polling centers before voting opened at 7am, with most people appearing to have voted before noon.

Kem Sokha, leader of the opposition Cambodia National Rescue Party, voted in the morning at a Buddhist temple close to party headquarters in Phnom Penh. 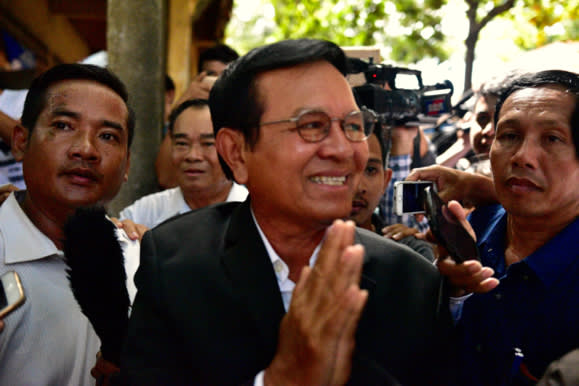 Kem Sokha, the current leader of the Cambodian National Rescue Party, the main opposition group, after voting in Cambodia's municipal elections at a polling station at Chak Angre Leu Pagoda in Phnom Penh on the morning of June 4 (Photo: Simon Roughneen)

"It's up to the people. The people have already decided," he told reporters after casting his ballot. Before the election the CNRP said it hoped to win 60% of the popular vote.

At the same polling center, Bun Lok, clad in a Barcelona football shirt, said that economic issues were the most important factor in deciding who to vote for.

"Creating jobs is the most important thing. Development [now] is mostly for the rich people," he said, in reference to Cambodia's much-vaunted economic growth, which has averaged around 7% a year over the last two decades and seen around 700,000 Cambodians find jobs in the country's garment and footwear factories, which are major source of export revenue for the government.

Indicating that both main parties regarded the elections as a bellwether for next year's national contest, Sunday's vote was preceded on June 2 by both the CPP and the CNRP staging massive final campaign rallies in the capital. The prime minister, who in the past has been reluctant to campaign in either national or local elections, took to the streets to speak to supporters.

"The opposition has done nothing but trying to stop foreign aid, preventing foreign investments, and telling the [European Union] not to import Cambodian garments. Do you call this killing or improving our living standards?" Hun Sen asked supporters at a Friday rally.

The CNRP was formed in 2012 by a merger of the Sam Rainsy Party and the Human Rights Party led by Kem Sokha in order to take on the seemingly invincible CPP, which had just won a landslide in that year's commune elections.

But the following year saw national parliamentary elections, in which an arguably complacent CPP almost lost to an energized opposition buoyed by the return of exiled leader Sam Rainsy days before the vote.

The CPP took 68 of the 123 national legislature seats to 55 for the CNRP, which claimed it had been denied a shock election win by a rigged vote. The official popular vote in 2013 showed the CPP taking 48.83% to the CNRP's 44.46%. The CNRP's estimate that it lost the popular vote in today's commune elections by 46%-51% would, if repeated at national level next year, likely see the CPP extend its long run in power.

Hun Sen has been prime minister since 1985 and the CPP took complete control of the government in 1997, after a violent purge of its erstwhile political partners.

Despite the country's economic growth, sheer longevity could be working against the incumbent regime.

"We need to change, it has been [nearly] 35 years," E Soboros, a chef from Takeo province south of Phnom Penh, said after casting his vote Sunday.