TOKYO -- An idyllic town on the northern Japanese island of Hokkaido is embroiled in a hot debate over nuclear waste, as its mayor weighs building a disposal facility there over the opposition of the governor as well as surrounding towns.

Suttsu Mayor Haruo Kataoka two weeks ago said he is considering having the town take part in a preliminary survey toward the construction of a nuclear waste facility. Municipalities that participate in the survey stand to receive up to 2 billion yen ($18.8 million) from the national government.

"As long as we have nuclear reactors, we are going to have to dispose of the waste somewhere in Japan," Kataoka said Wednesday, explaining his decision. Suttsu is located about 50 km from Hokkaido Electric Power's Tomari nuclear power plant.

The mayor has toned down his rhetoric somewhat since the original announcement, due to pushback from the town council and industry groups. He said he would not make his final decision in September as originally planned, but still appears committed to the idea.

Meanwhile, Hokkaido Gov. Naomichi Suzuki has swiftly mobilized opponents. "Hokkaido has no intention of taking on nuclear waste," he said on Aug. 13, shortly after Kataoka's announcement. "The national government is basically shoving wads of cash in our face," he also said on Aug. 18, criticizing the cash offer. 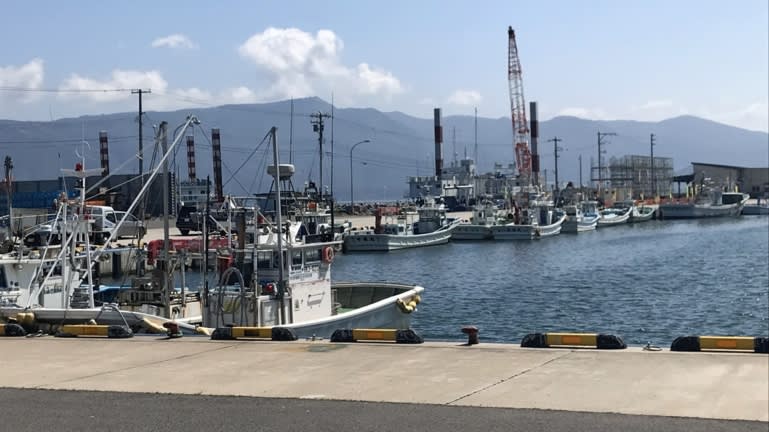 Fishermen are opposed to the idea of bringing a nuclear waste processing facility to Settsu, fearing that the reputation of their catch will be tarnished. (Photo by Toru Takahashi)

Suzuki is particularly sensitive to the subject after last year, when he allowed a research center developing new ways to dispose of spent nuclear fuel to operate through fiscal 2028, eight years longer than the original plan. His decision drew heavy criticism despite promises that the center would not bring radioactive waste into Hokkaido.

Suzuki's quick action on the nuclear waste issue is particularly notable given that he spent seven months building a consensus before deciding not invite an integrated casino resort to the region.

Opinions are deeply divided on the ground. "I understand the mayor's point, that some city or town is going to have to take care of the waste as long as we have nuclear reactors," said one Suttsu resident in her 50s.

"Hokkaido already has the Tomari power plant," said another woman in her 60s who lives in a neighboring village. "It's scary to think of nuclear waste coming to Suttsu, but I can't say I'm completely against it."

However, several local industry groups oppose the idea. Fishermen in particular worry that a local nuclear facility could tarnish the reputation of their catch.

Nearby towns and villages also feel they could face all of the risks of the nuclear waste disposal site without any payout from the national government.

"I was caught flat-footed by news reports and don't fully understand what the mayor is thinking," said a local in her 30s. "I'll see what I think after an information session for residents scheduled next month."