Some democrats and publishers retreat or flee, while others continue fight Tai was convicted last year and sentenced to 16 months' imprisonment for his leading role in the city's 2014 pro-democracy Occupy Central protests, though he is free on bail pending an appeal. Shiu Ka-chun, a fellow convicted activist from the movement, was dismissed as a lecturer at another university Monday.

In the stormy month since the Standing Committee of China's National People's Congress enacted a national security law covering Hong Kong on June 30, some activists have retreated from public roles, deleted their social media accounts or fled the city. Public libraries have taken books out of circulation and publishers have canceled releases amid uncertainty over how far authorities will go in exercising new powers to curtail civil liberties.

Late Wednesday evening, the police department's newly established national security unit made its first arrests, detaining four students aged between 16 and 21, alleging they had created an online platform calling for the establishment of a Hong Kong republic in violation of the security law's provisions on secession.

Sophie Richardson, China director at campaign group Human Rights Watch, said the arrests "raise chilling concerns of a broader crackdown" ahead of scheduled legislative polls on Sept. 6. Meanwhile, Jerome Cohen, a leading scholar of Chinese law at New York University, said on his blog that "the ripple effects of the [Tai] decision will reach much of the entire community."

Tai came under attack from Beijing's representatives and supporters in Hong Kong for organizing a primary vote last month to choose opposition legislative candidates, on allegations that the polls could constitute an act of subversion, secession or collusion with foreign powers under the security law. A co-organizer stepped down amid the repeated official warnings.

Breakazine, a quarterly magazine targeting local youth, said this week it would not distribute its new issue, which was focused on the security law and already printed, or the next one that had been planned. The editors gave no clear indication of when they will resume publication, noting "uncertainty on the understanding of implementation of the new law" in a statement on Facebook.

"The general atmosphere in the publishing sector is very nervous and worrying," said Pang Chi-ming, president of local publisher Sub-Culture.

Pang published several books by Chin Wan, a scholar known for studies on Hong Kong "localism," which recently were taken off the shelves at public libraries for review along with books by activist Joshua Wong.

"In the past, we could publish these books," Pang said. "But if it is not allowed after several years, it indicates that the freedom of speech is restricted."

Daniel Lee, founder of independent shop Hong Kong Reader Bookstore, worries that publishers will avoid issuing books that may be seen to breach the security law.

"The freedom of publishing is only getting worse," he said.

Some activists are pulling back from the front line. Anson Chan, who was the top deputy to Chris Patten, the former colony's final British governor, said just four days before the security law was enacted that she would "step back from civic and political engagement and lead a quieter life," citing the recent death of her daughter. Chan has been a vocal advocate for democratic reform, appealing for international support.

"Some people have become scared," Albert Ho, a veteran pro-democracy activist and former city legislator, told Nikkei. "I don't want to name names, but some people have dropped out" from activism.

Emily Lau, another former legislator, echoed Ho's point. "There are people who are scared," she said. "Some have even left Hong Kong, and others are trying to get out."

Taiwanese data underscores the silent exodus, as 3,161 Hong Kongers applied to immigrate to the island during the first half of 2020, more than double the figure from a year before. Permanent residency was granted to 722 arrivals. Taiwan's Mainland Affairs Council also created a new office to deal with people fleeing from Hong Kong, just a day after the enactment of the security law.

Several Western governments including the U.K., Hong Kong's former suzerain, have put out a welcome mat for Hong Kongers worried about vanishing freedoms. Britain has extended residency rights, opening a path to citizenship for about 3 million Hong Kong people from January. 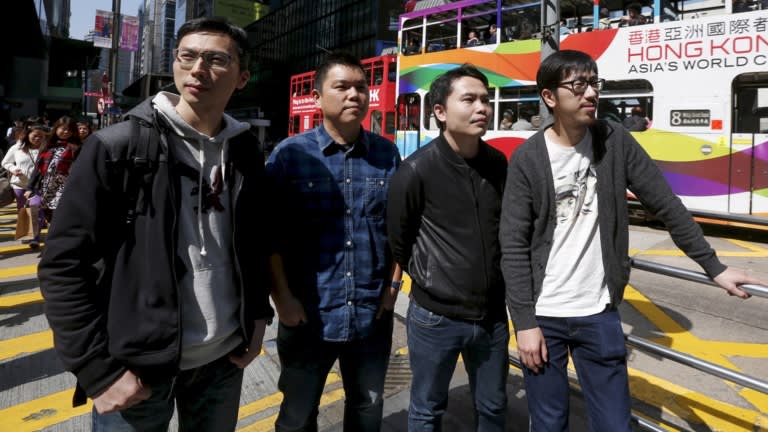 Filmmaker Jevons Au said on social media that he has moved to Canada. He directed one of the five stories in the award-winning 2015 film "Ten Years," which depicted dystopian future scenarios for Hong Kong.

However, some democracy advocates are standing their ground.

Apple Daily, a leading pro-democracy newspaper led by businessman Jimmy Lai, continues with critical reporting. Joshua Wong and others continue their legislative campaigns, though some could be disqualified by officials now reviewing their stance toward the security law and other institutions.

"Even though there is a drastic change in Hong Kong, if you stay in Hong Kong, you do what you believe in, and do it in a more clever, smart way," veteran Hong Kong journalist Lo King-wah said.

Lo directed a new documentary film depicting the state of human rights lawyers in China and their families. This could be deemed as sensitive under the new law, but he will keep on doing what he has been doing.

"But I don't know what that clever, smart way is," he said.