Police were on guard Tuesday at the Hong Kong High Court ahead of the delivery of the verdict in Tong Ying-kit's case.   © AP
MICHELLE CHAN, Nikkei staff writerJuly 27, 2021 19:57 JST | Hong Kong
CopyCopied

HONG KONG -- A Hong Kong court on Tuesday convicted a 24-year-old motorcyclist of secession and terrorism, the first verdict to be handed down under the national security law imposed on the city by Beijing a year ago.

Tong Ying-kit faces a maximum sentence of life imprisonment in the case, centered on his actions on July 1, 2020 -- hours after the security law came into effect -- when he drove into a line of police with a flag mounted on his bike reading, "Liberate Hong Kong, Revolution of Our Times."

His 15-day trial focused largely on whether, as prosecutors argued, the slogan should be considered as incitement to pursue Hong Kong independence. Tong will be sentenced at a later date.

In a rarity for a criminal trial under Hong Kong's common law system inherited from the U.K., Tong's case was heard by a panel of three judges from a pool chosen by the government, rather than a jury.

Defense lawyers argued that the slogan, coined by now-jailed activist Edward Leung during a legislative campaign rally in 2016, can carry different meanings depending on people's understanding and personal experiences. They cited research by scholars to back up the claim.

However, history scholar Lau Chi-pang added weight to the prosecution's case, telling the court that the chant was used by Tong to incite separatism, taking into account its historical context. 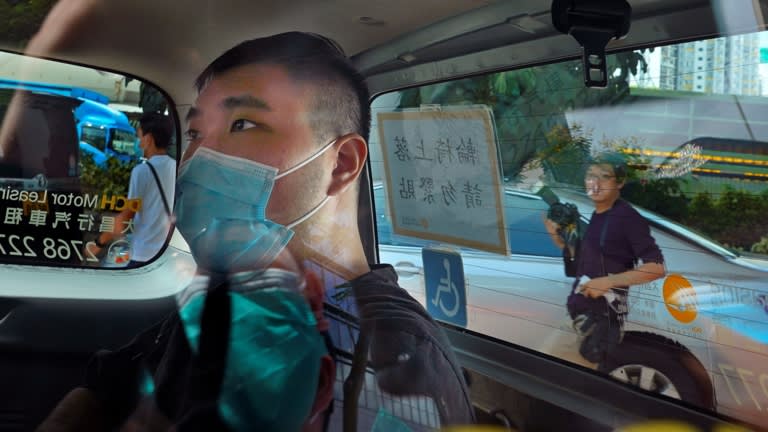 Tong Ying-kit arrives at court in a Hong Kong police van shortly after his arrest in July 2020.   © AP

In a 62-page ruling, judges Esther Toh, Anthea Pang and Wilson Chan concluded that the slogan, representing a secessionist desire to separate Hong Kong from China, is capable of inciting others to commit secession. They deemed this the political agenda advocated by the defendant.

They added that the defendant's failure to stop for all police checks, eventually crashing into one of the lines, was "a deliberate challenge to the symbol of Hong Kong's law and order."

The verdict is expected to have vast implications over other cases tied to sedition charges, in which some defendants allegedly used the same slogan. It is unclear whether chanting or displaying the slogan in the future will constitute a crime.

"Today's ruling is another blow to free expression, with one of the most open and international cities in Asia now little more than a police state," said Benedict Rogers of Hong Kong Watch, a U.K.-based campaigning group. "Handed down by three judges hand-picked by [chief executive] Carrie Lam and without a jury present, it makes a mockery of claims of judicial independence or that Hong Kong continues to maintain the rule of law."

Rogers went on to say that "the decision by Beijing to deem the waving of a flag with a popular pro-democracy slogan as 'incitement to secession' sets a grim precedent that will open the path to further arrests, prosecutions, and political trials." He also said it shows why other countries should act to ensure "every Hong Konger has a viable lifeboat and lifeline out of the city."

As of Tuesday, a total of 138 people have been arrested under the security law, of which 76 were charged, including former pro-democracy lawmakers, activists and protesters.

In a separate court decision around the same time the verdict was being handed down to Tong, one of the most prominent pro-democracy organizations in the city was fined 8,000 Hong Kong dollars ($1,030).

The Hong Kong Alliance in Support of Patriotic Democratic Movements of China, which arranged yearly June 4 commemorations of the 1989 Tiananmen Square crackdown, pleaded guilty to failing to obtain the relevant license for a museum focusing on the crackdown. The charge was brought by the territory's Food and Environmental Hygiene Department.

Due to the allegation, the venue decided to close on June 2, only four days after it reopened following a renovation and two days before the 32nd anniversary of the event.

The alliance on Monday had issued a statement saying it would not contest the case based on legal advice, given the "current difficult political environment." Earlier, the Alliance also announced that it would virtually cease all major activities by the end of the month, laying off all staff and accepting the resignations of half its standing committee members.

Three of them are either currently serving sentences or jailed without bail.

Luo Huining, Beijing's top representative in Hong Kong, said last month at a Chinese Communist Party centennial event that the territory's "genuine archenemy" was an organization advocating "the end of one-party dictatorship." Luo did not mention any names, but most assumed he was pointing the finger at the alliance.

The alliance said it will "try its best to study other means to continue the work of the June Fourth Museum" and to pursue various activities including "vindication" of the 1989 pro-democracy movement in China.