HONG KONG/TAIPEI Hong Kong's Victoria Park was once again illuminated by a sea of candles as part of the annual commemorations of China's bloody crackdown on pro-democracy protesters in Beijing's Tiananmen Square in 1989. But this year's June 4 gathering saw the lowest turnout since 2009 as splits emerged among the territory's democracy advocates.

The Hong Kong Alliance in Support of Patriotic Democratic Movements of China, or the Alliance, which organized the vigil, put attendance at 125,000, down from last year's 135,000 and the record crowd of over 180,000 for the crackdown's 25th anniversary in 2014. Police estimated the crowd at just 21,800 at the event's peak, less than half last year's official estimate.

Albert Ho Chun-yan, chairman of the Alliance, said he was impressed by a turnout that he claimed had exceeded prior estimates of 100,000, after several groups broke away to hold alternative rallies. "There have never been so many people who have, for so many years, come together on the same day at the same place to protest for the same cause -- against the tyranny of the few," he said.

Although attendance was lower this year, the group said on June 5 that it collected 1.74 million Hong Kong dollars ($224,000) in donations from demonstrators, about 30% more than last year. Hong Kong has held commemorations for those who died in the crackdown every year since 1990, an emotive tradition in a city that has chafed under Beijing's increasingly forceful rule.

Lau Yiu-fei, 43, has been here every year. "I can't stand that such terrible bloodshed happened in a place not so far away from Hong Kong," he said, adding that he attended the memorial to let Chinese authorities know that the people of Hong Kong still remember its brutal response to the democracy movement.

DEMOCRACY BEGINS AT HOME This year, however, Hong Kong's own democracy movement has revealed a rift between activists pushing for greater political reform in China and those seeking greater autonomy from the mainland. After the Umbrella Movement failed in 2014 to win full universal suffrage in selecting Hong Kong's chief executive, a number of democracy activists began calling for a more confrontational stance against Beijing; some advocate outright independence.

In an unprecedented display, activists attempted to take the podium at Victoria Park on June 4 to make the case for Hong Kong independence. They were pushed aside and the event proceeded as scheduled, but hundreds marched on to the de facto Beijing representative office in Hong Kong after the vigil ended. 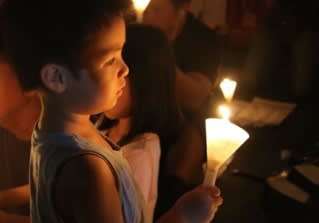 Hong Kongers of all ages lit candles in Hong Kong's Victoria Park to remember the victims of the 1989 crackdown. (Photo by Cheng Ting-Fang)

Elsewhere, nearly 1,000 people attended a forum organized by students at the University of Hong Kong. Althea Suen, student union president, said the event had achieved its goal of re-examining "the meaning of June 4, with meaningful discussions on Hong Kong's future rather than with rituals." No candles were lit, but a moment of silence was observed to remember the victims of the crackdown.

Political commentator Johnny Lau Yui-siu told the forum that Hong Kong's people should no longer rely on the "spontaneous enlightenment" of the Chinese leadership, and that they should "fight on" rather than living in the past and the memories of the June 4 crackdown.

Edward Leung, a spokesman for the pro-independence group Hong Kong Indigenous, said the territory's colonization had not ended under China's one-party rule. "It's only another slavery system," he said, adding that the only solution was for Hong Kong to be its "own master" and chart an independent course.

In another corner of the city, around 1,600 people took part in a forum organized jointly by the Chinese University of Hong Kong and 10 other schools. They took a critical stance toward the organizer of the Victoria Park vigil. Chow Shue-fung, president of the CUHK student union, said there was a clear downtrend in attendance there. "It may suggest people's alignment with us, or their growing dissatisfaction with the Alliance," he said.

Others reject the main goal of Hong Kong's older generation of activists: building democracy in the "motherland" before turning to Hong Kong's domestic problems. "You have to be very clear that you are not Chinese, but a Hong Konger, or you'll still be making pro-China decisions that lead to the demise of Hong Kong," said Baggio Leung, a leader of Youngspiration, a political group that was founded after the Umbrella Movement petered out.

WHERE THE HEART IS Taiwan had its own candlelight vigil in downtown Taipei on the evening of June 4, which was attended by prominent Tiananmen student leader Wu'er Kaixi and around 200 others. "Human rights conditions in China have only worsened" since Tiananmen, the exiled activist told reporters. "Today's China has become an authoritarian capitalist society that serves the interests of a privileged few."

Wang Dan, another prominent 1989 student leader also in exile in Taiwan, stressed the importance of sending a strong message to Beijing. "To remember June 4 is a gesture to fight against the view of the Communist Party," he said at a news conference in Tokyo on June 3.

Taiwan's new president, Tsai Ing-wen, who was sworn in on May 20, issued a statement after the island's parliament held its first-ever commemoration of the Tiananmen crackdown on June 3.

"As president, I am not trying to disparage the political system on the other side of the Taiwan Strait. Rather, I am willing to share Taiwan's experience of democratization with people on the other side in a sincere manner," Tsai said, adding that if China granted more rights to its people, "the world would respect China more."

The anniversary was commemorated in a more pro-mainland Macau as well. Organized by Antonio Ng Kuok Cheong and Au Kam San, the territory's pro-democracy legislators, a candlelight vigil was held in Senado Square, a popular tourist spot that attracts many mainland visitors.

Nevertheless, Beijing maintains the Tiananmen crackdown was justified, referring to it as a "political disturbance that took place at the end of the 1980s." Chinese Foreign Ministry spokeswoman Hua Chunying on June 3 stressed that the country had "long ago reached a clear conclusion" on the incident and its aftermath.

Pointing to the "great accomplishments" of China's economy, she said Beijing's policy "proves the path of socialism with Chinese characteristics is in line with the actual conditions of China, the fundamental interests of the Chinese people and represents a wish shared by them all."

Nikkei staff writers Joyce Ho and Cheng Ting-Fang in Hong Kong and Debby Wu in Taipei contributed to this report.