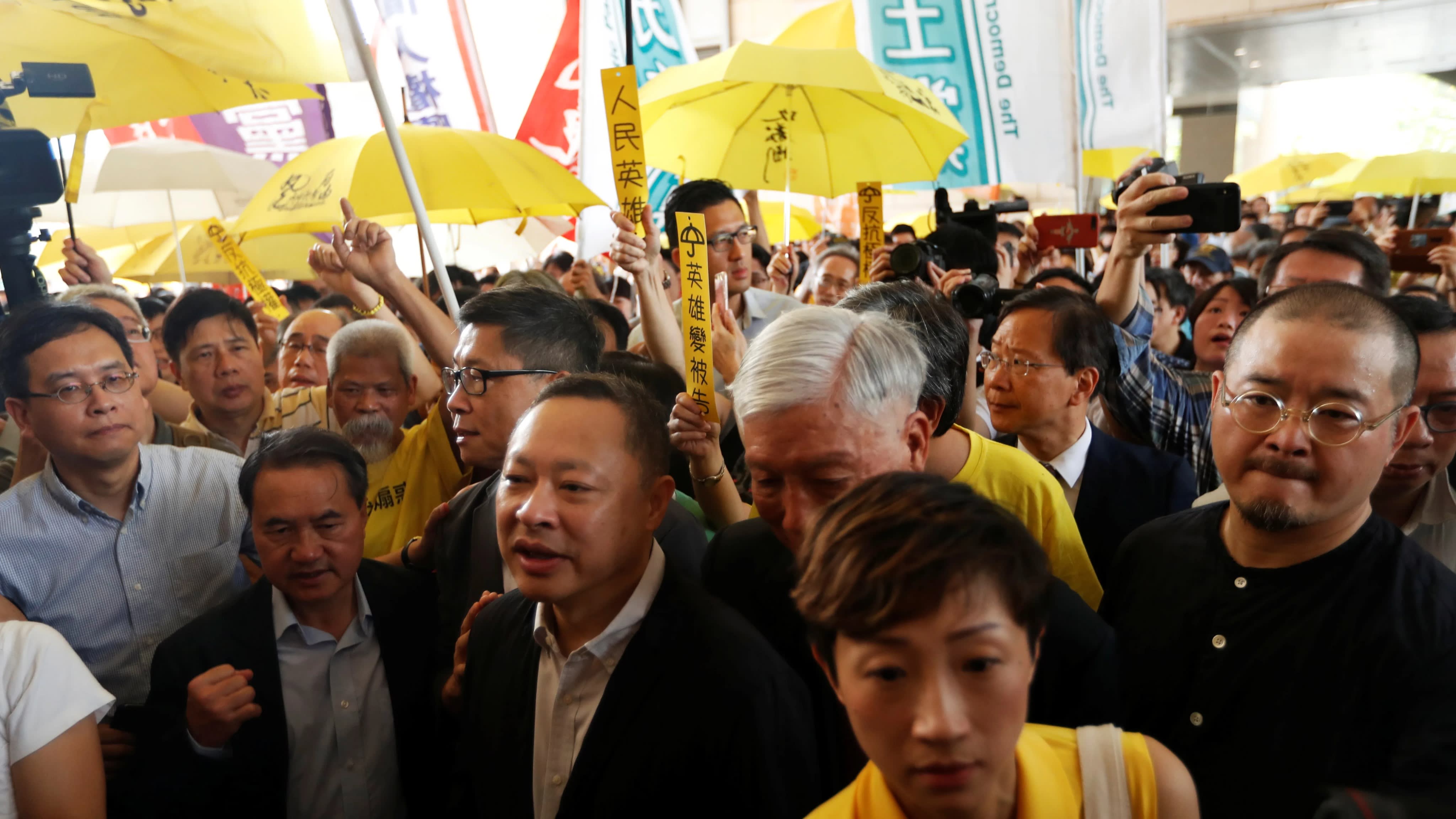 HONG KONG -- Hong Kong, once considered a beacon of hope for Chinese democracy, saw its civil liberties further diminished on Wednesday, as leaders of the 2014 pro-democracy movement were sentenced for up to 16 months in jail for their involvement in the demonstrations.

The activists had planned and led the Occupy Central protests to push demands for the democratic election of Hong Kong's leader.

The sentences added to the recent setbacks for Hong Kong pro-democracy supporters, as China's political influence grows in the former British colony.

University of Hong Kong law professor Benny Tai and Chinese University of Hong Kong sociology professor Chan Kin-man were sentenced by a district court judge to 16 months imprisonment for causing a public nuisance and eight months for inciting others to cause a public nuisance, public broadcaster RTHK reported. The sentences will be served concurrently, meaning that both men will be jailed for 16 months. Co-leader Chu Yiu-ming, a 75-year-old Baptist minister, received a suspended sentence in consideration of his advanced age and poor health.

Earlier this month, the three protest leaders and six others were found guilty for their involvement in the protests that gripped the financial hub for nearly three months in the fall of 2014.

"It is understandable that many people feel pessimistic right now," said Lee Cheuk-yan, a veteran pro-democracy activist and former lawmaker. "Even I become a bit pessimistic after what we have experienced in the past few years."

Hong Kong has served as a shelter for Chinese pro-democracy activists and was the base for Operation Yellowbird, which assisted dissents of the 1989 Tiananmen Square protests to escape arrest in China. Lee, then 32 years old, traveled to Beijing with donations gathered from Hong Kong to support the student movement, but ended up in Chinese detention and was forced to sign a confession letter before being allowed to return to Hong Kong.

For decades, many including Lee believed that democratic campaigns in Hong Kong would play a constructive role in one day realizing full democracy in mainland China. But the situation in Hong Kong has deteriorated since 2014, as the city of more than 7 million people now finds itself increasingly unable to assure its own autonomy. Pro-democracy protesters block a main road during a rally outside government headquarters in Hong Kong in October 2014 at the height of the so-called Umbrella Movement.   © Reuters

Former legislator Lee Wing-tat received the same sentence, but with a two-year suspension. Two other defendants also had their sentences suspended.

Sentencing for legislator Tanya Chan was postponed after her lawyer submitted documents on a medical emergency facing her.

In addition to the criminal prosecution against pro-democracy leaders, the Hong Kong government has adopted a much harder stance on dissent since the Occupy Central movement, especially those who support the territory's independence from China.

The 2014 demonstrations, also known as the Umbrella Movement, saw protesters blocking and camping out on major roads in Hong Kong's major business and commercial areas for 79 days to press Hong Kong's government to implement universal suffrage for the election of the city's leader. Demonstrators demanded an election based on "international standards," and rejected a plan to put forth candidates that had been approved by Beijing.

The Hong Kong government has since banned the operation of a pro-independence political party, and refused the work-visa renewal of a Financial Times journalist for hosting a talk by a leader of the party.

While the clampdown has earned praise from the government in Beijing, it has crushed the hopes of many in Hong Kong that their efforts for democracy will bear fruit.

"We have made the best effort and gathered the greatest support during the Occupy movement, yet we failed to win what we wanted," Lee said. "Nothing matters compared with the ultimate goal of Beijing to maintain stability." While Lee said the importance of Hong Kong in advancing democracy in China is diminishing, he still believes that Hong Kong cannot have a sustainable democracy with an authoritarian regime in China.

However, such notions appear to have become less prevalent among Hong Kong's younger generation. Instead of seeking dialogue with mainland authorities like the longtime democrats, the younger activists pin their hopes on support from the international community.

Joshua Wong, a student leader of the 2014 protests and a founder of the pro-democracy party Demosisto, said that his organization was "appalled" by Wednesday's sentences. "The verdict today creates a chilling effect in Hong Kong society, it will be increasingly difficult for anyone to express their opinions and to disagree with the government."

Hong Kong lawmaker Claudia Mo said the Umbrella Movement was a loss of face for Chinese leaders and prompted Beijing to tighten its grip over the city.

Mo said the latest trial of Occupy leaders is a clear example of "political prosecution and persecution," in which the governments in Beijing and Hong Kong use the judicial system as a political weapon to intimidate the opposition into silence.

"We are saddened, angry, but we refuse to feel depressed," the pro-democracy lawmaker said. "We will fight on for our generations to come."

Emily Lau, former chairwoman of Hong Kong's Democratic Party, and the first woman elected to the city's legislative council in 1991, said Hong Kong is experiencing the "worst situation" under Xi in terms of the development of civil liberties.

"We don't hold any illusion. The path to democracy is set to be hard and it's getting harder. That's why we need to keep fighting for it and work harder," Lau said.