Party support increases amid political upheaval in the US and Europe

BEIJING/HONG KONG -- While some in Hong Kong gathered to commemorate the 29th anniversary of the Tiananmen Square protests on Monday, many young people see little point in continuing to mark the event as their own pro-democracy movements come under increasing pressure from Beijing.

Lots of their counterparts on the mainland, in contrast, have little or no knowledge of the incident, with the Chinese government having tightened its control over the media.

The Communist Party’s authoritarian rule is even gaining wider support at a time when democratic regimes in the U.S. and Europe have been thrown into confusion, and memories of the events of June 4, 1989, appear to be fading.

Tiananmen Square basked in glorious sunshine on Monday. While there was undoubtedly a heavier police presence than usual, few, if any, of the tourists appeared to notice. The low-key security measures seemed to reflect the government’s confidence in having successfully suppressed memories of the incident.

Chinese human rights activist Liu Xiaobo, a leading figure during the protests, passed away in July last year. The 2010 Nobel Peace laureate was one of a number of intellectuals who went on hunger strike in the run-up to the incident and remained in China thereafter, becoming a pillar of the country’s pro-democracy movement.

Fearing that Liu’s death would stir public memories of the incident, the government clamped down on any attempts to commemorate his passing. His wife Liu Xia remains under house arrest and press reports on her status are virtually nonexistent.

The party leadership, headed by President Xi Jinping, has solidified its grip on power since its national congress in October.

“Democracy in the U.S. and Europe has become muddled everywhere, just look at the emergence of Donald Trump,” commented a Chinese man in his 50s who works for a foreign financial institution. “For China, stability is more important than anything else. The party’s guidance is indispensable.”

Political upheaval in countries like Italy and Spain has only served to reinforce such views. 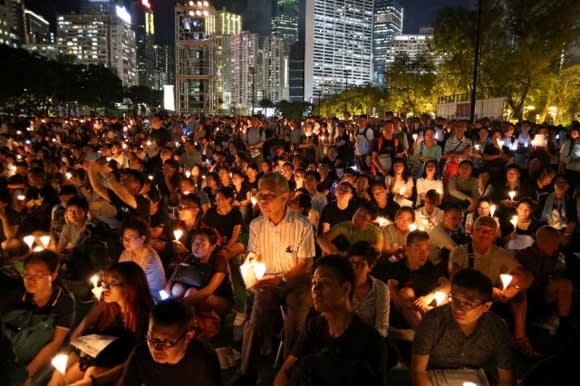 A gathering was held in Hong Kong's Victoria Park to commemorate the anniversary of Tiananmen Square protest on June 4. (Photo by Takeshi Kihara)

Changes are even emerging in Hong Kong, a bastion of the pro-democracy movement.

Democracy advocates in the territory have often stressed that democratization there cannot be achieved without similar steps being taken in mainland China, and have traditionally held commemorative events on the anniversary of the Tiananmen Square protests.

Some people did hold a gathering in Victoria Park on Monday night. According to the organizer, about 115,000 people attended the event, exceeding last year by just 5,000. But there has been a growing feeling of helplessness within Hong Kong society since the collapse of the 2014 Umbrella Movement, which demanded popular elections for the post of Chief Executive.

William Chan Wai-lam, the leader of a student group at the Chinese University of Hong Kong, decided not to attend the vigil. His peers are of a completely different mindset to the 1989 protesters, and continuing to mark the event has become meaningless, he said.

A group at the Hong Kong Polytechnic University chose to hold an exhibition on campus instead of attending the ceremony. “Many people consider the Tiananmen Square incident as having happened in a different country,” Hazel Cheng Yuet-ting, the group’s leader said. “We should focus on Hong Kong-based issues.”

According to a survey conducted by the University of Hong Kong in May, 56% of respondents said they felt a duty to support China’s democratic development, down 20 percentage points from 10 years ago.

But the more the party suppresses pro-democracy movements in the territory, the more the locals are likely to gravitate toward Hong Kong nationalism, widening the psychological gap with Beijing.