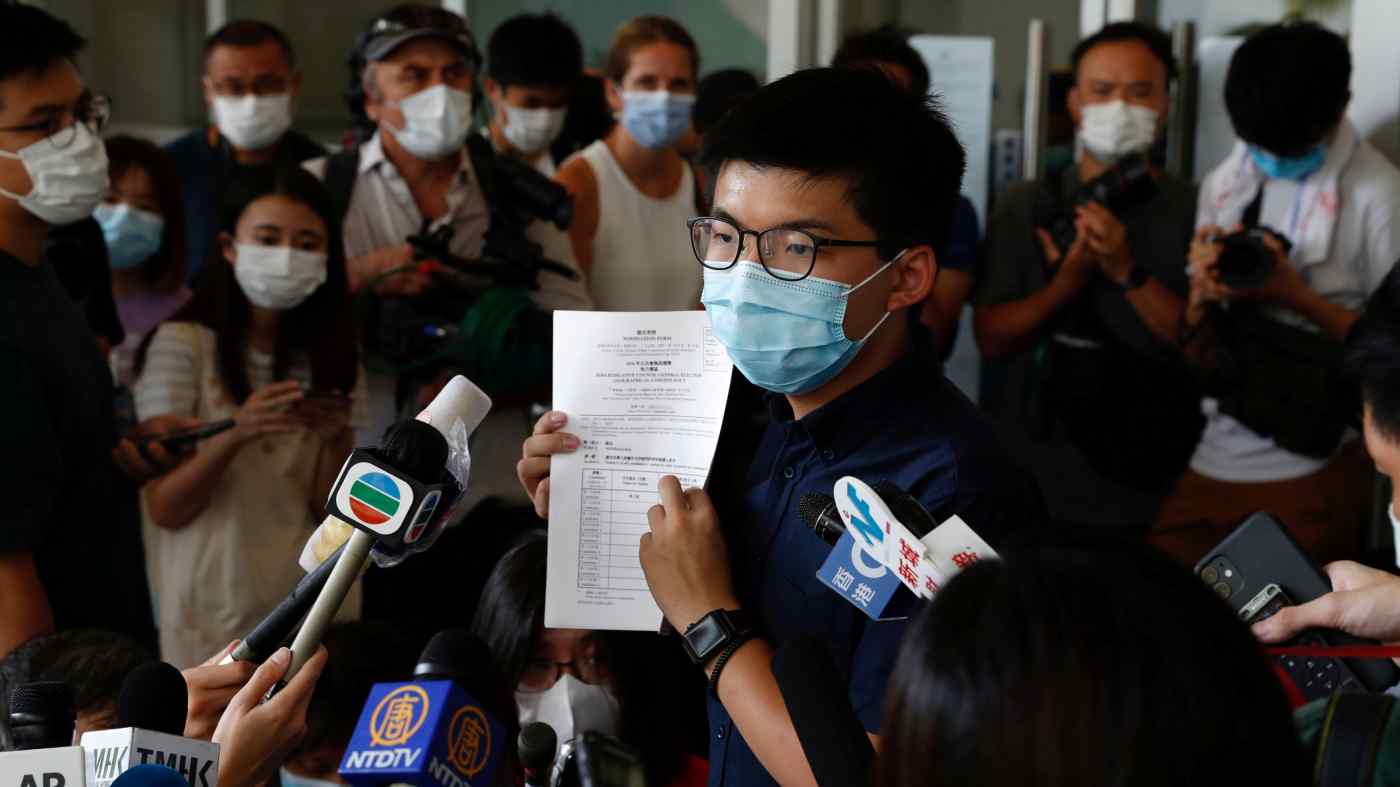 HONG KONG -- The Hong Kong government disqualified 12 opposition candidates from upcoming legislative polls, dealing a blow to the pro-democracy camp's bid to win its first majority in the chamber.

Those blocked from running include activist Joshua Wong and four incumbent members of the Legislative Council.

The disqualifications come amid local press reports that the government could soon announce a one-year delay in the polls, scheduled for Sept. 6, due to the coronavirus outbreak. The city counted a record 149 new infections on Thursday and the death toll from the outbreak has quadrupled in recent weeks.

The government said the disqualified candidates failed to comply with an election requirement to support the Basic Law, the city's constitution. It elaborated that those "expressing an objection in principle" to Beijing's move on June 30 to adopt a national security law for Hong Kong and attach it to the Basic Law could not be considered as valid candidates and suggested other hopefuls could also be disqualified.

"There is no question of any political censorship, restriction of the freedom of speech or deprivation of the right to stand for elections as alleged by some members of the community," a government statement said.

While a number of opposition candidates had expressed the expectation they would be disqualified after election officials questioned their beliefs and political positions over the past week, the scale of Thursday's move and the targeting of incumbents brought out strong reactions.

"Beijing [has] now staged the biggest-ever crackdown on the city's election, by disqualifying nearly all pro-democracy runners, from young progressive groups to traditional moderate parties," tweeted Joshua Wong. "Clearly, Beijing shows a total disregard for the will of Hong Kongers, tramples upon the city's last pillar of vanishing autonomy and attempts to keep Hong Kong's legislature under its firm grip."

"The idea that it is unconstitutional for lawmakers to oppose the national security law is totally absurd," said Chris Patten, the last British governor of Hong Kong, in comments published by Hong Kong Watch, a U.K.-based research group which he backs. "International governments must respond proportionately to this attack on Hong Kong's freedoms."

Britain, the U.S. and Australia had voiced concerns about the upcoming election earlier this week amid reports the vote could be delayed. Beijing's representative office in Hong Kong, however, voiced support on Thursday for the disqualifications.

"These candidates aim to destroy Hong Kong's prosperity and stability," the agency said in a statement. "How can we let these unscrupulous delinquents into the lawmaking body of Hong Kong?"

Candidates can file to run in the election until Friday, leaving a narrow window for replacements to step up for the disqualified 12.

Many of those disqualified competed in an opposition primary this month organized to maximize the bloc's chances under Hong Kong's complicated election rules by focusing attention on candidates with the most support. More than 600,000 voters cast ballots in the primary despite warnings from officials that the event might violate the national security law.

"When moderate candidates are also being disqualified, it shows that Beijing no longer tolerates all kinds of opposing voices," said Ma Ngok, a political science professor at the Chinese University of Hong Kong.

The opposition's victory last year, in which it won control of 17 out of 18 neighborhood councils, had fed hopes the parties could win a majority in the Legislative Council.

Under the Basic Law, repeated government defeats on key votes could force the resignation of the government chief executive and some candidates had expressed support for the idea of exercising that power. In its statement, the government cited such intentions as another grounds for disqualification.