Newsrooms navigate through new guidelines amid tightened controls over media 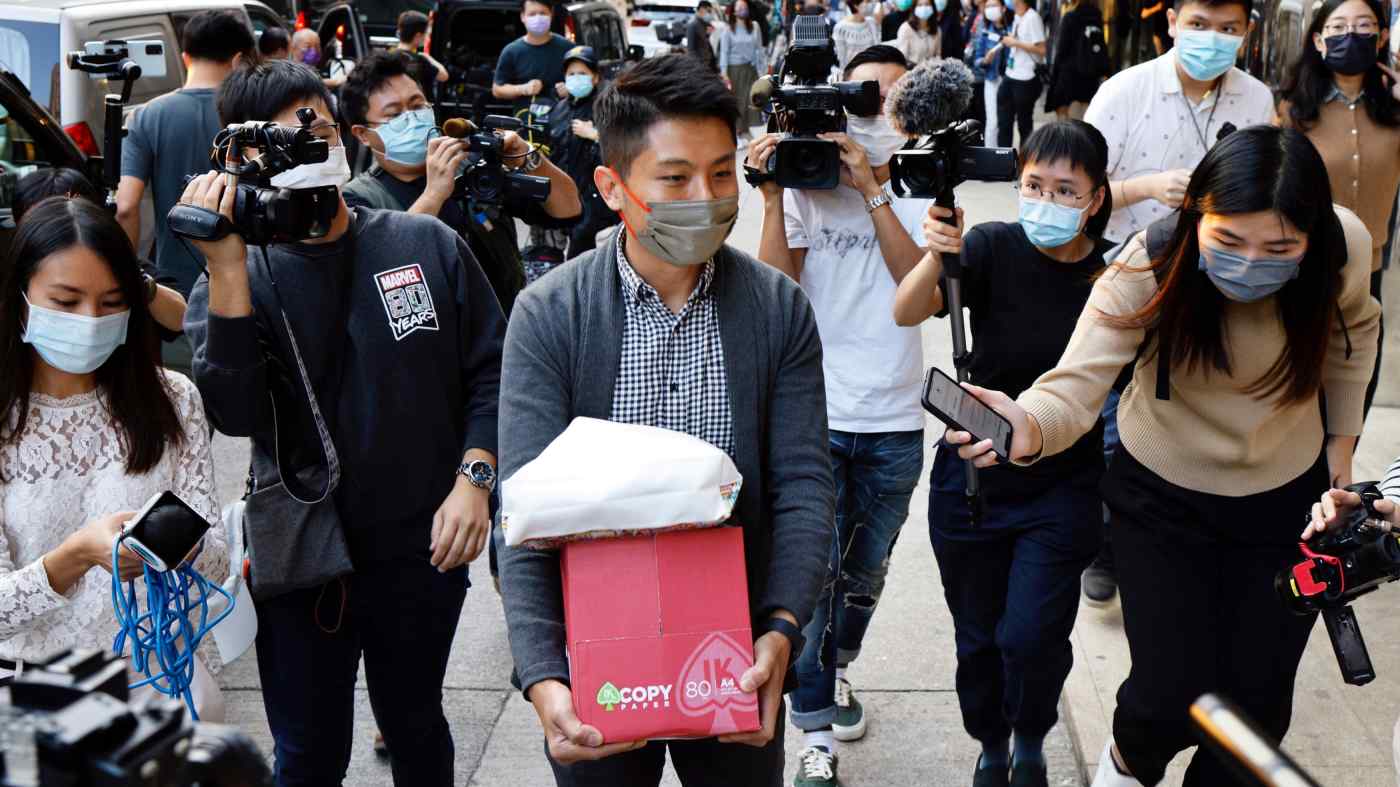 HONG KONG -- When Alex Sin Ching-fung, a senior journalist at Hong Kong's i-Cable News Channel, arrived for work one day earlier this month, he had no idea that it was to be his last in the broadcaster's newsroom, where he spent the past 12 years reporting on local current affairs.

Sin was among the 40 editorial staff members who were laid off on Dec. 1 by the news organization, Hong Kong's biggest pay-TV operator, citing pandemic-related financial difficulties.

"I was shocked. There wasn't any explanation from the management. I was only told that I had to go immediately," the veteran news reporter told Nikkei Asia. "The management seems to prefer junior reporters, who are less rebellious and easier to work with."

Industry observers say that the mass dismissal of experienced reporters stemmed from i-Cable's desire to rein in the television station's news coverage -- rated by the Chinese University of Hong Kong as one of Hong Kong's most trusted news sources.

"It is difficult not to see this as minimizing sensitive reporting in the name of cost-cutting," the Hong Kong Journalists Association said in a statement. Journalists surround a police van in Hong Kong. On the press freedom index compiled by Reporters Without Borders for 2020, the city fell to 80 out of 180 countries and territories.   © Reuters

In the wake of last year's citywide anti-government protests, local authorities have stepped up control over both local and foreign media organizations, which have long enjoyed press freedom underpinned by the Basic Law, the city's constitution.

On the annual press freedom index compiled by Reporters Without Borders for 2020, Hong Kong fell to 80 out of 180 countries and territories, on par with Israel and Serbia. Just 10 years earlier, the former British colony was in 34th place.

Those who were dismissed at i-Cable include award-winning journalists on the China desk, as well as all of the investigative reporters working for News Lancet -- the channel's flagship program, known for its in-depth and critical reporting.

Sin noted that for journalists leaving i-Cable it will be difficult for them to find another "safe haven" where they can report freely, as most local media outlets in Hong Kong are now owned by pro-Beijing businesspeople.

Following the dismissals, more than a dozen reporters and editors resigned to protest against the company's decision.

The broadcaster said it seeks to "achieve manpower and resource consolidation" through the restructuring. "We will continue to produce quality news and public-services programs through this new operation model," i-Cable said in a statement.

The Hong Kong Police Force in September issued new guidelines for journalists and media organizations, under which police will only recognize government-registered reporters and what the force described as "internationally renowned" media.

That will limit some journalists' access to official press briefings and to restricted areas during police operations, a move that press associations have described as accreditation for media. Journalists working from behind barriers cover the opening ceremony of a temporary national security office in Hong Kong in July.   © Reuters

In mainland China, where all media are strictly censored and controlled by the Chinese Communist Party, journalists have even narrower room for independent reporting. Journalists often face the risk of arrest and some receive warnings over their reporting.

"Beijing officials have repeatedly emphasized its 'complete jurisdiction' over Hong Kong. It is obvious that removing dissident voices has become a paramount policy," said Bruce Lui, a longtime China watcher and a senior journalism lecturer at Hong Kong Baptist University.

"Media play an important role in the city's social ideology," Lui said. "Therefore, Beijing sees an imminent need to tighten its oversight on the press."

The national security law, Lui said, targeted the press by stipulating that authorities will take "necessary measures to strengthen guidance, supervision and regulation" of the media, over matters concerning national security.

The sweeping security law, imposed by Beijing at the end of June, prescribes criminal penalties of up to life imprisonment for those found guilty of separatism, subversion, terrorism or collusion with foreign powers. Suspects can be extradited to mainland China for trial.

Still, crackdowns on the media by authorities have prompted citizens to push back by supporting pro-democracy publications.

Following the arrest of media mogul Jimmy Lai -- who is facing several charges, including collusion with foreign forces under the security law, and is currently in detention -- and the raid of his Apple Daily newspaper's headquarters in August, Hong Kong people rallied to buy copies and place advertisements in the publication.

More than 600,000 people have subscribed to its digital publication, providing a lifeline for the money-losing news organization, which is owned by Lai's publicly listed Next Digital. 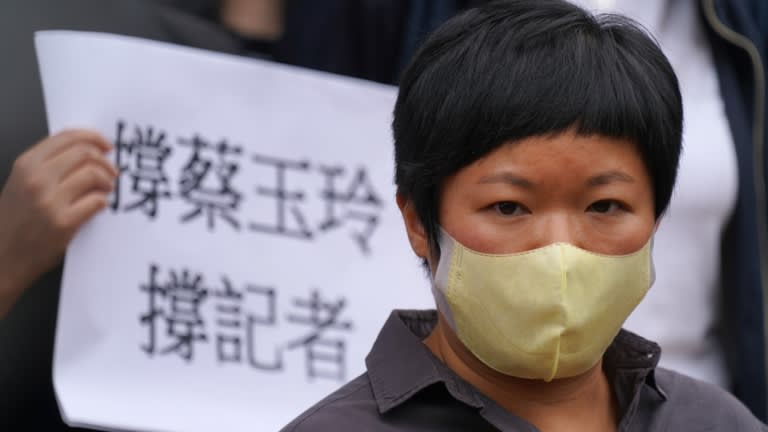 After being released on bail, Choy, a producer for public broadcaster RTHK, said she had always abided by professional journalistic ethics and "did what should be done." Choy could face up to six months' imprisonment if convicted.

Hong Kong Free Press, or HKFP, an independent online media organization largely funded by donations, has seen its monthly donors surge from 100 to 700 since the protests began last year. The amount of donations last year tripled from the previous year to about 6 million Hong Kong dollars ($774,000).

Tom Grundy, the founder of HKFP, said the donation-based business model has allowed the publication to operate without commercial considerations and thus prevent self-censorship. "Even after the national security law, we are doing daily reporting as usual," he said. "The last thing we want to do is to self-censor and think ahead of the authorities."

Some Hong Kong publications have been criticized for self-censoring news on sensitive political issues so as not to lose advertising dollars.

Recruiting talent, however, has been a challenge for HKFP -- a recent attempt to hire an Irish journalist fell through after local authorities denied his visa application without an official reason. As a result, the publication now requires all applicants to be permanent Hong Kong residents.

Press associations also have said work visas for foreign journalists have been delayed in recent months, while local media have reported that a new national security unit is now responsible for vetting journalists' visa applications, dealing a blow to Hong Kong's long-established position as the Asian headquarters for English-language news outlets.

Grundy said that although he hopes to continue to conduct on-the-ground reporting in Hong Kong, he would consider moving the company to Taiwan as "the last resort" if the situation deteriorates.

Major Western media outlets for decades have located their regional headquarters in the city, including The New York Times, The Wall Street Journal and the Financial Times. Shortly after the national security law took effect, the Times said it would relocate its Hong Kong-based digital news operations to Seoul.

"China's sweeping new national security law in Hong Kong has created a lot of uncertainty about what the new rules will mean to our operation and our journalism... We feel it is prudent to make contingency plans and begin to diversify our editing staff around the region," Times executives wrote in a staff memo.

Fewer journalists in Hong Kong covering the government and local issues is a growing concern for those remaining in the city.

"The worse the situation is, the more our society needs good journalism," Sin, the dismissed i-Cable journalist, said. "The best way to protest against any form of redlines and suppression is to press on with reporting as usual."