HONG KONG -- A meeting in Hong Kong's legislature on Friday descended into physical clashes among lawmakers, as members from opposing parties fought for the chairman role of a key committee that will determine whether important bills, including a controversial national anthem law, can be passed before the current legislative term ends in July.

The Legislative Council House Committee meeting saw lawmakers pushing and scuffling with each other, and several pro-democracy lawmakers were evicted from the meeting venue by security guards.

Democratic Party lawmaker Andrew Wan Siu-kin was injured in the skirmishes and carried away by ambulance.

The showdown comes as Beijing's offices overseeing the city criticized pro-democracy lawmakers for using filibustering tactics to paralyze the Legislative Council, in rare statements that openly commented on the lawmaking body's agenda. Democratic Party lawmaker Andrew Wan Siu-kin is taken away by ambulance personnel after scuffling with security and pro-China legislators during a House Committee meeting in Hong Kong on Friday.   © Reuters

The pan-democratic camp, the minority in the semi-autonomous city's de facto parliament, has been stalling the election of a committee chair since last October in order to delay the passage of a proposed national anthem bill. Under the bill, people who "intentionally insult" China's national anthem, "March of the Volunteers," could face fines of up to 50,000 Hong Kong dollars ($6,450) and three years in prison.

Beijing's Hong Kong and Macao Affairs Office and its liaison office in the city have accused pro-democracy lawmaker Dennis Kwok, who has presided over the committee, of violating his oath and misconduct in public office, hinting that he might be disqualified if he continues to delay the vote on the chairmanship.

A total of six pro-democracy lawmakers have been disqualified in the current legislative term.

Both camps have sought independent legal advice and claim that they have the power to preside over the committee meeting before a chairman is elected. LegCo's in-house legal advisers, who originally agreed on the pro-democracy members' interpretation, reversed their stance after Beijing weighed in.

"It's absolutely shocking... Frankly, as a lawyer, I can't see why [the 180-degree turn] is possible," Kwok said. He called the removal of pro-democracy lawmakers from the meeting room "unlawful" and "illegitimate." 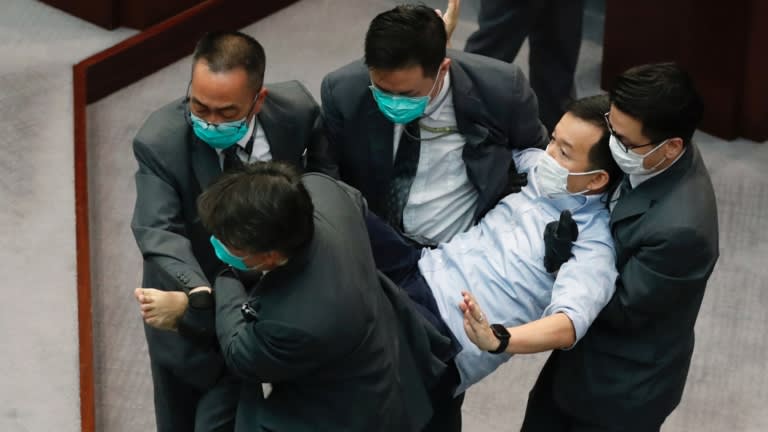 Pan-democratic legislator Raymond Chan Chi-chuen is taken away by security during the House Committee meeting in Hong Kong on Friday.   © Reuters

"I hope all members of the Legislative Council can stay calm so that we can handle urgent and essential business," said Starry Lee, who managed to take the chairman's seat with pro-government allies and security guards surrounding her.

Lee is the chairwoman of the city's biggest pro-establishment party, the Democratic Alliance for the Betterment and Progress of Hong Kong.

Friday's chaotic scene was reminiscent of last year's committee meetings when a now-withdrawn extradition bill -- a law that would have allowed people in Hong Kong to be extradited to mainland China for trial -- was debated in the legislature. The bill led to anti-government protests that lasted for months before the coronavirus pandemic subdued mass demonstrations.

"It shows that the government learned nothing from its past failure," said pro-democracy lawmaker Tanya Chan, while warning that mass protests could flare up again if the government continues to reject oppositional voices.