The mass resignation of 15 other lawmakers means that Hong Kong's legislature will operate without opposition for the remainder of its extended term, not unlike the rubber-stamp parliament in mainland China.

"Today's decision shows that Beijing has completely given up on 'one country, two systems'," Wu Chi-wai, chairman of the Democratic Party, the largest opposition party in Hong Kong, said at a late afternoon news conference, referring to the framework governing the city after the 1997 handover to China from the U.K.

"We have tried our best in the past 23 years to hold China to its promise of universal suffrage," Wu said. "We will find a new path to continue to fight for democracy. We will not be defeated."

The four lawmakers from the pro-democracy camp were stripped of their seats immediately after the new resolution was passed by the National People's Congress Standing Committee, or NPCSC, and reported by the state-run Xinhua News Agency. 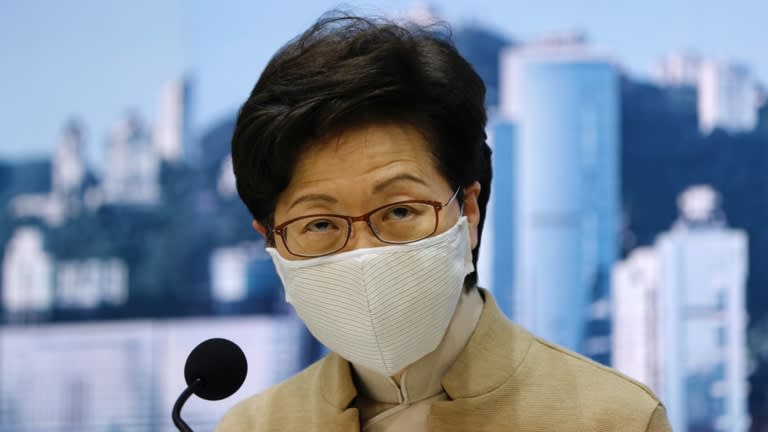 The disqualified lawmakers -- Alvin Yeung, Kwok Ka-ki, Dennis Kwok and Kenneth Leung -- had been banned from running in Legislative Council elections that were scheduled for September due to a finding that they had failed to uphold the Basic Law, the city's constitution.

Wednesday's announcement referred to this finding, which appeared to be based on the lawmakers' support for the U.S. government's Hong Kong Human Rights and Democracy Act of 2019 and sanctions imposed on local officials in relation to last year's anti-government protests.

The legislative elections have been postponed until next year due to the coronavirus pandemic.

"There will be no future for this legislature," Leung said after the government's announcement. "The disqualifications will make Hong Kong's legislative body ineffective."

In a news conference before the mass resignations, Hong Kong Chief Executive Carrie Lam defended Beijing's decision, saying that the central government had the authority to interpret the Basic Law and handle problems arising from its implementation.

"The resolution did not empower me to disqualify lawmakers," Lam said. She said that the decision was made based on the Basic Law and other ordinances, including the recently enacted national security law.

Lam said she was "excited" that government bills might be passed more quickly in the Legislative Council without opposition lawmakers but insisted it would not be a "rubber-stamp" body.

"Even within the pro-establishment camp, there are different voices," she said. "We, myself, welcome diverse opinions." Ivan Choy Chi-keung, senior lecturer at the Chinese University of Hong Kong's department of government and public administration, said the decision shows that Beijing has taken a strategy of "all-around suppression" of Hong Kong's pro-democracy groups.

"The national security law suppresses the radical part of the pro-democracy camp," he said. "But today's decision clearly shows that the survival space for milder voices has also been scrapped."

The resolution passed by the NPCSC stipulated that lawmakers would be disqualified if they are ruled to have promoted or supported Hong Kong independence, refused to acknowledge China's sovereignty over Hong Kong, sought foreign forces' interference in Hong Kong affairs or committed other acts that jeopardize national security.

China's state-owned Global Times newspaper described the disqualification of the four as "a justified and long-awaited move" to prevent unpatriotic lawmakers from being elected.

Hong Kong has been embroiled in political turmoil since June 2019 when massive street protests forced the government to retreat from a proposal to expedite the extradition of criminal suspects to mainland China and other places.

Opposition parties then swept elections for neighborhood councils several months later, boosted by public anger over the forceful response of the police to continued protests and the government's refusal to address demonstrators' other demands.

The political atmosphere shifted again this past June when Beijing imposed a new national security law over the city, creating the possibility that anyone suspected of acts involving secession, subversion or collusion with foreign forces could be sentenced to life imprisonment in the mainland.

"If observing due process, protecting systems and functions, and fighting for democracy and human rights would lead to the consequences of being disqualified, it would be my honor," Kwok, one of the four lawmakers forced out of the Legislative Council, said.