HONG KONG -- Hong Kong politicians will be ousted from public office and barred from running in elections for five years if they fail to properly take new oaths of office and pledge loyalty to Beijing and the local government, according to a proposal marking the beginning of an electoral overhaul in the city.

The planned legislation, approved by Chief Executive Carrie Lam and her de facto cabinet on Tuesday, will require all public officers, including neighborhood-level district councilors, to take a pledge of allegiance. Lam or her appointed officials will monitor the oath-taking procedures.

The legal amendment is set to challenge opposition politicians who scored a landslide win in 2019 District Council elections, sweeping 388 out of 479 seats in the bodies which are mainly responsible for community issues. The bodies were previously controlled by pro-government parties.

Four district councilors will be disqualified automatically once the bill is passed, Secretary for Constitutional and Mainland Affairs Erick Tsang said at a news conference. They were barred last year from running in Legislative Council elections on the grounds that they failed to comply with a requirement to support the Basic Law, Hong Kong's constitution.

Last year's vote, originally scheduled for September, was postponed a year because of the coronavirus pandemic. 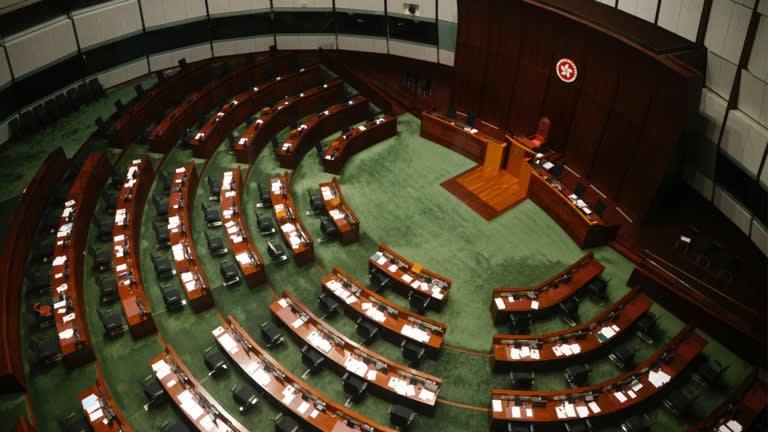 Last year's Legislative Council election, originally scheduled for September, was postponed for one year because of the coronavirus pandemic.   © Reuters

According to Article 104 of the Basic Law, the chief executive, principal officials, executive council members, lawmakers and judges must take an oath of office. The new draft bill would extend this requirement to district councilors.

Tuesday's proposal came one day after a top Beijing official overseeing Hong Kong said that "anti-China" opposition forces must be blocked from governing bodies, signaling sweeping change to the city's electoral system ahead of the upcoming legislative polls.

"Destroyers of the 'one country, two systems' principle should not be allowed to take a share of the Hong Kong Special Administrative Region's political power," he said. "Not now, not ever."

A "positive list" and a "negative list" will be introduced under the proposed law to adjudge whether a councilor's oath is "genuine," Tsang said. "Positive" behavior would include safeguarding national interests, such as endorsing China's sovereignty over Hong Kong, while acts that endanger national security, promote Hong Kong independence or collude with foreign forces, will be deemed "negative."

Although the law itself will not be retroactive, past activities will be taken into account when the pledge is assessed, Tsang said. The justice secretary can suspend councilors seen as breaching their oath before a court's final decision.

The bill will be published on Friday and introduced in the legislature on March 17. It is expected to be passed with little opposition, as pro-democracy legislators resigned en masse last November to protest against Beijing's decision to unseat four colleagues.