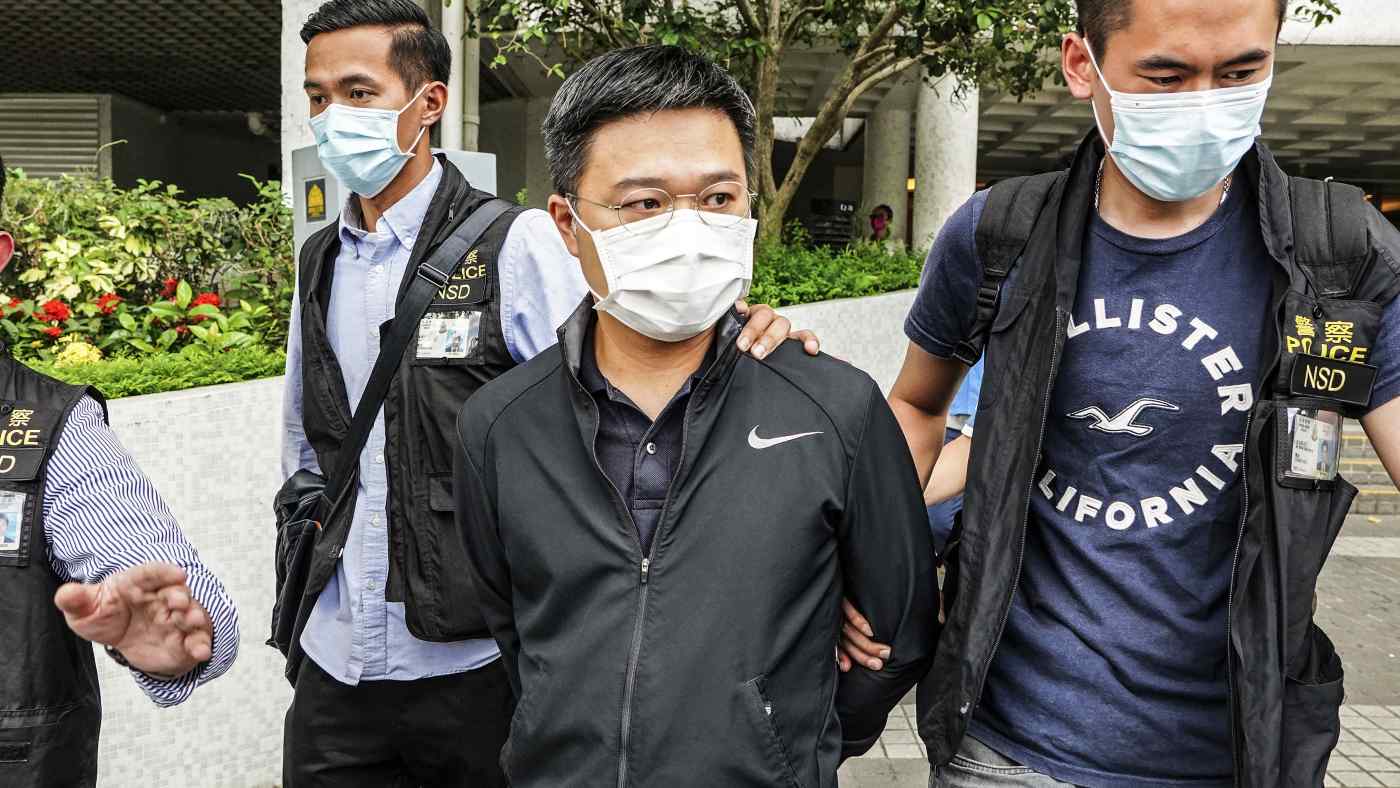 Collusion with foreign forces is one of four offenses created under the national security law imposed on the city by Beijing a year ago.

In two news releases, the government said the offices of Apple owner Next Digital and the homes of the five people arrested were searched. This was part of "gathering evidence for a case of suspected contravention of the national security law," as police secured a warrant allowing for the seizure of journalistic materials.

Speaking to reporters outside Next's offices, Steve Li Kwai-wah, senior superintendent of the police national security department, said the allegations related to over 30 articles published in print and online, in Chinese and English, that he said urged foreign governments and institutions to impose sanctions on Hong Kong and China.

"We have very strong evidence that questionable articles play a very crucial part for the conspiracy, which provide ammunition for foreign countries, institutions and organizations to impose sanctions," he said.

Li warned Apple Daily employees to be "careful" not to spread unlawful material and did not rule out further arrests. He said 18 million Hong Kong dollars ($2.32 million) of assets of three Next Digital subsidiaries had been frozen by authorities. Police cited some 30 articles published by Apple Daily said to have urged foreign governments to impose sanctions on Hong Kong and China.   © EPA/Jiji

In a subsequent news conference, Secretary for Security John Lee said police were targeting a conspiracy involving companies promoting illegal messages "in the name of the press," not normal media operations. He urged journalists to "keep a distance from these criminals" though he added," It is your choice whether you will regard them as part of you."

Beijing's top official representatives in Hong Kong, known as the Liaison Office, called the police operation "an act of justice" on its official Weibo account. "We firmly support any efforts to protect national security which bring about prosperity and stability in Hong Kong," it said.

Over 500 police officers were deployed in the operation, starting from 6 a.m., Li said. Officers blocked all entrances to the media company's headquarters in the eastern Kowloon neighborhood of Tseung Kwan O.

One Apple Daily reporter said she was blocked from entering while police searched what Li described as a "crime scene." In a letter to readers, the paper said police took away 38 computers with news materials. The search ended around 2 p.m.

Jimmy Lai, the founding chairman of the paper, is serving a 20-month prison sentence after he was convicted in three cases for joining unauthorized assemblies in 2019. His controlling stake in Hong Kong-listed Next was frozen last month by the authorities, who cited security law collusion charges that he also faces. Police blocked all entrances to Next Digital's headquarters as officers searched for evidence on June 17.    © AP

Despite the latest setbacks, Lam Man-chung, executive editor-in-chief of Apple Daily, said reporters and staff will "exert utmost efforts to publish the newspaper as usual," the publication reported in an online story.

Apple's labor union, meanwhile, condemned the authorities for "severely infringing on press freedom, using the national security law as pretext," warning of the dangers of criminalizing reporting of news after the fact.

"Even though the present situation is adverse, all our colleagues will continue reporting and do all we can to maintain the ordinary publication of the paper," the union said in a statement.

Taiwan Foreign Minister Joseph also criticized Hong Kong's moves. "Authoritarianism is waging a brutal war on @appledaily_hk, a desperately endangered symbol of freedom in #HongKong," he tweeted from his official account, "I'm out of words to describe my anger & sadness at witnessing this tragedy."

Sophie Richardson, China director at campaign group Human Rights Watch, meanwhile said: "Hong Kong police's raid on Apple Daily is a new low in a bottomless assault on press freedom... Hong Kong authorities should be ashamed of themselves for selling out the freedom of expression."

Democracy activist Richard Tsoi, who faces criminal charges over leading an unauthorized commemoration of the 1989 Tiananmen crackdown, said, "It is hard to understand or believe the police already got enough evidence to blame Apple Daily for breaching the national security law." He added, "Searching a media institution is breaching the freedom of expression and the press."

A Hong Kong-based rights group, meanwhile, announced it had almost completely purged its website archive in reaction to Thursday's arrests. The Information Center for Human Rights & Democracy said it would leave up only posts related to the Tiananmen incident.

Ahead of the market open in Hong Kong, Next Digital announced that trading in its shares would be suspended until further notice.