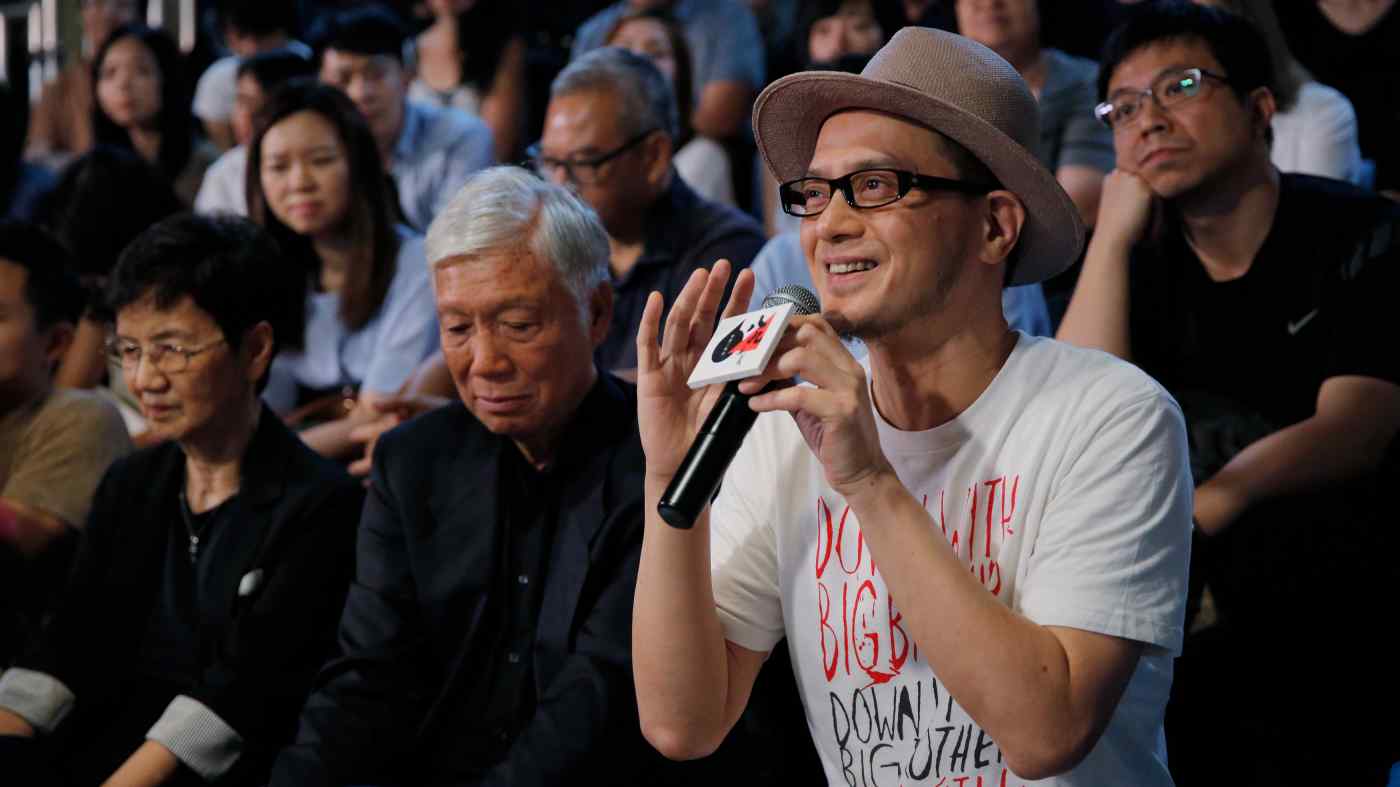 Officers from the Independent Commission Against Corruption (ICAC) arrested Wong in relation to his performance at a by-election campaign rally on March 3, 2018, with the agency saying his singing of two songs at the event on behalf of candidate Au Nok-hin violated an ordinance barring anyone from providing food, drink or entertainment to influence voters.

Au beat three rivals to win that Legislative Council election, but was later removed from office after the courts queried the government's handling of the disqualification of Agnes Chow, the opposition camp's original nominee for the seat.

Already in custody on national security law charges over his participation in a 2019 opposition primary, Au was also arrested in the new case on Monday.

Wong, a 59-year-old Cantopop singer-songwriter known for supporting the city's democracy movement and advocating for LGBT rights, sang his popular tune of "A Forbidden Fruit A Day" during Au's rally.

The song, which debuted in 1996, referenced the now-closed pro-democracy newspaper Apple Daily.

"It's a song about Hong Kongers. We should not disqualify ourselves from making our own choices," Wong said then. "We need to choose the fruit we want to eat."

Wong was released on bail later Monday and he and Au are due to enter pleas in court on Thursday. If convicted, he faces a potential seven-year prison term and 500,000 Hong Kong dollar fine ($64,333).

An ICAC spokesperson said in a statement on Monday that providing others with entertainment at an election is "a serious offense."

"Candidates, election agents, helpers and members of the public are reminded to refrain from offering food, drinks or entertainment during an election in exchange for votes," the spokesperson said, adding that the commission has commenced a series of "multifaceted education and publicity programs to promote a clean election culture."

Hong Kong is set to hold its next legislative election in December after a Beijing-driven overhaul slashed the proportion of democratically elected seats and gave the government and security officials powers to vet candidates for disloyalty to the local or national government.

Benny Tai, a former University of Hong Kong law professor, and two others were arrested by the ICAC last week in relation to advertisements they placed in local newspapers ahead of a 2016 election, as part of a "strategic voting" campaign by pro-democracy groups. The anti-graft agency said the trio had illegally incurred election expenses which are supposed to be paid for only by candidates or their campaigns.

Tai, like Au, is in detention in relation to the opposition bloc's 2019 primary.

Many opposition figures have been charged with protest or national security offenses in the wake of anti-government protests in 2019. Some, including former lawmakers Nathan Law and Ted Hui, have gone into exile abroad to continue their advocacy work.

In another case involving the 2018 by-elections, Wong Wai-ha, a former assistant to Starry Lee, chairperson of the Democratic Alliance for the Betterment and Progress of Hong Kong, was sentenced to eight months imprisonment in May for distributing gift bags to residents to encourage votes for a candidate from the DAB, the largest pro-government party and the biggest in the legislature.

Lee was not charged in the case. She claimed that neither she nor her office were aware of the gift distribution.