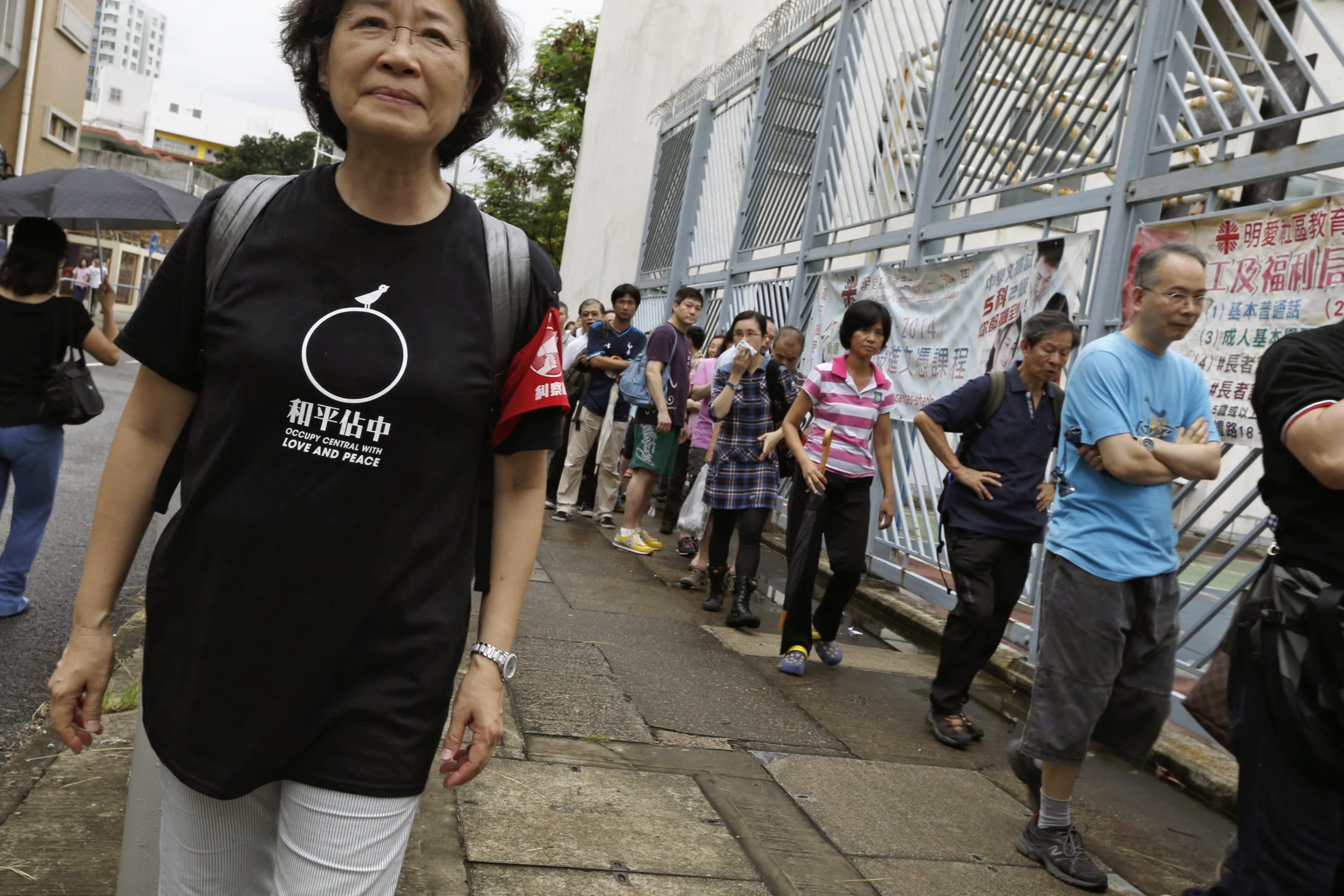 A volunteer for the Occupy Central movement looks on as voters line up outside a polling station during the unofficial referendum in Hong Kong on Sunday.
NORIKO OKEMOTO, NQN staff writerJune 25, 2014 13:00 JST | China
CopyCopied

HONG KONG -- Hong Kong is bracing for a planned protest in the Central financial district that could start as soon as July 1.

On that day 17 years ago, the U.K. handed over control of Hong Kong to China. Beijing adopted a "one country, two systems" policy for the territory, but has gradually tightened its grip on politics here.

The planned protest, called Occupy Central with Love and Peace, is being organized by a pro-democracy group of the same name. It wants to pressure the central government to stick to its promise of allowing universal suffrage for the 2017 chief executive election. It fears that Beijing will hand-pick the candidates while claiming to hew to democratic principles.

Anti-government groups have held an annual march on July 1 to air their discontent with the government since 2003, but the Occupy campaign may attempt to win wider support by linking the two events.

Hong Kong media have been covering the Occupy Central story daily. It essentially threatens to shut down Central through a mass sit-in. The district is home to the stock exchange, the monetary authority, and major banks including HSBC.

To prepare for the possible sit-in, the monetary authority held drills with 55 banks in the district on June 14. The monetary authority ran tests to ensure that its back-office email and other communication tools were functioning properly and had major banks submitted contingency plans. Local media reports said HSBC has positioned its large branch in the northern part of the Kowloon Peninsula as an emergency back office.

Kit Wong, senior research analyst at Athena Best Financial Group, said that the market remains calm and no particular issues have come under selling pressure in line with the Occupy Central protest. He expects the Occupy action to end without major incident, but he also warns foreign investors could pull their funds out of Hong Kong should riots occur, dragging down the entire market.

The Occupy campaign was sparked by a January 2013 article by Benny Tai Yiu-ting, an associate professor of law at the University of Hong Kong. In the article, Tai proposed a nonviolent occupation of the financial district, Hong Kong's lifeline, instead of the usual protest marches, to pressure Beijing to allow genuine universal suffrage.

On June 18, cyberattacks were launched against Occupy Central's online voting system, which was polling residents on different election methods. In response, the group announced it would hold voting for ten days through June 29, instead of the original plan for a three-day vote.

After the vote, the pro-democracy group plans to submit its proposals on election reform to the government. If the proposals are rejected, it will likely galvanize the Occupy movement. However, Tai stated on June 23 that he would give the government some time to respond to the group's proposal, hinting the actual occupation, if it proceeds, would take place later in the year.

According to the organizer of the unofficial referendum, more than 730,000 people registered their opinions over the first five days through June 24. In addition to the Internet voting platform, 15 polling stations were opened throughout the territory on June 22 to invite further participation. The turnout has been higher than the organizer expected, already reaching over 10% of the population. Given the likelihood that Beijing will reject the proposal, tensions are expected to mount even more.