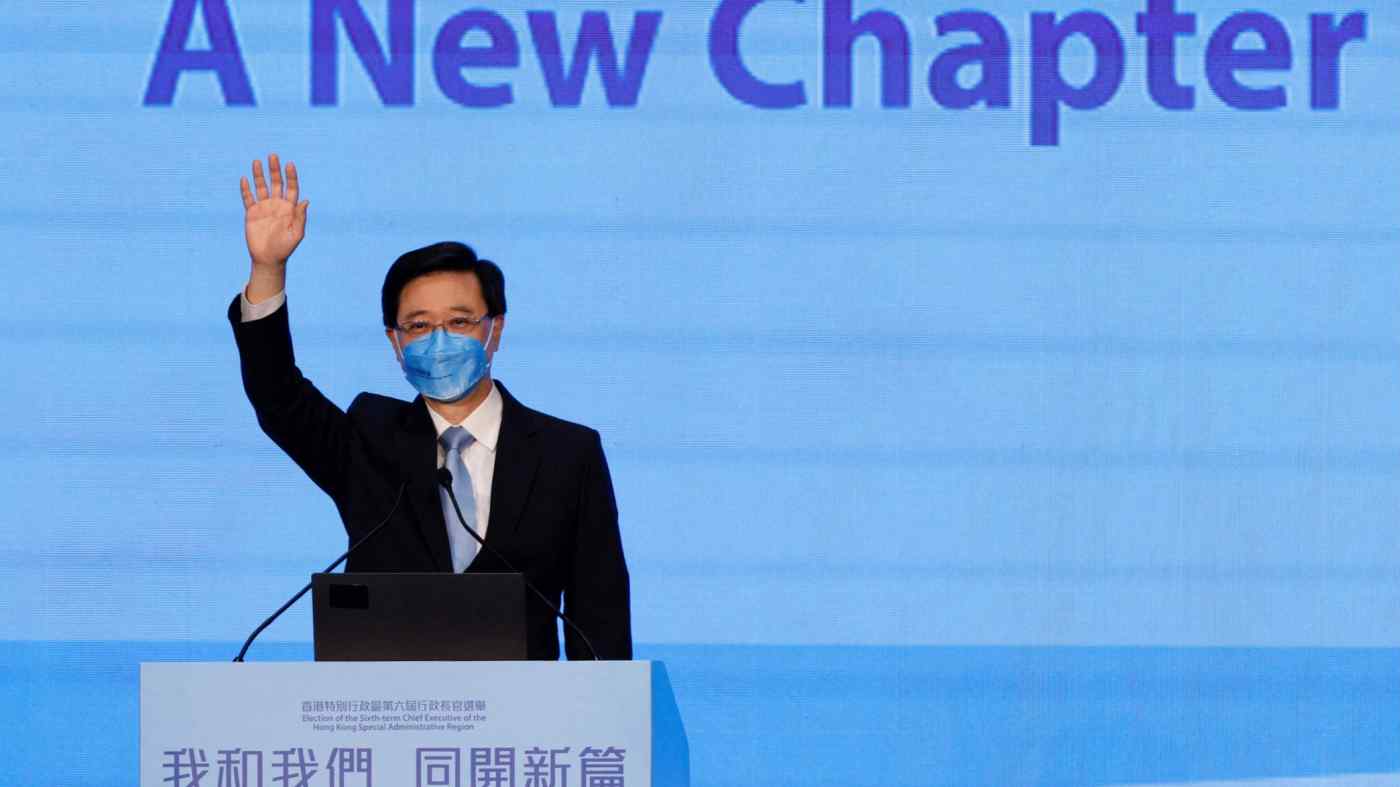 HONG KONG -- John Lee's expected appointment Sunday as Hong Kong's next leader sets up the former security chief to inherit an international business hub eager to emerge from pandemic isolation -- demands that must be balanced against Beijing's own COVID-zero strategy.

The 64-year-old Lee has vowed to strengthen Hong Kong's global role and competitiveness, but he has yet to lay out a blueprint for reopening the border with mainland China, or the rest of the world, after he takes office on July 1.

A clear vision will be critical to restoring confidence and driving a strong recovery after strict virus measures to battle the city's worst outbreak dealt a major blow to local businesses and dented the wider economy, which contracted 4% in the first quarter.

Business sentiment has been hit hard and foreign chambers of commerce have warned about the city's waning competitiveness thanks in large part to strict travel restrictions, including a mandatory hotel quarantine for visitors and now-lifted flight bans from nine countries.

While the city has reduced what was at one point a 21-day quarantine and is now reopening venues and welcoming back visitors, Hong Kong remains largely cut off as the rest of the world pivots toward living with the virus.

In his policy plan, Lee pledged to reinforce Hong Kong's status as a global finance and business center, and gateway to mainland China. But the former cop was scant on details.

"He vows to boost Hong Kong's economy, further internationalize the Hong Kong dollar, and strengthen its role as a global offshore renminbi center, but has said little about how he plans to advance these aims," Eurasia Group said in a report this week. "Together with Lee's security focus, this dynamic suggests the government will struggle to revitalize the economy and Hong Kong's decline as a global business hub will continue and potentially accelerate."

During a televised forum with journalists, Lee indicated that reopening the border with the mainland remained a priority, signaling his alignment with Beijing rather than the international community.

"I think with a pragmatic approach, it's possible," he said. "We have to understand that imported cases lead to local spread and this has happened in the fifth wave."

But the border with China remains closed even despite last year's long spell of no confirmed local coronavirus cases, which was a prerequisite for Beijing agreeing to a reopening.

Incumbent city leader Carrie Lam has been relaxing social distancing rules and easing travel restrictions as daily cases fall, a move seen by observers as a way to decouple from China's strict zero-virus policies which aim to quash outbreaks with lockdowns and mass testing.

Lam's moves don't go far enough for some critics in the business community who are calling for the removal of all border restrictions, which they say have disrupted commerce and business travel.

But any immediate moves in that direction are unlikely as mainland China battles an omicron-fueled outbreak, its worst since the virus was first detected in the city of Wuhan more than two years ago. The run-up has seen dozens of cities thrown into full or partial lockdown, including finance hub Shanghai.

Instead, Lee pointed last week to a strategy that would allow low-risk sectors to continue operating free of restrictions, without elaborating on which sectors and how such a policy would be implemented.

On Thursday, China doubled down on its zero-COVID policy and declared that "persistence is victory," making quick change in Hong Kong even less likely under Lee, whose own appointment and future hinges on an unwavering loyalty to Beijing.

A China-controlled election committee of nearly 1,500 Beijing loyalists will on Sunday pick Hong Kong's new chief executive, with Lee being the only name on the ballot. Potential candidates are vetted by Beijing and the city's residents have no say in the matter.

Lee has been described by analysts as a man who can execute policies without fail and shows unwavering loyalty, qualities that won Beijing's confidence.

When he was Hong Kong's security chief in 2019, Lee played an instrumental role in cracking down on monthslong pro-democracy protests and later, as the city's second-in-command, curtailed civil liberties and political freedoms under a Beijing-imposed national security law, which triggered U.S. sanctions against Lee and 11 other city officials.

Apart from COVID, national security will be a top priority when Lee takes up Hong Kong's top job.

The father of two has already vowed to implement a local version of the security legislation as well as a "fake news" law, which critics say will further erode freedoms in a city once-known for its freewheeling press.

For Beijing "it is better for a former disciplinary police officer to assume or take over the chief executive position in order to have a better grasp of all these national security issues," said political commentator Sonny Lo.

Lee's policy plan talks about alleviating housing shortages and it outlined plans to restructure the government and improve its emergency response. Constitutional reform and universal suffrage, core priorities in previous chief executive elections, were not mentioned in Lee's manifesto, and he has confirmed they're not a priority.

"(Beijing) would directly come up with solutions, and also policy choices for the government of Hong Kong. The Chief Executive and other secretaries, they will have to come up with the execution," Choy said, adding that fraught tensions between China and the West could make Lee's job even tougher.

"When the international environment has become more and more polarized, it would make these kinds of roles as a middleman more difficult."