Amid protests and coronavirus outbreak, activists hope to affect 2022 elections 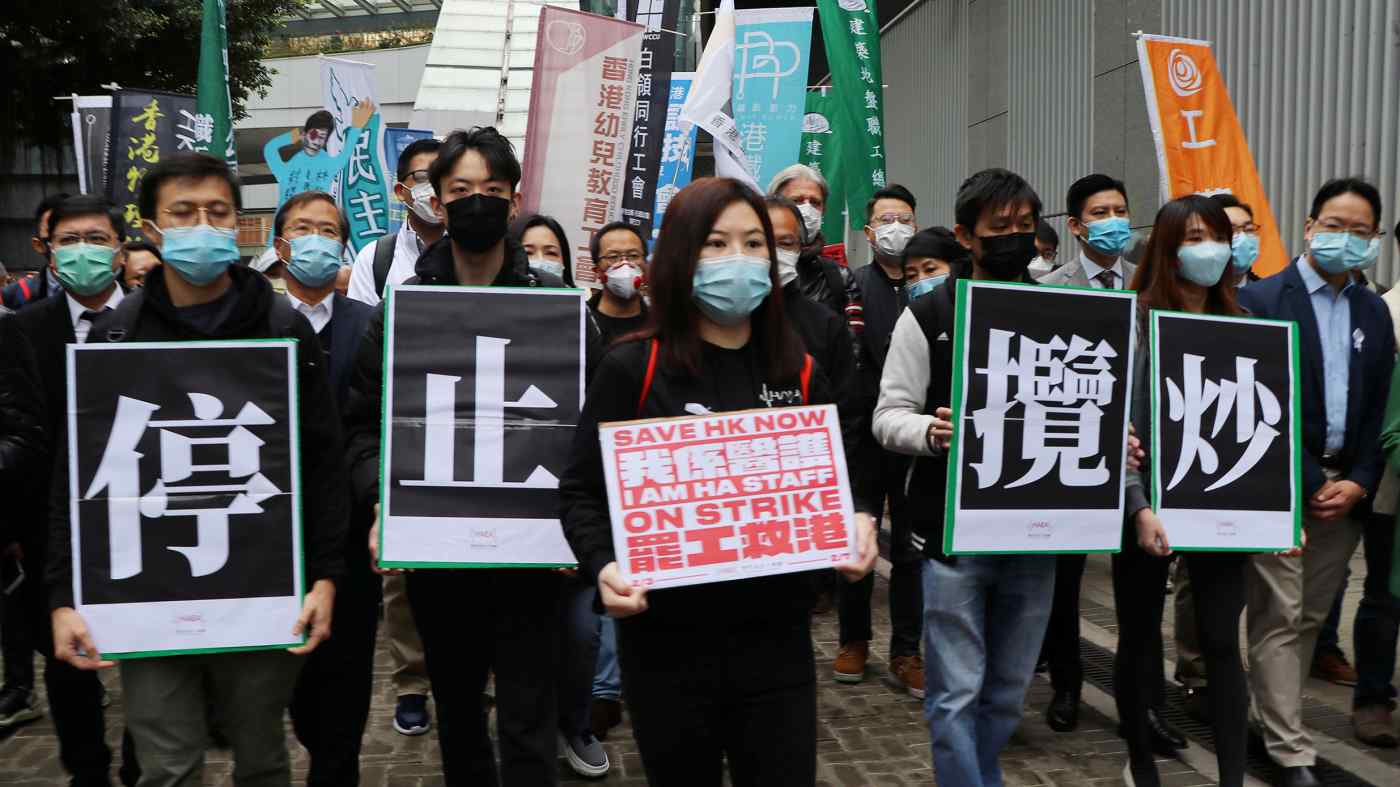 HONG KONG -- While protests in Hong Kong have quieted as the coronavirus pandemic disrupts public life, some pro-democracy activists have set up new trade unions with the hope of reshaping the city's political landscape.

Law said the idea to form the organization emerged after activists last year called on demonstrators to form unions, with the hope of forcing the government to respond to protesters' demands by initiating strikes that gripped the city.

Most health care professionals were not optimistic about organizing a strike in the industry due to their moral obligations to care for patients, but in early February the alliance responded to the call in another context.

At the onset of the coronavirus outbreak, the HAEA initiated an unprecedented strike that urged the government to shut the city's border with mainland China. More than 8,000 doctors and nurses joined the move, which affected emergency services at public hospitals. Law and his team said the strike was needed to prevent the coronavirus from spreading and protect medical staff on the front lines. The strike ended five days later after the government announced the closure of some border points and required all visitors from the mainland to undergo quarantine.

"The Hospital Authority and the government were not directly answering to the union," Law said. "But looking from the result, some demands have been met after our strike."

He believes the action taken could also serve as an example of how other industries could organize strikes in an effort to fight for their demands. "The government will not take on any more opinions from the pro-democratic side," he said. "You have to take further actions to force them to think twice."

The HAEA's application to form a union was one of 1,713 submitted to the government from the time the protests began last June until this past March; that was more than 100 times the number of applications in the same period a year earlier. The Labor Department says that 101 trade unions had been registered during the more recent period, with more than 1,600 applications still being processed.

Ivan Choy Chi-keung, senior lecturer of government and public administration at the Chinese University of Hong Kong, says the vast amount of new unions underscores the strong increase in political awareness among Hong Kong citizens in the wake of the protests.

"This reflects that young people may not trust the traditional political parties now," he said. "They may set up their own trade unions and push forward the social movement by different means."

Choy said that compared with traditional unions, the new unions do not focus only on labor rights: They are political in nature and more insistent on the ideology of freedom and democracy. "They will initiate related movements and motivate more people to take action. This is the biggest impact on the social movement," he said. Chris Ng King-cheung, a maintenance technician who works for the city's rail company, MTR, co-founded the Railway Power union with the hope of changing public perception of the company. (Photo by Takeshi Kihara)

MTR was accused by some protesters of aiding police by closing stations during pro-democracy marches, after several Chinese state-run media outlets criticized the company for "facilitating protesters' actions." Its railway facilities have since become vandalism targets.

But MTR chairman Rex Auyeung Pak-kuen denied bowing to pressure from Beijing, and has told local media that all company decisions are based on the safety of passengers, staff members and the railway service. He emphasized that MTR does not act politically and only aims to provide public transport.

Ng co-founded the union in November with the hope of changing public perception of the railway operator, which soured during the protests. It has about 800 members, or 5% of the company's employees in Hong Kong. "We don't agree with protesters' acts of violence, but we understand why they did it," he said.

The union has actively lobbied MTR management to release security footage surrounding several high-profile incidents that took place at its stations last year, including a mob attack at one station and a police raid at another. Many protesters have accused MTR of not taking responsibility for the violence. An anti-government protester vandalizes an MTR train during a demonstration in Hong Kong in November 2019. Activists accused the rail operator of aiding police by closing stations during pro-democracy rallies.   © Reuters

"We have talked to the company several times already," Ng said. "If they want this violence to stop, they have to stop it from where it begins. You can't just keep on blaming [the protesters], but you have to understand why they are so furious."

The emergence of new unions not only influences civil discourse, but it also has the potential of affecting the 2022 election for Hong Kong's chief executive.

Under Hong Kong's electoral system, registered unions can vote for 60 members who represent the labor sector in the 1,200-member election committee, which will nominate and vote for the city's top political leader. During the last election in 2017, the 60 seats were dominated by the pro-Beijing camp, which controlled most of the registered unions at that time.

Following the strong showing of pro-democracy candidates in District Council elections last November, the pro-democracy camp is eyeing to control more seats in the election committee and have a greater say.

But regulations require that the new unions must have operated for 12 months before they can register to be voters. That means these newly registered unions will have to be approved by May 2 -- a year before the voter registration deadline in 2021 -- in order to be eligible for voting.

Secretary for Labor and Welfare Law Chi-kwong has said the new applications have come like a "tsunami" and overwhelmed the government's resources, which normally process 10 to 30 applications a year. Even though the department has increased manpower by 12 times to process the applications, Law expects only about 40 additional applications to be completed by the end of April. 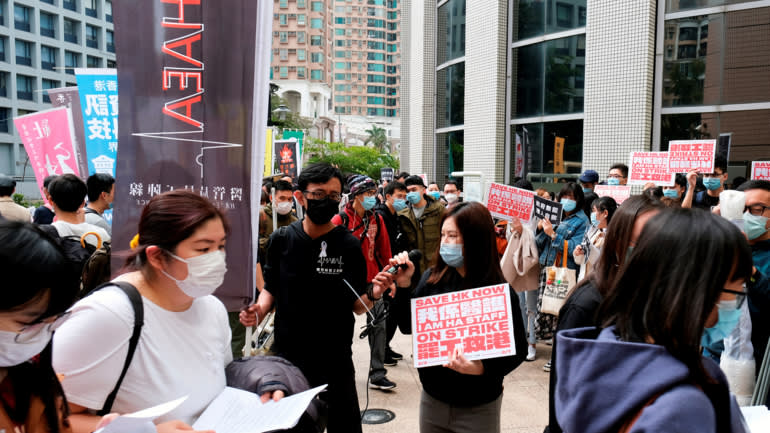 Members of the Hospital Authority Employees Alliance gather in early February to strike, demanding that Hong Kong close its border with mainland China to reduce the spread of the new coronavirus.   © Reuters

Benny Tai Yiu-ting, associate professor of law at the University of Hong Kong, said getting the 60 seats from the labor sector could be crucial in allowing the pro-democracy camp to win a majority to influence the next election for the city's next leader.

Tai said the chances of pro-democracy groups winning those 60 seats will be difficult if only a small number of outstanding applications can be processed in time. Still, he said the trend toward more unions will let Chinese Communist Party leaders know that the current mechanism cannot guarantee their ability to control the election.

For the impact on the upcoming election, Choy noted that it is not only the pan-democrats who have been setting up unions -- the pro-government camp has been doing the same. "We cannot assume that all applications are from the pro-democracy side," he said.

But that has not stopped some pro-democracy activists from launching a website for those interested in setting up unions and to connect with potential members. Hong Kong requires that a union must include at least seven people from the same industry.

A representative of the website, developed by HK Petitions Team in February, says it estimates that about 200 unions will have to be set up on the platform before it can hope to have an impact on the election. As of April 9, there were 3,900 users on the platform. Around 200 groups submitted applications to the authority, but no union has been approved so far. 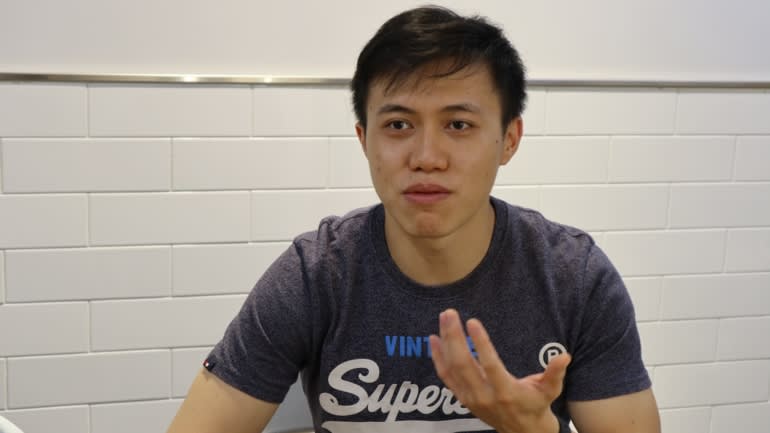 Ivan Law Cheuk-yiu, co-founder of the Hospital Authority Employees Alliance, says that while he is not optimistic there will be any change to Hong Kong's political system, he is determined to fight. (Photo by Takeshi Kihara)

Law, of the HAEA, said that while he is not optimistic there will be any change to Hong Kong's political system, he is determined to fight. "To defend our rights, we cannot use the old ways. We have to take it further and do whatever we need," he said, adding that the medical strike was a good example.

For its next step, the union will look into the problems in the health care industry. It is also connecting with other unions, hoping to create a vision for Hong Kong's future and working toward a common goal.

Echoing that sentiment, Ng said the MTR union is now talking with bus and airline unions to form a stronger force in the transportation sector.

"If we can have more people to think about how to deal with the common problems, this will make us all stronger," he said. "In this way, it will be easier to let the whole society know what is happening in those companies. The best weapons of the unions are pressure from society and voices from the citizens."