HONG KONG -- As the clock ticks toward the implementation of Beijing's new national security laws for Hong Kong, people in the territory are rushing to alter their digital footprints or remove their presence entirely from social media.

Even before the expected passage of the legislation on Tuesday, it is already triggering wide self-censorship among Hong Kong people.

On Monday, a Twitter user named "Winnie" deactivated an account with the hashtag #hkprotest. "I'm not doing it because I feel I am at risk, it is out of an abundance of caution," the tweet said, adding that "my heart goes out to the visible activists."

Jimmy Lai Chee-ying, founder of the pro-democracy Apple Daily newspaper, wrote in his verified Twitter account on Monday that Wang Dan, a former Tiananmen student leader now living in exile in the U.S., had warned him and prominent activist Joshua Wong Chi-fung that they would be the first two targets after the security laws are enacted. "But I will not leave #HK," Lai wrote. Pro-democracy activist Joshua Wong poses with a supporter on June 19 after announcing his plans to run for the Hong Kong legislature.   © Reuters

"The precise scope and content of the proposed offenses are still unclear," Johannes Chan, law professor at the University of Hong Kong, told the Nikkei Asian Review in an email. Despite assurances from officials in Beijing and Hong Kong that the law will only affect a small minority of people, the question of who determines that minority remains unanswered.

"Once you fall within the minority, none of the human-rights guarantees in the Basic Law or the common law system will apply," Chan said, referring to Hong Kong's mini-constitution that is part of the "one country, two systems" framework. "It is clear that the law will have a severe impact on freedom of expression, if not personal security, on the people of Hong Kong," he said.

"The national security law is already exerting its impact even before it is enacted," he said. While some companies in Hong Kong have expressed their support for the new laws, "many people have begun to delete their postings on Facebook."

A high school teacher in his late 20s, who requested anonymity, explained to Nikkei why he recently changed his name on Facebook: "We are now so afraid that we could be sold out by our so-called friends online."

He has also changed his profile photo on social media, deleted politically sensitive posts, and has gone through his online "friends" list to check whether anyone could possibly target him for his liberal views on political and social issues. He screened his online contacts by reading through their recent postings of their political views.

"Some people use these contents as weapons to make complaints about me," he said. "This is a way to protect ourselves and also to prevent all sorts of attacks and harassment coming from online."

The teacher's colleague, who also requested anonymity, is taking a similar approach. The colleague, who is in his early 30s, changed the online name that he had used for seven years after learning that others had done so out of security concerns. Not only has the colleague dropped his familiar cyberspace identity and erased past postings that could be deemed politically sensitive, he has stopped writing comments on news and social events published on Facebook and Instagram. He now simply reposts content that he finds online without making additional remarks.

"There are so many pro-Beijing netizens that have been active in harassing and reporting other netizens with pro-democratic political views," the colleague said. Being teachers in Hong Kong with liberal and democratic views make them vulnerable to possible attacks from authorities and they could face losing their jobs, as had already happened to some of their peers.

Both men said "fear" was looming over them, as the enactment of the national security laws is imminent. Although articles and provisions of the laws have not yet been made public, comments from prominent pro-Beijing figures in Hong Kong and a "summary" from China's official Xinhua News Agency are causing jitters among many people in Hong Kong.

The eradication and alteration of digital footprints were first seen June last year, when a series of protests erupted against a now-withdrawn extradition bill. Such moves have accelerated since the emergence of the far-reaching national security laws.

"This law has further impact not only for journalists, but also for people of Hong Kong in general," Clement Y.K. So, professor of journalism at the Chinese University of Hong Kong, told Nikkei. "People are starting to really worry, and they are starting to delete things they said online in the past," he said.

Some of So's friends have also changed their names, deleted content from cyberspace and closed down WhatsApp chat groups in advance of the new laws. "They don't want to be identified. This is the direct reaction to the enactment of the law," he said.

When Cathay Pacific Airways, Hong Kong's largest airline, launched an internal online platform in April for employees to report on and file complaints about colleagues, many of the carrier's staff decided to delete their social media accounts. 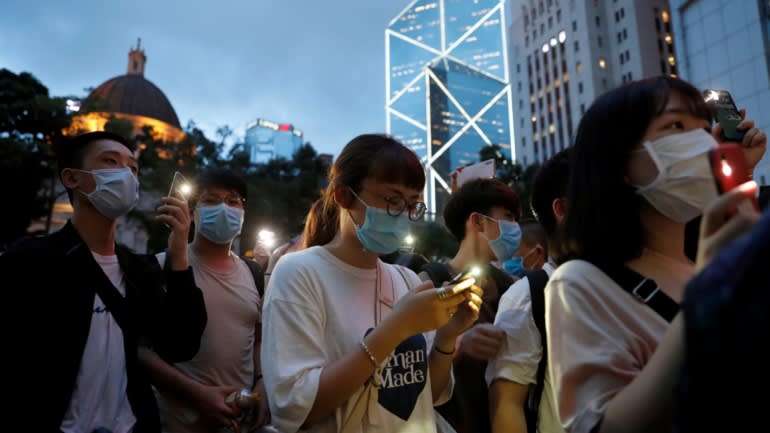 Pro-democracy demonstrators in Hong Kong march holding their phones during a protest June 9 to mark the first anniversary of a mass rally against the now-withdrawn extradition bill.   © Reuters

"You never know which colleagues will report on you," said one flight attendant. "We don't talk about politics anymore," she said, adding that the sense of distrust among co-workers is "unprecedented."

About 40 employees have been dismissed over their pro-protest social-media posts since the unrest broke out in Hong Kong last year, according to Cathay's labor union. Its former chief executive, Rupert Hogg, resigned last August amid criticism from mainland Chinese regulators that he was taking a lenient stance toward employees' involvement in the protests.

With the impending national security laws, the flight attendant said that people working in other business sectors in Hong Kong "will face the same kind of pressures" she faces now. "There are so many Chinese companies operating here, and China is a major market for many businesses," she said. "How many companies can afford to lose that market?"

But those cleansing their digital records are doing so with much anxiety.

"I did nothing wrong," the teacher in his 20s said. "What I did was just talking, sharing, or expressing my views on social and political events, which is not against the law and not harmful to anyone in society." He admits he was one of the more stubborn ones to keep his original online identity during the protests, and it was only after his friends' repeated exhortations on security concerns that eventually persuaded him to change his web profile. A riot police officer stands guard to prevent mass gatherings during a protest against the looming national security legislation in Hong Kong on June 28.   © Reuters

It is a similar story for his colleague. "It was my usual practice to share my views on particular news. I didn't care, because Hong Kong is a place where you can say whatever you want." But now, he said, that seems to be part of the past. "We used to live in a free world, free from fear... Now, I am literally living in fear."

Even though the two teachers do not intend to leave Hong Kong for now, it remains an option. The teacher in his 20s said that he spoke with his father and his younger brother after the initial announcement of the national security bill, and decided to remain in Hong Kong, even though the family has the financial means to depart.

"Leaving is a sign of surrender," he said, adding that it would be giving in to the government's intention of pushing pro-democracy residents and dissidents abroad. "I want to keep on fighting and resisting."

His colleague, who said he was not financially able to leave Hong Kong, will still prepare to depart when the "first-ever unimportant Hong Konger with no influence" is arrested for violating the laws. Until that time, he vows to stay defiant.

It is too "suffocating" for him to be fully submissive, and he refuses to be "another animal living in the Animal Farm," drawing a parallel to George Orwell's classic novel in which the ruling pigs gradually turn an animal community into an authoritarian world.

"I know it's dwindling, but I'll just do as much as I can," the colleague said.

"To stay defiant is the best and the only way to deal with authoritarian regime," he said. "If you lose the spirit, there will be no hope."