Journalists, pollsters and politicians seek clearer answers on what is forbidden HONG KONG -- Leticia Wong Man-huen, a district councilor in Hong Kong, had planned a small celebration with 50 supporters and staff to mark the completion of renovations of her office with the waning of the coronavirus pandemic.

But just before it was to start last Saturday, about a dozen police officers appeared in front of the office in northeastern Hong Kong. They demanded Wong take down a banner on the wall that bore the message, "Liberate Hong Kong. Revolution of our times."

One officer warned that she could be charged and prosecuted under the city's new national security law if she did not remove the banner.

Even though the law, passed in Beijing and imposed shortly before midnight on June 30, stipulates protections for freedoms of speech, press, assembly, procession and demonstration, Wong is not alone in encountering obstacles in expressing herself as freely as she used to.

Within 24 hours of the enactment of the law, police had arrested 10 people for violating the law, some simply for chanting the slogan on Wong's wall.

Tong Ying-kit, a 23-year-old who was riding a motorcycle with the controversial slogan, has been charged with terrorism and inciting secession and is set to stay in jail until at least October after being denied bail, under the restrictions of the new law. 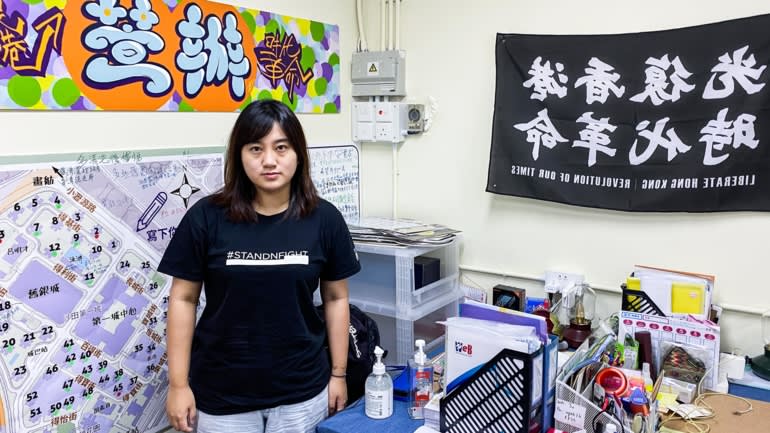 Police have asked District Councilor Leticia Wong to remove the banner, right, that carries a mirror image of the protest slogan, "Liberate Hong Kong. Revolution of our times." (Photo by Kenji Kawase)

Local journalists are troubled by the ambiguity and broad scope of the new law, which lawyers say reflects the nature of China's legal system rather than the common law approach used in Hong Kong.

"In the past week, reporters have asked me about whether it was OK to interview Lord [Chris] Patten, or to do investigative reporting on alleged malpractice or unlawful behavior of senior police officers," Chris Yeung Kin-hing, chairman of the Hong Kong Journalists Association, told reporters at a press briefing on Tuesday, referring to the Oxford University chancellor who served as Hong Kong's last colonial governor.

"I honestly do not have the answer," Yeung said. "You're OK, until you are not OK."

Pollsters faced similar dilemmas. A large public relations agency which conducts surveys on behalf of clients has suspended this service while awaiting more clarity on how the security law will be implemented.

Robert Chung Ting-yiu, president of Hong Kong Public Opinion Research Institute, however, said he would continue to conduct surveys on topics even as sensitive as views on Hong Kong independence, if commissioned.

"Up to this moment, no lawyer or legal expert has advised us otherwise, so we consider it permissible," he said. "I cannot say whether and when the sense of white terror will grow to such an extent that we would not be able to collect genuine public opinion. I hope that day will never come."

Some believe the authorities intend to keep residents guessing as to what is allowed or not. Keith Richburg, a former reporter who now runs the journalism program at the University of Hong Kong, said at a forum on Tuesday that officials are "never going to spell out where the red lines are" to retain flexibility on enforcement.

This leaves many unsure of their way ahead.

"There really is no legal advice a Hong Kong lawyer could give you," Antony Dapiran, a Hong Kong-based lawyer and writer, said at the same forum when asked about news reporting under the law. He noted that officials have given mixed signals about whether those who merely express ideas without taking action will be prosecuted.

U.S. Consul General Hanscom Smith said this environment will come at a cost to Hong Kong.

"Ultimately, this is not conducive to the success of Hong Kong's model," he said during a radio interview on Monday. "Hong Kong has been a successful economy precisely because of its openness and transparency."

Chief Executive Carrie Lam continues to dismiss worries about the law, suggesting that the stock market's rise since the implementation of the new rules reflects investors' relief and confidence in resolving the social conflicts of the past year.

Asked Tuesday whether she could guarantee that journalists would be allowed to report on controversial topics, she said that if "all reporters in Hong Kong can give me a 100% guarantee that they will not commit any offences under this piece of national legislation, then I can do the same."

Meanwhile, Wong, the opposition district councilor, continues to fly the contested banner despite police demands to remove it.

"They left when I asked them to either leave or arrest me," she said.