TOKYO -- Japan is poised to supply to the U.S. a key component used in an advanced missile system, the first concrete result of a landmark decision to ease a self-imposed, postwar ban on arms exports.

According to a Nikkei report confirmed by Japanese Defense Ministry officials, Mitsubishi Heavy Industries will provide U.S. missile maker Raytheon with a sophisticated sensor for its Patriot ground-to-air missile. The sensor allows the Patriot to precisely determine its attitude and position, helping it hit its target.

"We will decide whether to allow (the exports) based on the new principles regarding the transfer of defense equipment," Defense Minister Itsunori Onodera said April 18.

Under a licensing agreement with Raytheon, Mitsubishi Heavy Industries, Japan's largest defense contractor, makes sensors for use in the domestic version of the Patriot Advanced Capability-2 interceptor (PAC-2) used by Japan's Self-Defense Forces. The U.S. company has asked Mitsubishi Heavy to supply the sensor for use in U.S. equipment.

The move comes as Prime Minister Shinzo Abe seeks to cast off Japan's postwar military inhibitions and promote defense cooperation with allies as part of a policy he calls "active pacifism." On April 1, his cabinet relaxed a decades-old embargo on arms exports.

For nearly a half century, Japan has severely restricted arms exports. Abe's government has replaced the ban with a new set of guidelines that allow exports provided they meet certain criteria, including contributing to international peace and serving Japan's security interests. The change came shortly before the leaders of two of Japan's allies, Australia and the U.S., visited Tokyo. The Abe government began a serious push to ease the weapons embargo six months ago, following an expert panel's recommendation in October.

"We need to review the three principles (on arms exports) because cooperation in military equipment must be part of Japan's proactive peace strategies," Abe said following the October panel report.

The old rules hamstrung Japan in the area of international security cooperation. Tokyo could send Self-Defense Force personnel for noncombat operations, but little else. Having the option to jointly develop and export military gear gives it "a new card to play in our efforts to strengthen cooperation with friendly countries," according to a Foreign Ministry official.

The policy shift has drawn support from Japan's most important ally, the U.S. Under the previous principles, only prototypes were exempt from the ban. This looked like a roadblock for a Japan-U.S. project to develop the SM-3 Block 2A, a next-generation missile interceptor for warships equipped with the Aegis radar system. Since last fall, U.S. Defense Department officials have been pressing Japan to commit to exporting the rocket motor and the nosecone, said a senior Japanese Defense Ministry official.

The new rules pave the way for shipments of both prototypes and mass-produced items.

Casting an eye on China's military buildup, Japan is keen to expand its defense cooperation beyond the U.S. to other countries. After Tokyo announced it would relax its export restrictions, overseas defense officials and contractors have been quietly contacting their Japanese counterparts.

"Japan and Australia are both surrounded by the sea, so we share the notion that maritime security is vital," Abe told Australian Prime Minister Tony Abbott at an April 7 reception in Tokyo. Earlier, the two leaders signed an agreement that includes joint research on fluid mechanics.

The mundane-sounding language is meant to avoid raising hackles in the region. Basically, it means the two countries will work together to develop technology that allows vessels to glide through water more quickly and easily. In practice, it means giving Canberra access to Japanese technology that makes submarines quieter and lets them stay underwater longer.

Ahead of Abbott's trip, Warren King, head of the Australian government's Defence Materiel Organization, met with Japanese Defense Ministry officials. After briefing the officials on Australia's plans to deploy submarines and wheeled armored personnel carriers, King asked for a first-hand look at Japan's defense industry. His hosts obliged with a tour of submarines and escort ships, as well as visits to Mitsubishi Electric, NEC and other defense contractors.

The previous restrictions on arms exports -- part of Japan's postwar commitment to pacifism -- effectively banned weapons exports, with rare exceptions. The new principles give policymakers more leeway. "Compared to the old way, which required the chief cabinet secretary to announce every exception, we now have greater flexibility," an aide to Abe said.

Already, Japan is in talks to sell the Maritime Self-Defense Force's US-2 amphibian rescue aircraft to India

In addition, the Defense Ministry on April 9 hosted the first division-chief-level consultation with France on joint development of military equipment.

The following day, executives from 15 defense equipment makers from the two countries gathered at the Ministry of Economy, Trade and Industry in Tokyo. The list included big guns such as Kawasaki Heavy Industries, Airbus Group and Mitsubishi Heavy Industries.

A Mitsubishi Electric plant in Kamakura, Kanagawa Prefecture, is one popular stop for visitors. The British Ministry of Defense has shown particularly strong interest in partnering with Mitsubishi Electric on its Meteor air-to-air missile. The Kamakura plant is also involved in producing a successor to the Sea Sparrow anti-aircraft missile for ships. The U.S. Department of Defense and its research arm, the Defense Advanced Research Projects Agency, are keen to get access to its technology. 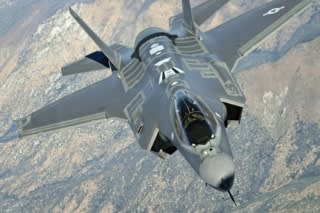 The U.S. F-35 stealth fighter is among the weapons Japan hopes to play a bigger role in developing, now that it has relaxed restrictions on arms exports.

All this opens up opportunities for Japanese defense contractors, heretofore confined to the relatively small domestic market, worth around 1.6 trillion yen ($15.6 billion) a year. Even Mitsubishi Heavy only manages defense-related sales of about 300 billion yen, a tenth of what giants such as Boeing and Lockheed Martin ring up.

What will the neighbors think?

Abe is hoping the new policy will help Japan cement defense ties with the U.S., Europe and friendly Asian nations. But the payoff is unclear and Japan is in uncharted strategic territory.

Tokyo had planned to provide Vietnam with patrol ships, but a Japanese government official recently said the Southeast Asian country is "worried about its relations with China." So Japan is moving cautiously. When Vietnamese President Truong Tan Sang visited Tokyo on March 18, Abe told him he wanted to send a fact-finding mission first. Even if Japan does decide to provide Hanoi with vessels, it may be more than a year before they are delivered.

Others in the region fret that Japan's move to ease its arms export rules signals a shift away from the pacifism it has maintained since the end of World War II. "We will closely monitor developments to find out what the Abe government's real intentions are," said an Asian diplomat in Tokyo who declined to be identified.

The prime minister is mindful of such concerns. "Some people would object to a sharp increase in exports (of military equipment), and such increases could create a negative impression of Japan," Abe is quoted as telling one eager defense company executive.

As Japan wades into the weapons market, a key challenge will be to ensure that its hardware does not find its way into the wrong hands. A Defense Ministry official conceded that when it comes to pinpointing other nations' defense needs and keeping a tight grip on exports to problem countries, Japan is "one lap behind" the U.S. and Europe.