The reception desk of the Hoshinoya Tokyo in the Otemachi district of Tokyo: The discussed reforms will abolish requirements for guests to fill out registration forms.
RIEKO MIKI, Nikkei staff writerOctober 9, 2020 07:00 JST | Japan
CopyCopied

TOKYO -- The Japanese government is breaking down its wide-ranging initiative for regulatory reform into a four-step action plan, starting with scrapping the use of hanko stamps and ending with setting up online payment options for taxes and national insurance, Nikkei has learned.

Prime Minister Yoshihide Suga considers these reforms the core goal for his tenure. He wants to cut back on the regulations that have prevented the government from going digital in an effort to bolster Japan's productivity and economic activity.

The Council for Promotion of Regulatory Reform will soon start discussions of the four-step plan. The first step of abolishing requirements for hanko stamps, which are used in Japan in lieu of signatures, is already underway across all national agencies. The government is on track to stop requiring the stamps in more than 90% of administrative processes, such as filing for tax exemptions for dependents.

The next focus will be scrapping requirements for paper and in-person filings. Property deals could be signed online if Japan's real estate agencies no longer have to provide physical disclosure statements to their clients.

Hotels would be able to eliminate manned reception desks if guests are allowed to register online. Currently, guests are required by law to write their names, addresses, occupations and other information on hotel registers. 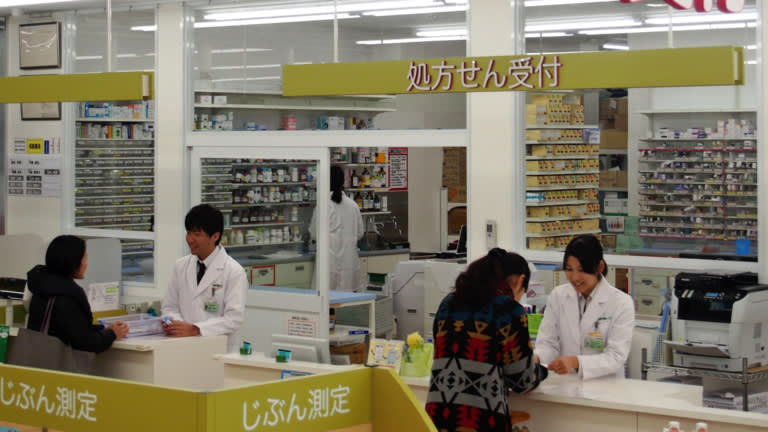 Drugstores in Japan are required to have pharmacists on-site to explain prescription drugs to customers buying them. (Photo courtesy of Sugi Holdings)

The government also wants to tackle residency requirements at certain jobs. For example, a company with 1,000 or more employees must have a dedicated doctor on-site at all times. If these doctors no longer need to be available in person, companies can switch to telemedicine options.

Overall, the proposed changes span a wide range of policy fields. Some of them also require multiple legal amendments. The government plans to submit the necessary legislation as a bundle to the regular parliamentary session next year to speed up deliberations. Those that are not ready at that point will be submitted at a later time.

Japan is falling behind other developed economies in adopting digital government processes. The country ranked 14th in the United Nations E-Government Survey this year, down four places from the previous survey in 2018.

But the push for change could cause friction with industry groups. The Japan Medical Association is reluctant for telemedicine, which was temporarily greenlighted in April due to the coronavirus, to immediately become a permanent option. Pharmacists and drugstores are at odds over a proposal that would no longer require pharmacists to instruct patients about their prescriptions at pickup.

The government will seek cooperation from the ruling Liberal Democratic Party, which has strong ties to various industry groups. These lobbies have traditionally urged the LDP to maintain regulations, forcing the party to navigate a delicate balance between the two sides.