Many conservatives who opposed migrant labor now need it

Some foreign workers, like these at a farm in Showa, Gunma Prefecture, have already made their way to Japan through trainee programs.   © Reuters
SHUNSUKE SHIGETA, Nikkei staff writerJune 25, 2018 13:56 JST | Japan
CopyCopied

TOKYO -- Come April some Japanese employers will be able to hire unskilled foreign workers, thanks to a recent policy shift by Prime Minister Shinzo Abe's government.

Japan is creating a new class of work permits valid for up to five years in the construction, nursing care and three other sectors.

The program, designed to alleviate an acute labor shortage, marks a 180-degree turn for a government that has long stood against accepting unskilled foreign workers.

The prime minister declared he would go ahead with the program on June 5 during a meeting of the Council on Economic and Fiscal Policy.

Sadayuki Sakakibara, former chairman of the Japan Business Federation, a big lobby for Japanese business interests, and a panel member, welcomed the announcement. "The business community welcomes and appreciates" the decision, he said. India plans to send youth to be trained in Japan

Abe told the panel a story about the president of Vietnam visiting Japan. Abe said Tran Dai Quang came away surprised after talking with Vietnamese working in Gunma Prefecture, northwest of Tokyo. The laborers told their president they were earning as much as Japanese workers.

Abe has advocated for regulatory reform since becoming prime minister, though his policies have fallen short of his rhetoric. Much of his once-ballyhooed "Abenomics" package misfired. Only the Bank of Japan has held up its part, flooding the country's financial system with yen.

Abenomics also called for grand government spending programs and policy reforms. One reform Abe has hesitated on is ending restrictions on unskilled foreign workers, saying the country is not ready for an immigration policy.

This belief reflects the views of Japanese conservatives, Abe's support base, many of whom oppose increasing the number of non-Japanese laborers due to job security and public safety fears. 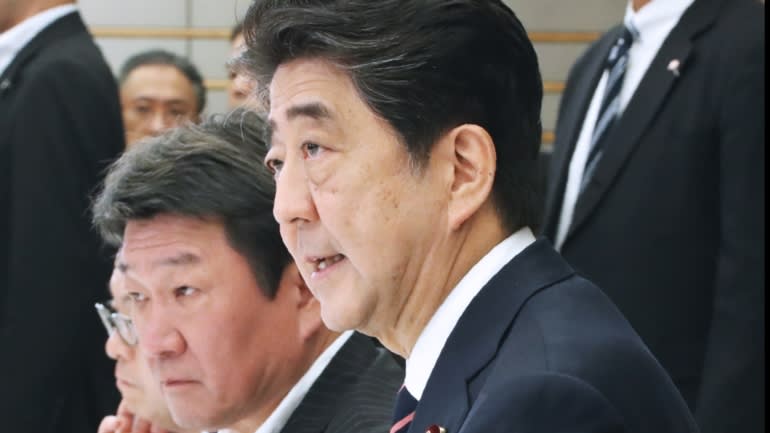 Prime Minister Shinzo Abe speaks at a meeting of the Council on Economic and Fiscal Policy on June 5.

But a shortage of workers willing to take on humdrum tasks has forced Abe's hand.

The government has already been helping the private sector with its labor problems via the Technical Intern Training Program, which allows certain industries to hire foreign workers as "interns." Japan is also letting foreign students work part time.

It was last autumn when the Abe administration began to look at how it might do more. At the time, Chief Cabinet Secretary Yoshihide Suga, who oversees domestic political issues at the office of the prime minister, received pleas from newly built nursing homes that could not open because they could not find caregivers.

Some 20% of the nursing homes that opened at the time did not have enough caregivers, according to a survey that Suga ordered. The survey found that as a result these homes had to cut back on the services they offered and that many people in need of care were unable to move into homes.

The Ministry of Health, Labor and Welfare reported to Suga that the care sector alone is expected to face a shortage of 550,000 workers at the end of fiscal 2025. A set of surveys has found that labor shortages in nursing care, construction, agriculture, lodging and shipbuilding will remain in the future.

People close to Abe began to recognize changes in the prime minister's stance early this year. In February, when senior officials of the Cabinet Secretariat and other bureaucrats chatted with Abe about issues related to the advisory council, the prime minister murmured that accepting unskilled foreign labor is "unavoidable."

Those present at the meeting felt restrictions on unskilled foreign labor would surely be eased.

Deliberations kicked off regarding what conditions foreign workers would have to meet, such as having specific kinds of expertise and skills. A Cabinet Secretariat-led panel was established on Feb. 23 and was told to deliver its conclusions by June.

The ruling Liberal Democratic Party fell into step with the government, having fielded many requests from the Japan Foodservice Association, the Japan Ryokan and Hotel Association, and other industry organizations to open the country to more foreign workers. Students from Vietnam receive training in nursing care in Tokyo.

In the past, 70% of businesses outside big cities opposed accepting foreign workers, according to Keisuke Suzuki, an LDP lower house member who deals with foreign labor issues. Now companies in urban and rural areas want foreign workers because "labor shortages are so acute that corporate activities are becoming unsustainable," Suzuki said.

The prime minister's office has been informed of this turnaround.

The LDP gets a lot of support from the agriculture and construction sectors as well as from small and midsize business operators, all of whom are dipping into an ever-shallower labor pool.

Abe boasts that the ratio of job offers to seekers has topped 1 -- more than 100 job offers for 100 seekers -- in all prefectures as a result of Abenomics. But the situation means LDP-leaning businesses across the country are grappling with labor shortages.

The Abe administration thus concluded that even conservatives would support measures to refill the pool.

At a plenary meeting of the LDP's Policy Research Council on June 12, the government showed a set of measures, including "reinforcement of control on foreign residents in Japan," to ease concerns among conservative lawmakers that more foreign workers could lead to a deterioration of civil order.

Many of the meeting's participants made various requests, such as ensuring foreign workers know enough Japanese to carry on short daily conversations. The requests were being made from the perspective of accepting more foreign workers, not to put hurdles in front of them.

"It has become difficult to operate convenience stores without foreign workers," Suga told his aides, before concluding that such workers now have a choice of countries to work in. "And they are making that choice right now," he said.