Park Young-sun, left, of the ruling Democratic Party and Oh Se-hoon of the main opposition People Power Party, are running in an April 7 election to become mayor of Seoul. A string of candidates have expressed their disapproval over holding Seoul Pride in the city center. (Source photos by Yonhap/Kyodo, Yonhap/EPA/Jiji and Getty Images)
RAPHAEL RASHID, Contributing writerMarch 26, 2021 14:56 JST | South Korea
CopyCopied

SEOUL -- Staff Sergeant Byun Hee-soo was classified as "disabled" by the South Korean military and discharged from service last year after the transgender soldier had surgery to confirm her gender as a woman.

At a tearful news conference before her dismissal, Byun said: "I want to show everyone that I can also be one of the great soldiers who protect this country." A year later, she was found dead at her home.

Her death on March 3 came as a shock to the country's LGBTQ community, already reeling from the death of two other transgender people, Jeju Pride organizer Kim Ki-hong and writer Lee Eun-yong. The three died within days of each other.

Civic and liberal religious groups claim South Korea's atmosphere of intolerance and lack of a legal framework against discrimination were responsible for their deaths, calling them "social murders."

As the LGBTQ community mourned, their rights were being enthusiastically discussed among candidates vying to become the next mayor of Seoul. The April 7 election is considered to be a barometer for next year's presidential poll.

During a televised debate, Ahn Cheol-soo, head of the minor conservative opposition People's Party and a candidate until this week, asserted that Seoul should move its annual pride event away from the city center to protect children. Ahn said people should respect "the human rights of others."

Park Young-sun of the ruling Democratic Party, known for previously expressing her vehement opposition to homosexuality, recently said that while she was against discrimination, forming a social consensus on Seoul Pride was "more important."

Oh Se-hoon, the candidate of the main opposition People Power Party, was reportedly quoted through an official that his position "is that it is not desirable to hold the festival in Seoul Plaza where an array of people gather." 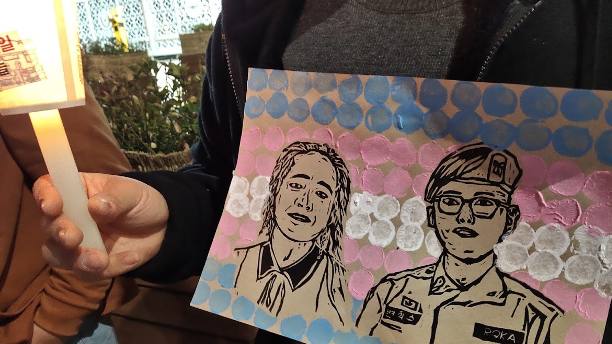 In succession, a string of other candidates expressed their disapproval upon being asked their stance on the festival being held in Seoul Plaza, in front of the mayor's office known as City Hall.

"The question is framed such that it cannot be answered, as if the festival was inappropriate," said Yang Sun-woo, chairperson of the Seoul Queer Culture Festival Organizing Committee, noting that use of Seoul Plaza is beyond the authority of the mayor.

Asia presents a mixed picture when it comes to LGBTQ rights. In Thailand, they are perceived to be accepted. In Taiwan, they are celebrated. In Japan, there are signs of progress -- a regional district court recently ruled that the government's failure to recognize same-sex marriage was unconstitutional.

But in South Korea, LGBTQ rights are political.

From parliamentary audits to confirmation hearings for incumbent ministers and constitutional court judges, the issue of LGBTQ rights, being "for or against" homosexuality, or even having to confirm one's heterosexuality, are constantly thrown at politicians and candidates for top government positions. A South Korea citizen is handed a candle at a memorial event for the late former Staff Sergeant Byun Hee-soo held in front of the country’s Ministry of National Defense on March 12 in Seoul. (Photo by Raphael Rashid).

Such questions, Yang tells Nikkei Asia, are not about the human rights or protection of the socially vulnerable, but rather a political ploy to win conservative votes. "It's a very bad ruse and obvious discrimination against sexual minorities. Politicians' hate speech is all the more dangerous as it has greater ripple effects in society."

Having to prove one's anti-LGBTQ credentials has become a tradition that no serious political candidate can escape from. The current president is no exception: prior to securing the top job, former human rights lawyer and then candidate Moon Jae-in said on live television that he was "against" homosexuality and "did not like it."

Hong Sung-soo, a law professor at Sookmyung Women's University, believes that while LGBTQ rights are an important issue that can no longer be avoided, the problem is that politicians "cannot even properly give their position on a fundamental issue, or make remarks that encourage hate," he told Nikkei Asia.

Enter the conservative Christian lobby: denominations of the mainly Protestant church, exert tremendous power in South Korea politics. Christians represent 27.7% of the population, holding by far the largest share of religious affiliations in the country. Some 41% of the current National Assembly reportedly identifies as Christian.

"Most Christians and conservatives in South Korea believe that homosexuality is a sin and oppose the legalization of homosexuality," said Koh Hyung-suk, pastor at the Korea Church and member of the United Denominations of the Korean Church Against Homosexuality.

By legalization, Koh is referring to one of the most sensitive issues in South Korean politics: the enactment of an anti-discrimination law. The law would ban discrimination against many categories, including sexual orientation and gender identity. 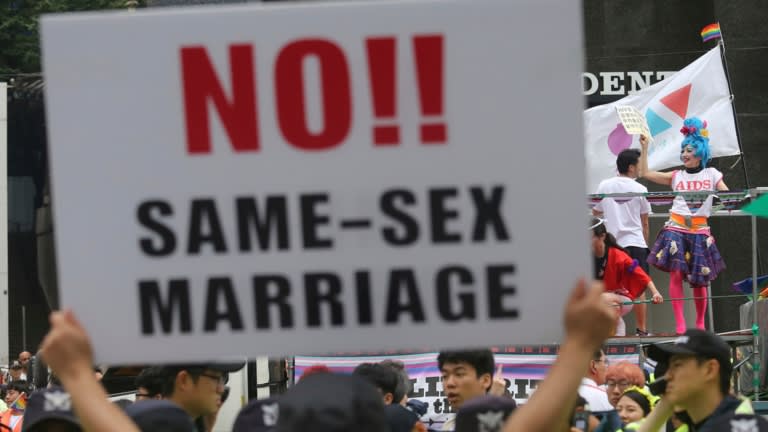 A protester against same-sex marriage holds up a sign at a pride festival in Seoul in July 2017.   © Reuters

Many conservative Christians believe it would pave the way toward legalization of same-sex marriage. They argue it would unleash a "homosexual dictatorship," encourage children to become gay, break the family, spread HIV, bankrupt the state due to associated medical costs, and ultimately collapse society.

A recent survey commissioned by the country's human rights watchdog found that 9 in 10 South Koreans are actually in favor of an anti-discrimination law. Yet since 2007, six attempts to pass the law have failed. A current seventh, proposed by Jang Hye-yeong of the minor Justice Party, is already facing significant resistance.

Lee Sang-min of the Democratic Party has said he plans to introduce his own anti-discrimination bill after the April elections. His bill though, is expected to include a provision granting exceptions to religion, if the discriminatory act is related to the doctrines of that religion.

And so, as Pastor Koh points out, having a Seoul mayor who does not support homosexuality or pride festivals, is vital. "Christians saw the suppression of freedom of religion, freedom of conscience, and freedom of expression in the West where homosexuality was legalized," he told Nikkei Asia.

Professor Hong at Sookmyung Women's University believes that there's more to it than just pressuring politicians. He says the Protestant church is using homosexuality as an "imaginary enemy" on top of a growing list of other targets including transgender people, refugees, and Muslims as a means over overcoming crisis from within.

In recent years, Christianity in South Korea has lost popularity. Young people are turning away from the religion, often viewed as too traditional. Social trust has eroded, and cases of corruption and sexual abuse are not unheard of. A number of major cluster infections hitting churches have done little to abate public frustration.

"Not only is what they are doing undesirable, it will do nothing to solve their own crisis," Hong said.

At a candlelight vigil held outside the country's defense ministry on March 12 in memory of Byun Hee-soo, a transgender rights activist nicknamed Id told Nikkei Asia: "I hope politicians will stop their hatred of sexual minorities and take the lead in changing the public's perception and make efforts to enact an anti-discrimination law that will serve as a foundation for creating an equal society."