Human rights activist vows to 'keep on fighting' under Duterte TOKYO -- The Philippines' independent human rights watchdog has faced many challenges since its inception three decades ago, but according to Jose Luis Martin Gascon, chairman of Commission on Human Rights of the Philippines, the organization has never dealt with a bigger threat than the presidency of Rodrigo Duterte.

The commission's latest challenge is Duterte's decision to withdraw the Philippines from the International Criminal Court on Sunday, despite an uproar from civil society, both domestically and overseas.

Gascon is one of the president's most vocal critics. He and many others believe Duterte pulled out of the ICC because prosecutors with the court had begun a preliminary examination to "analyze crimes allegedly committed" by the government in the drug war.

But in what could be an encouraging news for human rights activists like him, ICC Prosecutor Fatou Bensounda on Monday said the court will retain its jurisdiction over possible crimes committed during the period the when Philippines was a member of the court.

Since Duterte took office in June 2016, over 5,000 drug suspects have been killed, according to government figures. Human rights activists and third-party monitors, including Gascon, say the death toll could be four times higher.

However, Duterte and the police say suspects were killed because they resisted arrest and fought back.

Duterte argues the court and other international organizations are prejudiced. "There is clear bias on the part of the U.N. against the Philippines," Duterte said last year, adding, "The Philippines may very well consider withdrawing from the Rome Statute," referring to the treaty that created the ICC.

The ICC was founded in 2002 and is headquartered in Rome. It investigates and prosecutes cases of gross violations of human rights, war crimes and crimes against humanity when local judicial authorities are unable or unwilling to do so.

"The initial purpose of the decision of the Philippines to join the ICC in 2011 was to contribute to the prevention of the worst crimes in our jurisdiction, and to help end impunity," Gascon told the Nikkei Asian Review. The withdrawal will "frustrate this purpose and ensures the perpetuation of impunity in the Philippines, which is the biggest human rights problem in the country," he said.

The commission has vowed to maintain cooperation with the ICC on "crimes against humanity" despite the withdrawal, Gascon said. "[The court's] preliminary examination and formal investigation should nonetheless proceed," Gascon told Nikkei in an emailed response. He added that the ICC "can continue to indict and put to trial any perpetrator of those crimes if warranted by the evidence they uncover against persons that are living in the Philippines."

For Gascon, who participated in the movement to oust President Ferdinand Marcos in 1986 as a student leader in the "People Power Revolution," and in establishing a liberal democracy in the Philippines, the advent of Duterte is a "tectonic shift away from 30 years of [democracy]." Despite the fact that Duterte was democratically elected, Gascon now says the country's liberal democratic period should be confined to the period between 1986 and 2016. That is, the years between the presidencies of Corazon Acquino and her son Benigno. 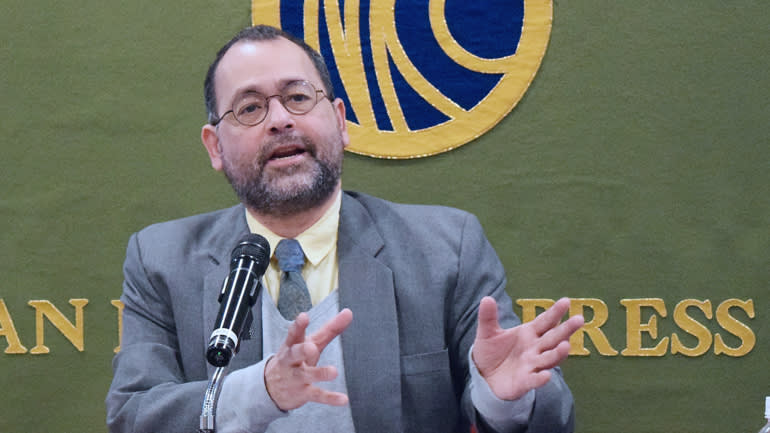 Jose Luis Martin Gascon, chairman of the Commission on Human Rights of the Philippines, speaks about deteriorating human rights in the country at the Japan National Press Club in February. (Photo by Kenji Kawase)

Gascon points to a "qualitative shift" under Duterte. He acknowledges that "every single president have been found short," and there have "always been violations" of human rights since the commission's founding in 1987. But Duterte's government stands for an "outright rejection of human rights, due process, the presumption of innocence and other guarantees that are in our bills of rights," Gascon said.

The commission, which Gascon has headed since 2015, is an independent government institution that was established as a direct result of the democratic constitution promulgated in 1987 following the People Power Revolution. Its mandate is to "conduct investigations on human rights violations against marginalized and vulnerable sectors of the society, involving civil and political rights," as proclaimed in the commission's official website.

The authoritarian threat is not confined to the Philippines, Gascon believes. "The Duterte effect is providing a 'best practice' or a model that others are emulating elsewhere." If Singapore's Prime Minister Lee Kwan Yew, Prime Minister Mahathir Mohamad of Malaysia and Indonesia's President Suharto were the authoritarian voices preaching "Asian values" in Southeast Asia two decades ago, "Duterte is spreading this new gospel that's being encouraged and adopted by other leaders," Gascon said.

He sees geopolitical implications as well, as there is an apparent shift in the Philippines' affiliations to and alliances with other powers. Duterte is "approaching China and Russia in a much friendlier [way]." From a Chinese perspective, it has "found a great ally in Southeast Asia," in addition to Cambodia.

Gascon believes that "diplomacy involving universal values, including human rights and democracy, becomes very relevant today as we challenge the authoritarian alternative that is taking root in many parts of Asia and the world." He warns: "If we don't challenge them now, perhaps tomorrow or the next day or next year, maybe becomes too late and authoritarian forms of government become the norm. Democracy will just be a memory."

Gascon is not in total despair, though. "I haven't lost hope that ultimately equilibrium will return," he said. "I wouldn't say democracy has failed, but democracy is [being] challenged in the Philippines."

The key problem, Gascon believes, is that ordinary people's lives did not improve substantially under either the authoritarian Marcos regime or the democratic administrations between the two Aquinos. Poverty, crime and corruption still scourge.

"The public mood [before Duterte's election] was to support a different form of leadership that might deliver on the promises that democracy failed" to achieve, Gascon said. But he also pointed out that "looking back on history, authoritarian leaders don't have a good track record in delivering quality of life."

As he believes that democracy is "never a destination." There will always be ups and downs, and the "need for renewal and reform." Within this process, people need to "push back against abuses and excesses," and now Gascon is appealing for global solidarity among democracies and like-minded individuals.

Some of Gascon's supporters believe he has reason to fear for his safety. Although his term as commission chairman runs through 2022, Duterte dislikes Gascon and the organization he leads. Duterte once said he would slap Gascon if they crossed paths. One of his allies in Congress unsuccessfully pushed to cut the commission's annual budget to 1,000 Philippine pesos ($20).

"If they want to get to you, they will get you," Gascon said, pointing to the cases of Maria Ressa, an outspoken journalist who runs the online news site Rappler, and Leila de Lima, a senator and a predecessor of Gascon's at the commission.

"To me, it's part of the terrain I have to navigate through. If I get arrested, or worse, it's just part of the landscape," he said. "All we need to do is keep on fighting. Hopefully, it will make a difference."