Humphrey Hawksley: The US Naval War College teaches officers how to not fight the next war A burly figure in a 19th century admiral's uniform, sporting a shock of white hair and bushy sideburns, cast his gaze across the lecture hall to an array of crisp white naval uniforms peppered with khaki -- worn by officers of the U.S. Marine Corps.

"War is a dreadful scourge, a relic of barbarism," said an actor reciting a speech from the first president of America's Naval War College, Adm. Stephen B. Luce. "War may, in certain instances, be averted in one way and one way only. That way is to be fully prepared for it. That is the meaning of this college."

His audience was the latest group of midcareer officers from around the world who take a year out to study the "art and science of war" in classrooms set against the panoramic backdrop of the Rhode Island coastline.

"There are officers from 46 other countries working with me here, so we can learn a great deal from each other," said Cmdr. Kelly Hinderer after the ceremony in August. She usually commands an 11-person crew on a P-3 Orion, conducting naval surveillance and anti-submarine operations. "We are going to dive into joint warfare doctrine and how to approach warfare from a joint perspective."

Since 1884, the Naval War College in the old settlement town of Newport has been a center for research, counterintuitive thinking and intricate war games that have molded U.S. military strategy.

Most recently, there has been a growing focus on the expansion of Chinese naval power in the South China Sea. 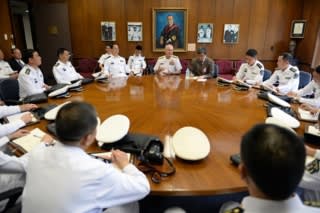 Chinese officers visit the college in May. (Courtesy of Naval War College)

PIVOTS AND OBSTACLES In late September, a global cast of naval chiefs from more than 80 countries gathered in the gray, stately 19th-century building for the International Seapower Symposium held every two years.

High on the agenda was how to protect international shipping lanes, the central issue in the South China Sea dispute.

The U.S. argues that China's relentless construction of military outposts and its claim to more than 90% of the South China Sea threaten freedom of navigation and international trade. China says it owns the territory and has rejected findings by an international panel of maritime judges that its policy is illegal.

The impasse has opened wider discussion -- and fears -- of an outright conflict between China and the U.S. over the contested waters.

Since launching its grandly named pivot to Asia in 2011, the U.S. has been shifting its military focus from conflicts in the Middle East and North Africa to the trillion-dollar trade routes of the Asia-Pacific, where the U.S. has been the predominant power since the defeat of Japan in 1945.

China is now moving to change that, presenting a maritime challenge in which the U.S. Navy will play the central role.

"A conflict with China is certainly not inevitable, as some people say," said Adm. Jeffrey Harley, president of the Naval War College and an alumnus. "When a power continues to rise, we can find space in the world as long as all follow international law."

The sticking point, however, is that China openly dismisses international law, which it sees as slanted toward American interests. The Rand Corp., a U.S. think tank, recently published a study titled "War with China: Thinking Through the Unthinkable." Among its findings are that the U.S. would be better off fighting any war now than a decade from now, when China's military will be more capable.

Added to this, research teams at Harvard's Belfer Center for Science and International Affairs have found that in most cases when a rising power has challenged an existing power, conflict has broken out. In the past century alone, this happened with Germany in Europe and Japan in Asia.

"In 12 of 16 cases over the past 500 years, the result was war," said Graham Allison, who headed the research. "When the parties avoided war, it required huge, painful adjustments in attitudes and actions on the part not just of the challenger but also the challenged."

So far, there has been no substantive adjustment by either Beijing or Washington, with each viewing the South China Sea dispute through a different prism.

The U.S. sees it in 20th-century terms: China's authoritarian government pitting itself against the liberal international system. In Beijing's eyes, control of the South China Sea is needed to secure its maritime borders and prevent a repeat of what has become known as the "century of humiliation," when much of its coastal territory was occupied by Japan and Western powers.

"If you look at past rising powers, it has tended to create the kind of security dilemmas we are seeing today," said Toshi Yoshihara, professor of Asia-Pacific strategy at the naval college. "My reading of history makes me rather pessimistic about the future course of U.S.-Sino relations."

The Naval War College is the oldest institution of its kind in the world. When Luce founded it, the U.S. was in a similar position to China now, consolidating itself as a regional force, challenging stronger, faraway European governments and moving toward becoming the global power it is today. 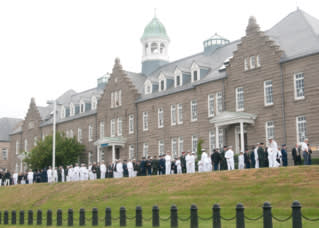 About 80 years ago, students here were war-gaming the rise of Japan in Asia, just as they are doing now with China.

The games themselves are classified, but of particular concern are Beijing's expanding submarine and surface naval forces, and its long-range precision missiles. And as more military hardware is deployed to the region, much energy will go into setting up efficient communications and emergency hotlines.

Until January next year, the U.S. will be focused on the presidential transition after the Nov. 8 election, indicating no quick political solution to the dispute.

Meanwhile, U.S. ships and aircraft will continue freedom of navigation operations that directly challenge China's claim to waters around its newly built military outposts. It is these that run the greatest risk of flaring into direct confrontation.

"You have to walk the dog pretty carefully, particularly when you're the captain of one of those big guns out there," said James Kelly, dean of operational and strategic leadership at the college, who formerly commanded a U.S. carrier group in the Pacific.

Two years ago, China's naval chief, Adm. Wu Shengli, was among the guests at the sea power symposium. This time, he sent a delegation in his place.

Over the two days, naval chiefs listened to lectures from their peers, mingled in the historic halls and manicured grounds and lunched in the open-air cafeteria overlooking Narragansett Bay. They visited the college's museum, with its exhibits of torpedo technology and the 1805 Battle of Trafalgar, and were shown around U.S. warships brought in specially for the symposium. The specter of the dispute with China was always present. "The strategic environment of today presents access challenges that make sea control more critical than ever," said Harley. "The college has enormous influence on the way our maritime forces take the fight to our enemy."

Or in the no-nonsense words of Luce: "To be prepared for war is the rule of the naval strategist."

Navies are not responsible for finding a solution to political crises. But protecting their countries' interests falls to them, should politics fail. Inside the Naval War College, that knowledge shapes almost every aspect of the curriculum.

Humphrey Hawksley is a former BBC correspondent in Beijing and Hong Kong. His next book, "Asian Waters: America, China and the Global Paradox," will be published in October 2017.