ISLAMABAD -- Imran Khan will be sworn in as Pakistan's new prime minister on Saturday, but the former cricket hero will have to bat off a slew of challenges if he is to become the first premier to complete a full term in the country's 71-year history.

Last month's parliamentary elections were shrouded by opposition claims of manipulation linked to the army. As well as having to shake off these allegations, Khan needs to stave off a balance of payments crisis, improve one of the world's worst tax-collection systems, and find a balance between competing demands from China, India, the U.S. and Afghanistan.

Reserves have halved over the past 20 months, with Chinese lending and devaluations of the rupee keeping the nation afloat. At around $10 billion, the country's reserves are barely enough to finance two months of imports.

China has hinted that it will provide financial backing so that Khan's new government won't need to go cap in hand to the International Monetary Fund for a bailout, which the U.S. opposes.

Pakistan also needs continued Chinese investment in the $60 billion China-Pakistan Economic Corridor -- a series of energy and infrastructure projects that are key to Beijing's much vaunted Belt and Road Initiative.

In his acceptance speech last month, Khan promised to create a welfare state. That could be hampered by the fact that less than 1% of the population pays income tax.

"The economic constraints will make it hard for the government to immediately extend relief to the people," said Sakib Sherani, a former adviser to the finance ministry. "They will first have to stabilize the economy. It will take time."

A leading businessman who asked not to be named said Khan risks popular disappointment if he can't deliver on his promises soon. He warned that the new government "will not have a very long honeymoon period." 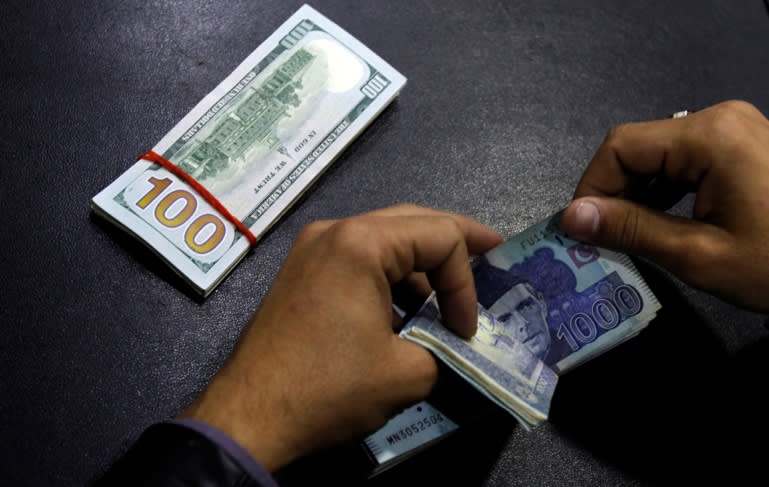 Only 1% of Pakistanis pay income tax, which has helped to create a balance of payments crisis.   © Reuters

Another challenge: Pushing economic reforms through parliament will bring on an opposition backlash.

Perhaps this has already begun. On Wednesday, the new lower house of parliament approved Khan's choice of Asad Qaiser, a senior figure in the his party, as speaker. As Qaiser took his oath, opposition legislators repeatedly interrupted him as an expression of their dissatisfaction with the manner of Khan's election.

One opposition leader who spoke on condition of anonymity said this was a "precursor of the coming times."

A senior Western diplomat, who also asked not to be named, said, "Imran Khan may have won, but it's a half victory and not one that can be fully celebrated."

Shujaat Khan, an Islamabad University student who voted for the opposition PML-N, said painful economic reforms will anger Pakistanis. "The public's mood can change very quickly," he said, "especially if they are put through tough times ahead."

Pakistan is also troubled by geopolitics. Its conflict over the predominantly Muslim state of Kashmir has been long-standing, and it is coming under increasing pressure from the U.S. to restrain Taliban militants that have recently made advances in Afghanistan.

"We are in a region with dangers all around," former diplomat Ali Sarwar Naqvi said. "But Khan is seen like a breath of fresh air. People voted for him because many Pakistani's want to see their country change, and he is widely seen as the man who can bring that change."