Modi's astute approach has been especially notable in his handling of China, meeting repeatedly with Chinese President Xi Jinping to lure investment while launching a security dialogue with Australia, Japan and the U.S.

With Modi's Bharatiya Janata Party reportedly leading the election, it is almost certain that India will maintain warm -- if not slightly reserved -- relations with China.

At a campaign rally in the western state of Gujarat on April 17, Modi promoted himself as a strong leader capable of protecting Indian soldiers. His speech was designed to fan nationalistic fervor during this politically charged time, lashing out at Islamabad after a February suicide attack on Indian security personnel by Pakistan-based Islamist militants.

He also gave prominent play to India's success of a test shoot-down of a satellite in March, joining the U.S., China and Russia as the only nation's capable of destroying targets in space.

Tellingly, the government carried out the test before the election to give Modi added fuel for his speeches as he casts himself as a forward-thinking leader who is pushing the country's development of space defense technologies.

In the summer of 2017, a monthslong border standoff between Indian and Chinese forces brought the countries to the brink of their first military clash in half a century. They pushed the Modi administration closer to Australia, Japan and the U.S., as the four countries dusted off their Quadrilateral Security Dialogue in an attempt to counter China's military power.

To assuage Beijing's feelings, Modi installed a diplomat familiar with China as his foreign secretary. This was followed by a private meeting with Xi in China in April 2018 in a bid to ease tensions. 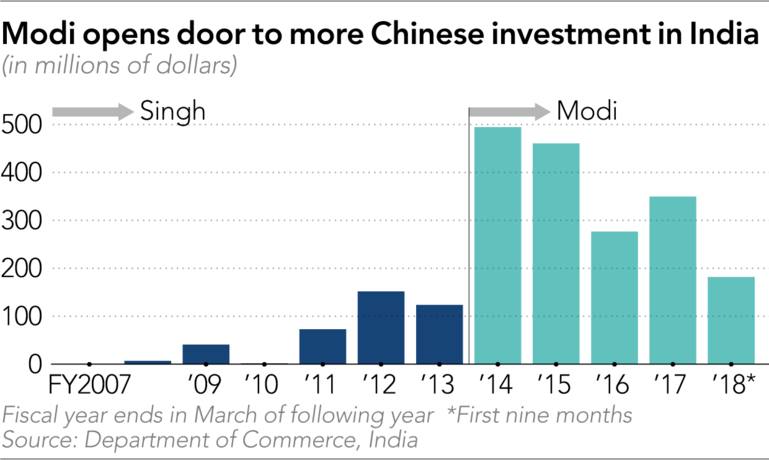 Modi's move is motivated by "his ambition to go down history of India, political history of India as one of the tallest leader India ever produced," said Sanjay Kumar, a professor and the director at the Delhi-based think-tank, Centre for the Study of Developing Societies. To realize this, the prime minister may feel his administration's military prowess needs to be matched by economic achievements, hence Modi's continued overtures to Beijing to lure investment and technology.

This is a sensible stance, considering China is India's biggest trading partner. Indian exports mineral resources to China while importing machinery and other manufactured goods.

Chinese direct investment in India has markedly increased under Modi, topping $1.7 billion over only the past 4 1/2 years. This compares with the $400 million India received during the 10-year reign of Modi's predecessor Manmohan Singh.

"While Singh met then-Chinese Premier Wen Jiabao, Modi has met with Xi, China's number one leader, as many as 15 times," said Ashok Kantha, a former Indian ambassador to China. In contrast, Modi has met U.S. President Donald Trump only three times, according to an official of India's ministry of foreign affairs.

The ruling BJP appears to be headed for victory in the current election, according to opinion polls done by April. But if Rahul Gandhi's Indian National Congress -- which was voted out in the previous election -- wins the race, India is widely expected to return to its traditional nonaligned status and keep equal distance between Western and Eastern nations.

The country holds a general election for lower house members every five years. The seven-phase election started on April 11 and will continue until May 19, with vote counting to end by May 23.