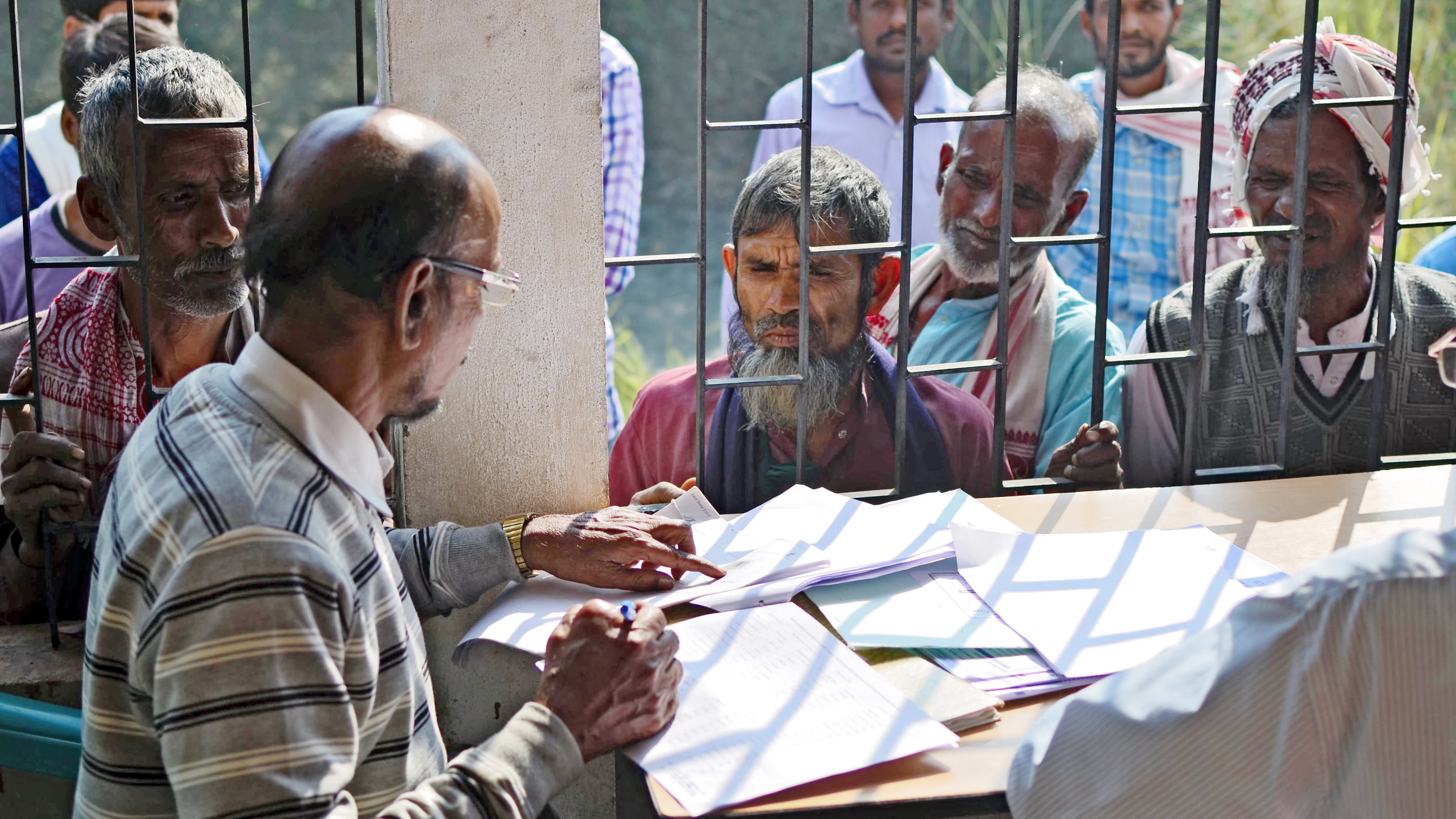 Assam residents wait to check whether they made the first draft of the National Register of Citizens in the state's Kamrup district in January. (AFP/Jiji)
CHAITANYA KALBAG, Contributing writerJune 28, 2018 15:56 JST | India
CopyCopied

NEW DELHI -- India's northeastern border state of Assam is waiting with trepidation for the results of a citizenship census that could have major political, sectarian and diplomatic consequences just months before the country's next general election.

The National Register of Citizens, which will identify mostly Muslim immigrants from Bangladesh who are living in the state illegally, is due to be published on Saturday. The question is what the government will do with these people, and whether they will be deported to Bangladesh, which itself is grappling with an influx of Rohingya refugees from Myanmar.

Upon completion, the NRC will verify the citizenship of 32.9 million residents of Assam. Large population surges in the oil-, tea- and rice-producing state, recorded in censuses conducted every 10 years since 1951, caused a violent anti-immigrant campaign to erupt in 1979.

In August 1985, in an attempt to end the unrest, the Indian government agreed with Assamese nationalist politicians that it would treat as a foreigner any migrant who entered the state after March 24, 1971. That cutoff date marked the outbreak of the Bangladesh war of liberation, an event that triggered a flood of Bengali-speaking refugees into eastern India.

Most of those refugees eventually returned to the newly created Bangladesh, but Assamese politicians claim millions of foreigners have settled in the Indian state, occupying fertile farmland.

There has been no reliable count so far. A total of 125,333 "D" or "Doubtful" voters were disenfranchised by the Election Commission in 1997. Another 90,000 people have been referred to Foreigners' Tribunals by border police. Last Friday, the Assam high court ruled that their siblings, too, will be kept off the NRC until the tribunals decide their fate. State Coordinator Prateek Hajela, the senior official who has headed the mammoth NRC exercise since it was launched in September 2013 under the supervision of the nation's Supreme Court, says the conclusion might be delayed by a few days because of monsoon flooding in some Assam districts.

This month's second list will decide the future of the remaining 13.9 million applicants. "We have now decided about them, and that is the list that will be published," Hajela told the Nikkei Asian Review. "There will be some people whose names will not appear on the final list."

Prime Minister Narendra Modi had vowed to eject "Bangladeshi infiltrators" during the 2014 election campaign. His Bharatiya Janata Party won a sweeping victory over the Congress party in Assam's state elections in April 2016, helped by polarization over immigration.

An army of 40,000 NRC officials and 10,000 data operators has sifted through more than 70 million documents, many of them yellowing and crumbling with age. They have recorded and digitized the papers, and painstakingly constructed "family trees" for 900,000 "legacy" immigrants who entered the state legally before March 1971.

Since January, about 10 million people traveled across Assam and from elsewhere in India to present themselves for hearings. All the descendants of the legacy immigrants had to appear together before NRC officials at 5,000 locations to prove their identities.

"People had to go through various stages in verification of documents and then family trees," Hajela said. "We also had to look at consistency in dates, age gaps between parents and children." He said the hearings were held in open sessions, and on time.

Aided by technology and rigorous cross-checking, the numbers from the NRC will be very accurate, Hajela said. "It has been a long wait, and I can say it will be a fruitful exercise."

As the date of the NRC's publication nears, tensions and tempers are rising across Assam. Hajela said any estimate of the number of foreigners, and fears that they will be forced to leave Assam, are speculative. "A number of organizations are trying to scuttle the process because we are coming to the end ... some organizations, some political parties are trying to instill fear in the minds of the public."

It is not clear what the government will do once there is a final list of immigrants residing illegally. Striking their names off voters' lists could be a first step, but authorities have not said how they will deal with issues of land ownership and jobs in Assam's struggling economy.

There is no formal agreement with Bangladesh to deport illegal migrants, although Modi has built good relations with Bangladesh's Prime Minister Sheikh Hasina. Bangladesh agreed in early June to take back 53 of its nationals in Assam jails who had been convicted of crimes, but officials have said Dhaka is not prepared to repatriate immigrants identified as illegal by the Foreigners' Tribunals. Bangladesh is already struggling to cope with about 700,000 mostly Muslim Rohingya refugees who have fled Myanmar to take shelter in makeshift camps.

The NRC will also not stop continuing migration across the porous border. In April, India's border troops rolled out a 55km "smart fence" combining surveillance and warning technologies along the Brahmaputra River, where shifting sand banks make policing difficult.

To add to the pressure on the prime minister ahead of the election, Assamese nationalists also oppose a bill pending in parliament since 2016 that seeks to fulfill a Modi promise to grant citizenship to immigrants from Bangladesh, Pakistan and Afghanistan -- so long as they are Hindus, Sikhs, Jains or Christians. The Assamese do not want more Bengali-speaking immigrants, and critics say the proposed legislation violates the Indian constitution's guarantee of religious equality.

People whose names do not appear on the final list of citizens will have one month to file claims for reconsideration with Hajela's team. NRC officials believe such objections will be handled by the end of 2018. Those who are not on the list at the end will still be able to appeal to the 100 foreigners' tribunals. The legal process could take years.