NEW DELHI -- Indian Prime Minister Narendra Modi on Thursday said his government's decision to end the special status granted to Kashmir -- a long-standing flashpoint in relations with neighboring Pakistan -- will rid the restive region of decades of terrorism.

"We have taken a historic decision," Modi said in a televised address to the nation.

The speech followed Monday's move to gut Article 370 of the Indian constitution, which allowed a kind of autonomy to the state of Jammu and Kashmir, as the Indian-administered portion of Kashmir is known. This autonomy included framing its own laws and not allowing people from other parts of the country to buy property there.

Modi called Article 370 "a big hurdle" to the development of the region, which he said will now see more youth job opportunities and state social welfare programs. The 70-year-old constitutional provision "did not give the state anything other than terrorism, separatism and corruption," he said.

"A new era has begun in Jammu and Kashmir and Ladakh," he said, adding now people across the country will have same rights and duties. 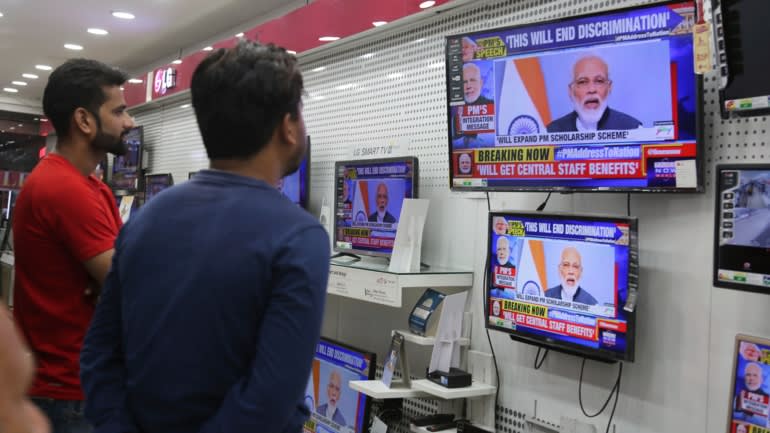 Men at an electronics store in Jammu watch Indian Prime Minister Narendra Modi address the nation in a televised speech on Aug. 8.   © AP

The Modi government has also decided to split the Indian-controlled portion into two areas. One, called Jammu and Kashmir, will have its own legislative assembly, while the other, Ladakh, will not.

The government led by the Hindu nationalist Bharatiya Janata Party, which has long wanted the special status to be repealed, has deployed thousands of additional troops in Kashmir in a bid to prevent possible unrest in the region.

Mobile telephone and internet services remain suspended, and gatherings of four or more people are banned in some parts. At least 300 political leaders and separatists had been put in detention, according to reports.

The Office of the United Nations High Commissioner for Human Rights on Wednesday expressed concern that the latest restrictions in Indian-administered Kashmir will "exacerbate" the human rights situation in the region. "The fact that hardly any information at all is currently coming out is of great concern in itself," the office said on Twitter.

Modi in his speech assured the people of the region that the situation will gradually return to normal.

Shortly before Modi's address, his Pakistani counterpart Imran Khan tweeted: "the whole world is waiting to see what happens to oppressed Kashmiris... when curfew is lifted."

"Does the BJP [government] think by using greater military force against Kashmiris... it will stop the freedom movement? Chances are it will gain momentum," he added.

India accuses Pakistan of backing an insurgency in Jammu and Kashmir that has claimed over 42,000 lives in the past three decades. Islamabad denies this and says it only gives moral and diplomatic support to Kashmiris seeking self-determination.

Kashmir, claimed by both countries, is the main source of friction in their ties. The two nuclear-armed neighbors have fought two major wars over the region since their partition at the end of British rule in 1947. Aerial attacks flared up as recently as February.

Upset with India's steps in Kashmir, Pakistan on Thursday suspended the train service with the neighboring country, a day after announcing that it would expel India's envoy and that Islamabad's ambassador, who was to soon start his stint in New Delhi, would not go to India.

Reacting to Islamabad's "unilateral" decision to downgrade bilateral ties, the Indian government said on Thursday it "regrets the steps announced by Pakistan... and would urge that country to review them so that normal channels for diplomatic communications are preserved."

"The recent developments pertaining to Article 370 are entirely the internal affair of India," the External Affairs Ministry said in a statement, adding the intention behind Pakistan's measures "is obviously to present an alarming picture to the world of our bilateral ties."

China, a close ally of Pakistan that borders the region, expressed "serious concern" about the current situation in Jammu and Kashmir and said both sides should "refrain from taking actions that will unilaterally change the status quo."

"We call on both India and Pakistan to peacefully resolve the relevant disputes through dialogue and consultation and safeguard peace and stability in the region," Chinese foreign ministry spokesperson Hua Chunying said on Tuesday.

In his address on Thursday, Modi also said the local elections in Jammu and Kashmir will be held soon and people there will get the opportunity to choose their representatives in a transparent manner.

"Let's build a new Jammu and Kashmir and a new Ladakh along with a new India," he said in his concluding remarks.