NEW DELHI -- Five of India's states, with a combined population of over 200 million, are holding elections between Nov. 12 and Dec. 7, with the outcome expected to set the stage for the 2019 general elections in which Prime Minister Narendra Modi will likely seek a second five-year term.

Some political analysts have dubbed the state polls a "semifinal." The results will offer hints on who has the momentum ahead of the general election due to be held by next May.

Of those states, Modi's Bharatiya Janata Party is in power in Chhattisgarh, Madhya Pradesh and Rajasthan, and is expected to contest directly with the main opposition Indian National Congress.

A pre-election survey by ABP News and C-Voter in August forecasts an INC win in all three BJP-ruled states. But the survey pointed out that the majority of voters in these states do not want a change of government in New Delhi; Modi remains their preferred choice for the prime ministership. The BJP has been in power for 15 years in Madhya Pradesh and Chhattisgarh. It ousted the INC in Rajasthan in 2013.

"It's not that the party which is going to win [these polls] will definitely win in similar manner in 2019, but there would be some indication of what is going to happen [in nationwide polls]," said Sanjay Kumar, director of the New Delhi-based Centre for the Study of Developing Societies. 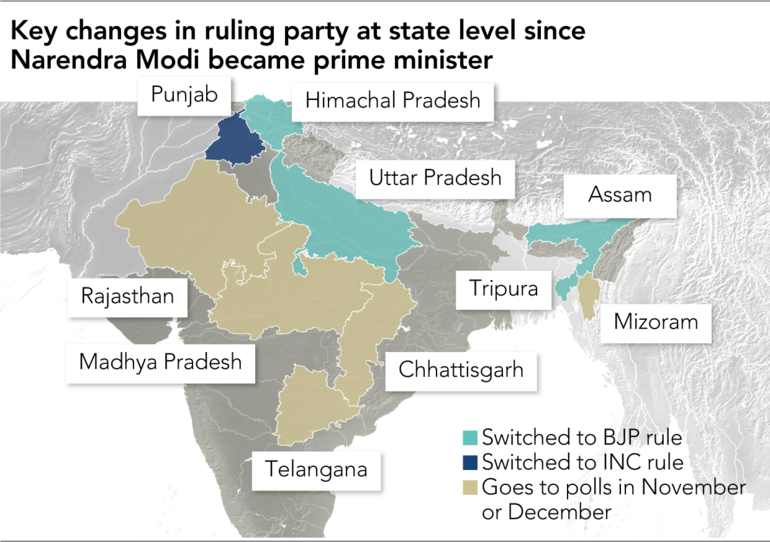 Elections in India's central state of Chhattisgarh will be held in two phases, on Nov. 12 and Nov. 20, while neighboring Madhya Pradesh and northeastern Mizoram will cast ballots on Nov. 28. Rajasthan, in the northwest, and southern Telangana go to polls on Dec 7. The vote counting in all five states will take place on Dec. 11 and the result will be declared soon after.

Since Modi came to power in May 2014 his charisma has helped the BJP. The party has snatched control of several states from INC and other opposition parties, including in Uttar Pradesh and Himachal Pradesh in the north, as well as in the northeastern states of Assam and Tripura.

In 2013, when Modi was named the BJP's prime ministerial candidate for the general election the following year, the party and its allies ruled just seven states. Under his leadership, that number has risen to 20. "Today, the BJP is the richest, largest, and most dominant political party in India," according to a September report by the Observer Research Foundation, a public policy think tank.

However, in the upcoming polls, the BJP is unlikely to have an easy time retaining power in all the states it controls. The INC bounced back in 2017 by winning the election in northern Punjab, where the BJP had been sharing power with an ally. Modi's party just managed to retain its majority in the prime minister's home state of Gujarat in India's west.

Another opinion poll by ABP News and C-Voter in early October forecast Modi's return to power in 2019, albeit with a reduced majority for the BJP-led National Democratic Alliance -- 276 seats out of the 543 in the lower house of parliament, compared with the 336 seats it won in 2014.

Analysts say it is important for the BJP to retain power in Madhya Pradesh, Chhattisgarh and Rajasthan to send a strong signal ahead of the general election that it remains a force to be reckoned with, while a victory for the INC will boost its standing ahead of the nationwide polls.