Road blockade planned for Saturday, with food for motorists, after months of unrest NEW DELHI -- Kartar Singh, a 75-year-old sugar cane farmer from the northern Indian state of Uttar Pradesh, has been camping alongside thousands of others at the edge of New Delhi for over two months.

Together, they are fighting the Narendra Modi government's contentious agriculture laws in one of the largest mass protests the country has seen. Their show of determination has drawn global attention from the likes of pop star Rhianna and climate activist Greta Thunberg.

And they are ready to crank up the pressure further with plans to block traffic this weekend.

"I am here for the past 70 days and will continue to protest until the withdrawal of three agriculture laws which benefit only big corporates at the cost of farmers' livelihood," Singh said at the capital's Ghazipur border, one of the three main protest sites. He and his fellow demonstrators live in makeshift tents and are given free food and water by individuals and organizations that support their cause.

"Modi will have to take these laws back," he added.

The battle, which started in late November, poses a major challenge for the prime minister.

On Jan. 26, India's 72nd Republic Day, the protests turned violent as some demonstrators staged a tractor rally, clashed with police and stormed New Delhi's historic Red Fort. For a few days afterward, it appeared the movement might fizzle out, but an emotional appeal for support by prominent farmer leader Rakesh Tikait galvanized peasants in India's north and gave the campaign fresh impetus.

With the new legislation approved by parliament in September, the government aims to liberalize the agricultural sector, which contributes 15% to the country's gross domestic product and employs about half its workforce. Farmers, protected from the free market for decades, will be allowed to enter into direct selling agreements with food processing industries and agencies, wholesale and retail traders as well as exporters.

Growers fear the reforms will lead to the dismantling of government-regulated wholesale markets and the minimum support price, or MSP, that they receive for their crops. This could leave them at the mercy of private companies that may have the clout to dictate terms.

Vivek Panwar, 45, another farmer protesting at Ghazipur, said he voted for Modi twice but "got nothing" in return.

"We will not go back even if it takes years for our demands to be fulfilled," he said, stressing that his entire family is involved in farming, including his wife and two sons. "We are poor people and have no other source of income. These agriculture reforms are not going to do us any good." Farmers Vivek Panwar and Kartar Singh, second and third from right in the front row, spoke with Nikkei Asia at a protest site on the outskirts of New Delhi on Feb. 4. They vowed to keep up their fight until the controversial farm laws are repealed. (Photo by Kiran Sharma)

Attempting to break the impasse, the government has offered to suspend the laws for up to 18 months. But the protest leaders continue to insist on the total repeal of the reforms. So far, 11 rounds of talks between the two sides have been fruitless.

On Jan. 31, Modi told various political party leaders that his government was approaching the challenge with an open mind, and that his agriculture minister "is just a phone call away" if the farmers are ready to push the talks forward.

Instead, the farmers looks ready to up the ante: They have announced plans for a road and highway blockade for three hours on Saturday. Police have beefed up security in preparation, installing barricades and barbed wire around protest sites while suspending the internet in some areas. Security forces have beefed up measures to protect the capital from the protesting farmers, including these spikes seen at the city's Tikri border on Feb. 4.   © Reuters

"The blockade will not happen in Delhi but other parts of the country," Tikait said on Thursday. He added that motorists who wind up stuck on the roads "will be offered water and food, and will be told what the government is doing with us."

Analysts say it is difficult to predict where the movement is headed since both the farmers and the government are convinced they are right. "What we see at the moment is a complete deadlock," Sanjay Kumar, a professor at the Centre for the Study of Developing Societies, told Nikkei Asia.

While the Modi government is "certainly getting bad press" internationally, Kumar said the standoff is unlikely to impact the electoral prospects of the prime minister and his Bharatiya Janata Party. "That is why the government is adamant about not budging," he said, pointing out that the farmers gathering at the Delhi borders do not represent the entire agricultural community. He said most hail from the northern states of Punjab, Haryana and parts of Uttar Pradesh and Rajasthan.

But Kumar said the protesters are also standing firm because the leaders know that "if they give up now, without getting anything out of this movement that they have already carried out for over 70 days, then for many decades to come they will find it very difficult to reorganize these farmers." 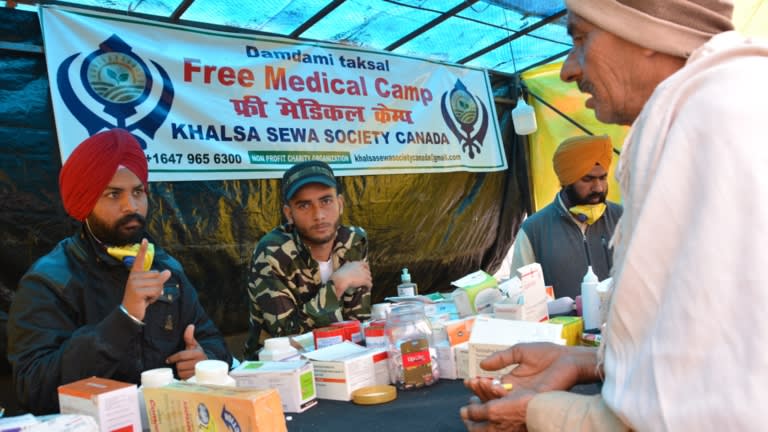 Protesters at the Ghazipur border site are offered free medical care with support from a Canada-based organization on Feb. 4. (Photo by Kiran Sharma)

The farmers might take solace in having some big international names on their side. Rihanna this week tweeted a news story about the protests, asking, "why aren't we talking about this?!" Thunberg, meanwhile, shared guidance on how to support the movement.

Both young women soon found themselves targeted by a wave of condemnation from Indian officials, ruling party leaders, film stars and cricketers who felt compelled to defend their country, using hashtags such as "IndiaTogether" and "IndiaAgainstPropaganda."

"It is unfortunate to see vested interest groups trying to enforce their agenda on these protests, and derail them," the country's External Affairs Ministry said on Wednesday in a rare statement on comments made by "foreign individuals." "Some of these vested interest groups have also tried to mobilize international support against India."

For now, protesters continue to converge on the Delhi border points, vowing to scale up their demonstrations. "I have come along with 150 people from my village in Gurdaspur in Punjab to support my farmer brothers," said Harminder Singh, 63. "Apart from the repeal of the farm laws, we want the MSP to become our legal right."

"We have no other problem with Modi," said Ramheth, 22, a farmer from Rajasthan who grows wheat and mustard. "Once he takes these laws back, we will be satisfied."

Among the women taking up the cause are Reshampati, 72, and Manisha, 40, who reside in Amroha in Uttar Pradesh. "We came here on Tuesday in a tractor filled with food supplies for the protesting farmers. This is our contribution in this movement," said Manisha at the Ghazipur site.

Reshampati chimed in: "We are also from farming families and understand all the pain these protesters are going through."