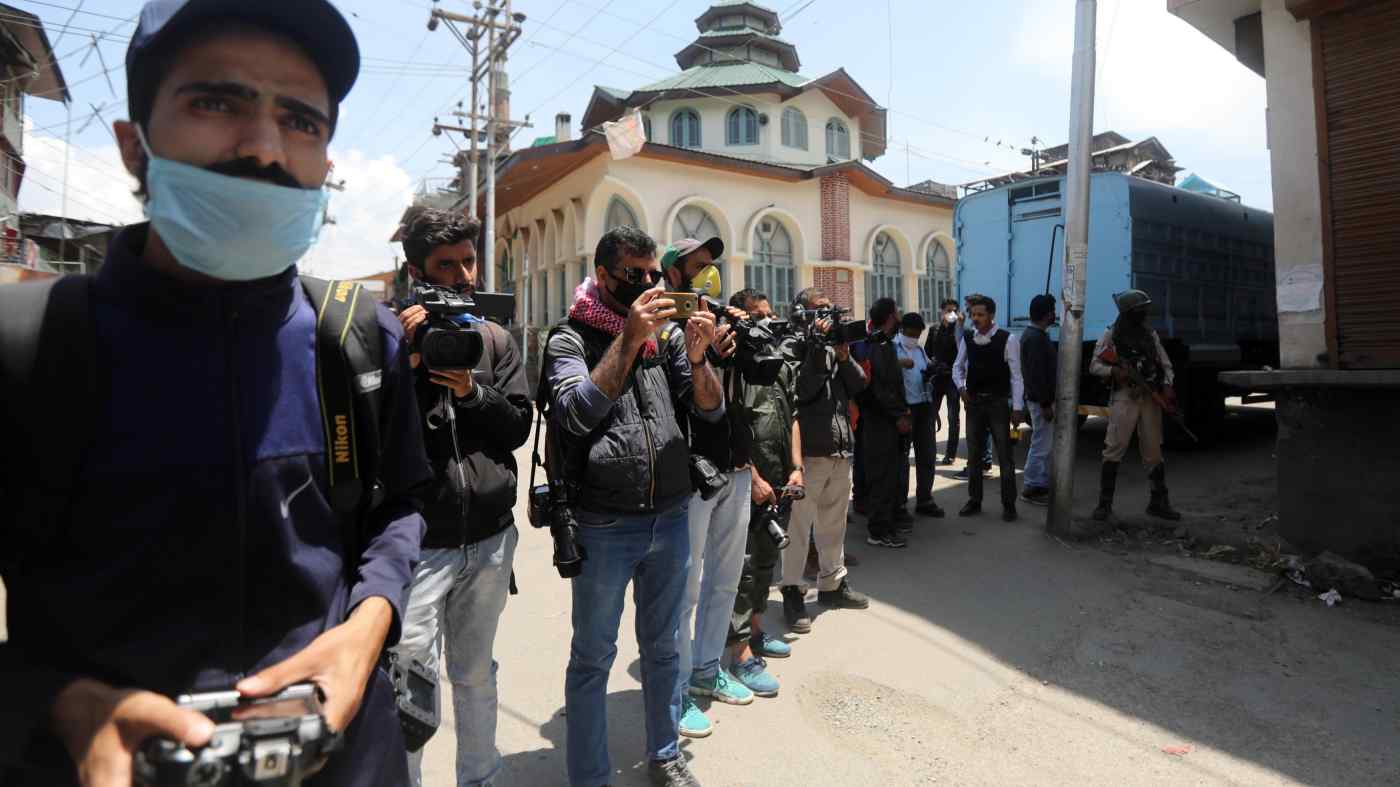 Journalists covering a gunfight in downtown Srinagar in Kashmir where over a dozen of residential houses were damaged during the operation in May. (Photo by Umer Asif)
KAISAR ANDRABI and SHAKIR MIR, Contributing writersApril 28, 2021 13:59 JST | India
CopyCopied

SRINAGAR -- Every time a gunfight starts between armed rebels and Indian forces in Kashmir, Qisar Mir, 22, a photojournalist from the town of Pulwama, quickly slings a camera across his shoulder, mounts his motorbike and speeds off.

Mir makes a living taking video and photos of such skirmishes -- mortar shells, corpses, burning houses. If the visuals do not make it to his editors on time -- he competes with some of India's powerful and access-driven wire news agencies -- Mir loses out on a payday.

"Last month, I filed 20 stories to my organization but I was paid only for five stories, as they had used visuals [from] a national wire service that enjoys closer access to these spots," he said.

Mir, who typically earns around $67 a month as a photographer, is already struggling to make ends meet. Now a decree from the Indian government threatens to doom the already fraught careers of Mir and more than 200 other photojournalists in the contested region. Control of Kashmir is split between India and Pakistan, and the region is bedeviled by a three-decade-old struggle between the government and independence-seeking militants.

Earlier this month police in Kashmir, operating under the direct control of India's Home Affairs Ministry, warned that they would charge photojournalists and media professionals who approach the scene of gunbattles, cover clashes between police and protesters or publish news that promotes "anti-national sentiment."

The announcement comes amid reports of violence against photographers who had gathered to document a similar confrontation on April 2. A video clip that went viral on Twitter showed a police officer hitting Mir in the leg.

Already journalists in Kashmir face serious challenges to their livelihoods. Last year, India rolled out a new media policy that threatens to pull advertisements from publications whose reporting is deemed "anti-national." The policy, which has been criticized by Reporters Without Borders, also seeks to punish journalists who publish "fake news."

On Tuesday, the international watchdog group released its World Press Freedom Index 2021. It called the situation in Kashmir "very worrying," adding that "reporters are often harassed by police and paramilitaries" in the region.

The Indian government is sensitive about reporting on Kashmir, where its forces have been accused of serious human rights violations. Vijay Kumar, India's top police official in the region, did not respond to Nikkei Asia's request for comment on the contentious media policy, although at a news conference earlier this month he said the decision to impose restrictions on the media stemmed from concerns that "bullets can strike journalists" when gunbattles are underway. 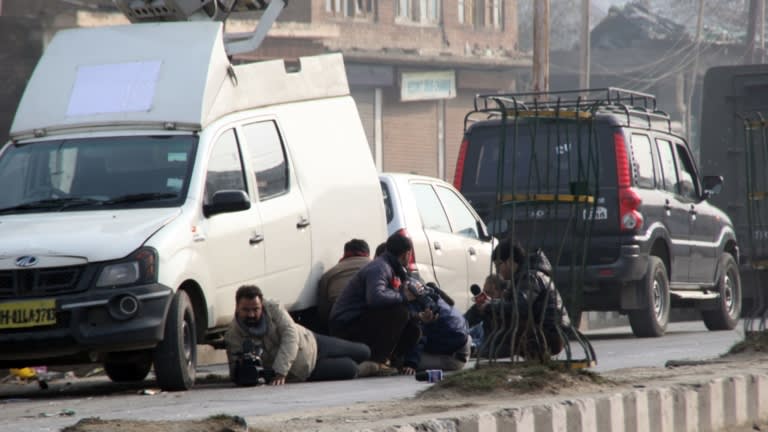 Journalists risk their lives to cover battles between armed rebels and Indian troops in Kashmir but are paid a pittance for their efforts. (Photo by Umer Asif)

The new prohibitions, which the Editors Guild of India last week called "draconian and undemocratic," have left hundreds of journalists, photographers and stringers in Kashmir worried about their livelihoods.

"Visuals of the conflict in Kashmir have an international audience," said Naveed ul Haq, 21, a multimedia journalist from the town of Budgam, 14 km from Srinagar, Kashmir's main city. "The advisory effectively prevents me from pitching photo stories to foreign press, who pay many times more than the regional media. International media requires exclusive pictures that I can manage to shoot only when I get closer to these scenes."

Haq, whose work features in Getty Images, Shutterstock and Russian public broadcaster RT, said international publications pay $60 to $200 for the same photographs that sell for just $6 in the regional media.

At least four photojournalists said police barred their approach to the scene of a firefight in the village of Semthan, in southern Kashmir, on April 10.

Peerzada Waseem, 26, a video journalist from the town of Sopore in the of north Kashmir whose work has featured in Jewish Currents magazine, said his camera has been "rusting" inside his closet because he is scared to venture to the scene of protests or gunfights, fearing police action.

There is another aspect of Kashmir's violent conflict that the restrictions are likely to influence: documentation of the damage these battles leave in their wake. Earlier this month, Indian forces were recorded blowing up a house with improvised explosive devices during a gunfight in the town of Kakapora, in southern Kashmir.

In March, at least six homes were reduced to heap of smoldering debris during an exchange of fire in the village of Rawalpora, in southern Kashmir. The destruction of property is an emotive issue for Kashmiris, many of whom resent Indian rule, fueling political unrest.

Umar Mehraj, a multimedia journalist who has reported on the conflict in the region for 15 years, said restricting access to these sites threatens to make truth a casualty. "We don't want to cover only one side of the story, we want to cover both sides of it. If [we are] not given access, how can the truth come out?" he said. "Most crucially, it's the stringers who're dependent on these stories. They go and report from the remote areas [that] journalists from Srinagar cannot reach quickly. For them, the advisory endangers their careers."

The effects of the media clampdown are starting to show. Journalists in Kashmir are increasingly turning away from the profession, contemplating switching to other jobs. Haq said his family is pressuring him to give up journalism. "They always advise me to stop working in media. This stands in stark contrast to the feeling of elation with which they had initially welcomed my decision to become a journalist," he said.