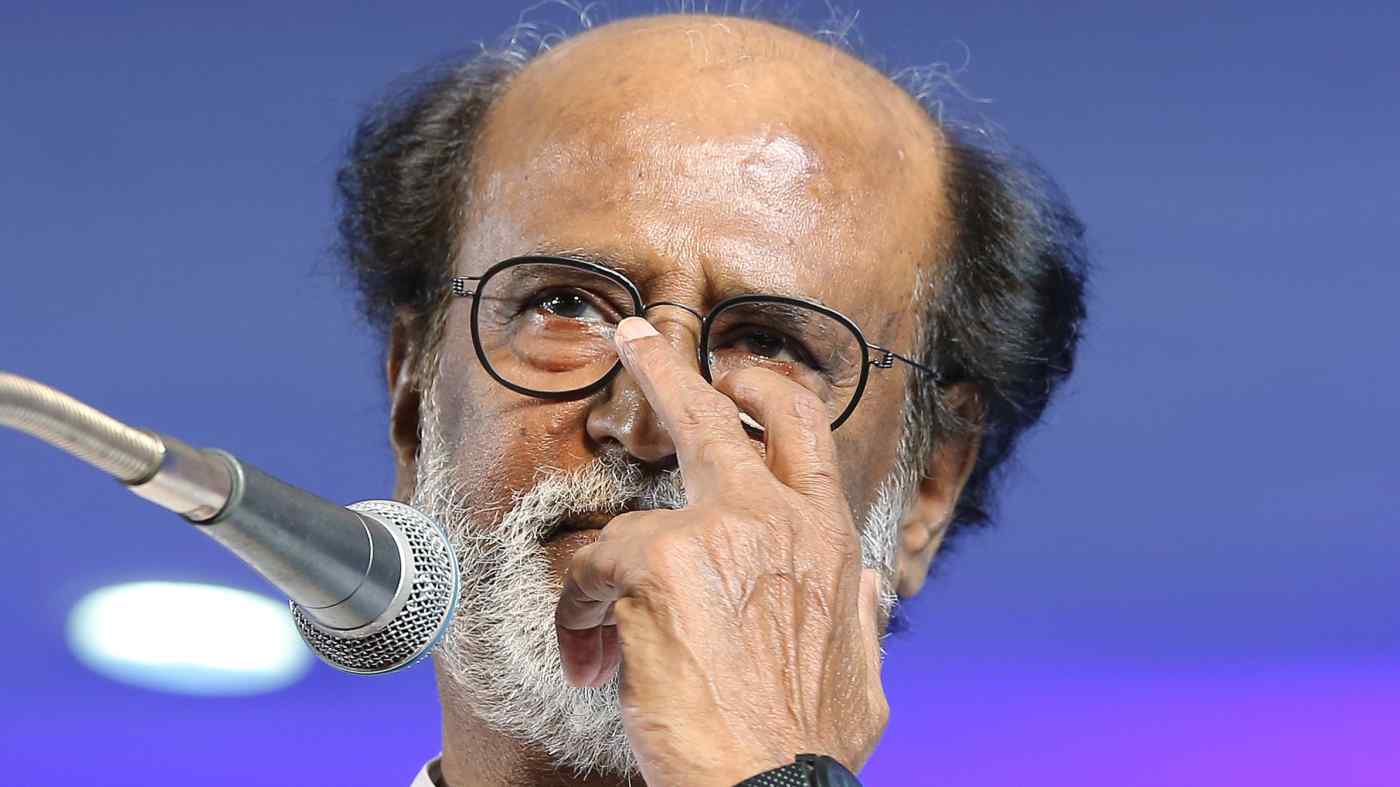 "It's now or never" for Rajinikanth, who told fans three years ago he would segue into politics.   © Reuters
KIRAN SHARMA, Nikkei staff writerDecember 6, 2020 14:02 JST | India
CopyCopied

He will launch a party in January after announcing it on Dec. 31, the actor tweeted on Thursday.

"It's now or never," Rajinikanth said, months before the southern state of Tamil Nadu goes to the polls. The state is ruled by All India Anna Dravida Munnetra Kazhagam, a local party and ally of the Bharatiya Janata Party of Prime Minister Narendra Modi.

Elections are due by May but because of the way India votes, they could begin in April and run into May. Nothing has been announced yet.

Rajinikanth expressed confidence that "with the people's support" the upcoming state elections will lead to "transparent, corruption-free ... and spiritual politics."

"[It's time] to change the fate of Tamil Nadu," the actor known for playing larger-than-life roles in action thrillers, later told reporters.

Born as Shivaji Rao Gaekwad, the actor three years ago made public his plans to jump into politics.

His fans have long been asking him to enter politics in Tamil Nadu, a state whose film industry has produced chief ministers such as M. Karunanidhi, M.G. Ramachandran and J. Jayalalithaa.

Rajinikanth, one of India's highest-paid movie stars, also has a huge overseas fan base, including in Japan, where his 1995 film "Muthu" became a hit. The movie was titled "Odoru Maharaja," or Dancing Maharajah.

The star's fans are crazy about his iconic habits, the way he dons goggles, flips cigarettes into his mouth and walks with a prideful, confident gait. Among his blockbusters are "Baasha," "Padayappa" and "Sivaji: The Boss."

Though it is not yet known whether the actor, who turns 70 on Saturday, will align his political outfit with an established party for the state elections, he has often showered praise on Modi and supported his BJP-led national government's policies, including Modi's scrapping of the special status of the then state of Jammu and Kashmir in August 2019 and the contentious Citizenship Amendment Act, which fast-tracks naturalization for non-Muslims who fled persecution in neighboring nations.

He is also known for criticizing BJP ally AIADMK for its policies in Tamil Nadu, including a decision in May to reopen liquor stores that were forced to close two months earlier due to the coronavirus-triggered lockdown.

"He has been soft toward the BJP and he seems to be inclined with the party's ideology in politics," professor Sanjay Kumar of the Centre for the Study of Developing Societies told Nikkei Asia.

Kumar added that Rajinikanth may be looking for an ally as this is going to be his very first election, and "the BJP would be a natural ally in that respect."

However, given the local situation, "I'm not sure if Rajinikanth would like to join an alliance" that includes the BJP and AIADMK, Kumar said. "We need to wait for some more time [to see] how things unfold." Political observers wonder if voters, like this man walking by the star's posters in Mumbai, will pay no notice to Rajinikanth once he steps into the political arena.   © Reuters

The BJP, which is not a major political force in Tamil Nadu, has welcomed the actor's entry into politics. Rajinikanth's "views are very similar to [the BJP's] views," Narayanan Thirupathy, the party's spokesperson in Tamil Nadu, told an Indian news channel, indicating that the BJP is open to joining hands with the actor.

However, Rajinikanth may not have a big role to play in state politics, already dominated by two established parties, the ruling AIADMK and the opposition Dravida Munnetra Kazhagam.

Kamal Hassan, another popular Tamil star, launched a political party in 2018 and fielded candidates for all of the state's 39 parliamentary seats during last year's national elections. It failed to win any of the races.

"In a situation, where political parties are already stable, and [when] there's no upsurge against the ... political system prevailing in the state, it may not be easy for any new political party [to make a difference]," Kumar said. "[As a celebrity], Rajinikanth would be able to catch TV cameras and the press [like Hassan did], but I don't think he is going to make a huge political impact in Tamil Nadu."