GUWAHATI, India -- On the eve of International Women's Day, nearly 2,000 women laborers from the tea gardens of Dhekiajuli, a town in Assam's Sonitpur district, took to the streets demanding a "reasonable" hike in their daily wages after the state government last month approved a 50-rupee ($0.7) increase.

Led by the All Adivasi Women's Association (AAWA), the protesters have since September been demanding the increase of their daily wage from 167 rupees to 351 rupees.

The much larger increase was promised in the 2016 state election by the Bharatiya Janata Party (BJP), which won power in Assam two years after it did so nationally. With the state going to the polls again on Mar. 27, Varia said the best option will be to "change the government."

"The BJP government has led us on with their false promises and are trying to pacify us by giving 3,000 rupees in direct cash benefits," Mariam Varla, the AAWA secretary general, told Nikkei Asia. "The hike is interim so we can't be sure if it's here to stay."

Last month, Prime Minister Narendra Modi addressed the tea workers at a campaign rally in Dhekiajuli, and made much of the transfer of 3,000 rupees into the bank accounts of 750,000 tea garden workers. This group is found mostly in northern Assam where it accounts for about a fifth of the population, making it a significant voting block with a particularly strong influence in 40 of the state's 126 constituencies. 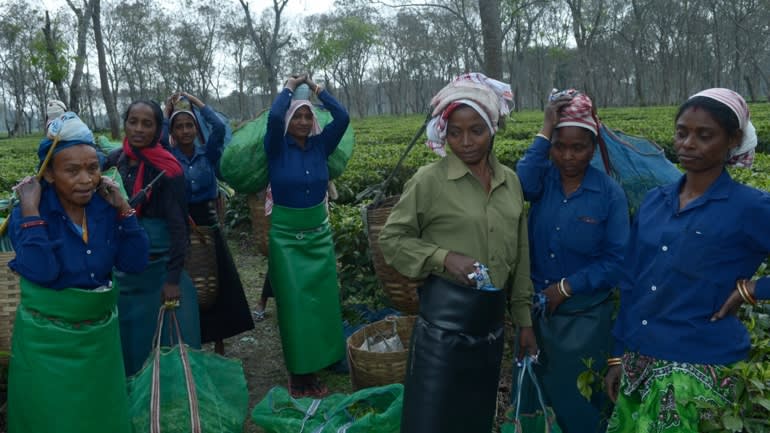 Women dominate the labor force in tea gardens, where jobs are usually handed along to next of kin. (Photo by Prakash Bhuyan)

Her doubts were not unfounded. Just weeks later, the Guwahati High Court put a stay on the interim hike after the Indian Tea Association along with 17 tea companies filed a petition. The interim order passed on Mar. 16 gave liberty to the companies to increase the hike 'as they deem proper' till the issue was decided by the court. The association on Mar. 22 released a statement agreeing to an increase of 26 rupees per day.

The wage increases have also yet to come through, according to Varia speaking the day after she collected her pay. "I got 281 rupees for two days of work this week," she said. "They have cut the remaining for provident fund and other benefits, but we don't get a receipt for that. How can we run our households?"

The 50-rupee hike has menwhile rankled tea garden owners, who consider it unreasonably high. The Assam branch of the Indian Tea Association (ABITA), which represents the interests of tea planters and estate owners, has petitioned in the Gauhati High Court against the hike. The association has been unhappy since the Minimum Wages Advisory Board was established in 2015. Before that, wages were set in bilateral consultation between the owners and the Assam Tea Workers Union.

One industry source described the wage hike to Nikkei as a "political gimmick" that could lead to the closure of many tea gardens. He said there had never been a 50-rupee increase before and it was unclear how the figure was reached. The last interim increase in 2018 was 30 rupees. Tea garden workers collect their wages on Saturdays, and also receive 2.5 kilograms of rice along with rations of flour and tea. (Photo by Prakash Bhuyan)

Tea garden expenses have risen over time, unlike tea prices. The COVID-19 pandemic forced many industry shutdowns, but the tea industry in Assam was allowed to resume three weeks after a nationwide lockdown was announced in March 2020.

Assam is the largest tea-producing region in northern India. In July, a record 3.8 million kilograms of leaf was sold at $3.65 per kg at the Guwahati Trade Auction Center, pushing up average prices.

The increase was due to a rise in demand, mostly domestic, during the lockdown that had previously created a shortage. A member of ABITA described the price spike as an "exception."

"The rates returned to their usual range in October," he said, noting that the wage increase will cost individual estates about 100 million rupees annually. According to Dinesh Bihani, secretary of the Tea Auction Buyers' Association in Guwahati, prices are currently depressed due to excess production. 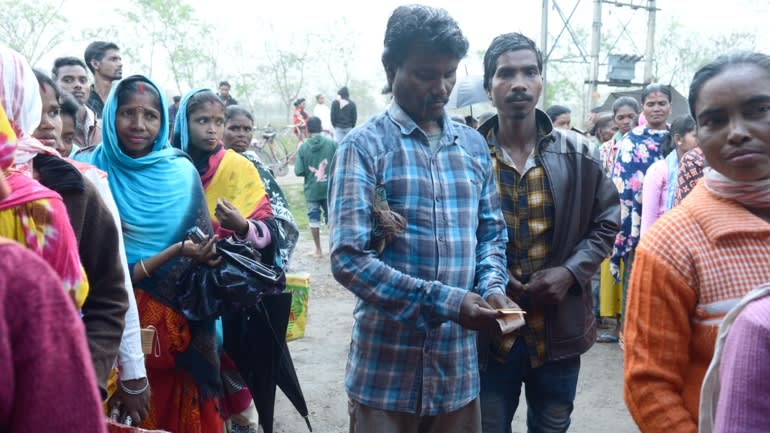 From the daily wage of 167 rupees, 33.7 rupees are cut for the provident fund, food rations, medical expenses, and other miscellaneous items charged by the plantation owners. (Photo by Prakash Bhuyan)

Government officials Nikkei contacted said that the minimum wage is not set according to the employer's ability to pay but according to how much the employee needs to get by. Outside the plantations, the state minimum daily wage for unskilled labor is 287.73 rupees, 335.69 for semi skilled or unskilled supervisory labor, and 419.63 for skilled labor -- all much higher.

Tea worker wages have been regulated separately from others since before independence from Britain in 1947.

JB Ekka, principal secretary in Assam's labor department, said the tea industry did not adhere to the minimum wages act until the advisory board was formed. "Apart from the hike, we have broken down the 'in kind' component of 101 rupees under which the employers will have to produce a pay slip," he said. About 16% of the wages are paid in kind for housing, food rations, medical expenses, fuel, firewood and a provident fund.

A government official, who did not wish to be named, told Nikkei that tea garden workers are categorized as 'unskilled' labor even though picking tea leaves is actually highly skilled.

Varla said that when wages were negotiated bilaterally, the ACMS negotiated meager increases of a few rupees. The workers would prefer to vote for a parliamentary candidate from their own community, she said, noting that Pallabl Lochan Das, the BJP member of parliament, had never raised their pay issues. The same was true of Congress, the largest opposition party.

"They completely forget about us after elections," she said.