Widodo is set to win a second five-year term in office, according to multiple quick counts that give him around 55% of the vote, compared with Subianto's 45%. This is wider than the six percentage point gap when the pair faced off for the first time in 2014.

He won there in 2014, but is set to secure an even more commanding lead on Wednesday's election with nearly 80% and 70% votes, respectively. He was helped by choice of senior cleric Ma'ruf Amin as his running mate. Amin is a leading figure in Nahdlatul Ulama, Indonesia's largest Muslim group, which represents the moderate, homegrown strain of Islam. Central and East Java are NU strongholds. Predominantly non-Muslim provinces also voted heavily in favor of Widodo. These include Bali, the Hindu-majority resort island, where Widodo is predicted to win 91% of the vote and East Nusa Tenggara, a predominantly Christian area, where he won 86%.

In stark contrast, Subianto scored big wins in the more conservative Muslim majority provinces, where Islamist groups that back him have been enjoying growing influence in recent years.

This is most evident in West Sumatra, where Subianto is forecast to gain 91% against Widodo's 9%. In Aceh, the only province that imposes Shariah law, the opposition leader secured 83% -- up from 54% in 2014. Subianto won again in West Java, the nation's most populous province, with 61%. 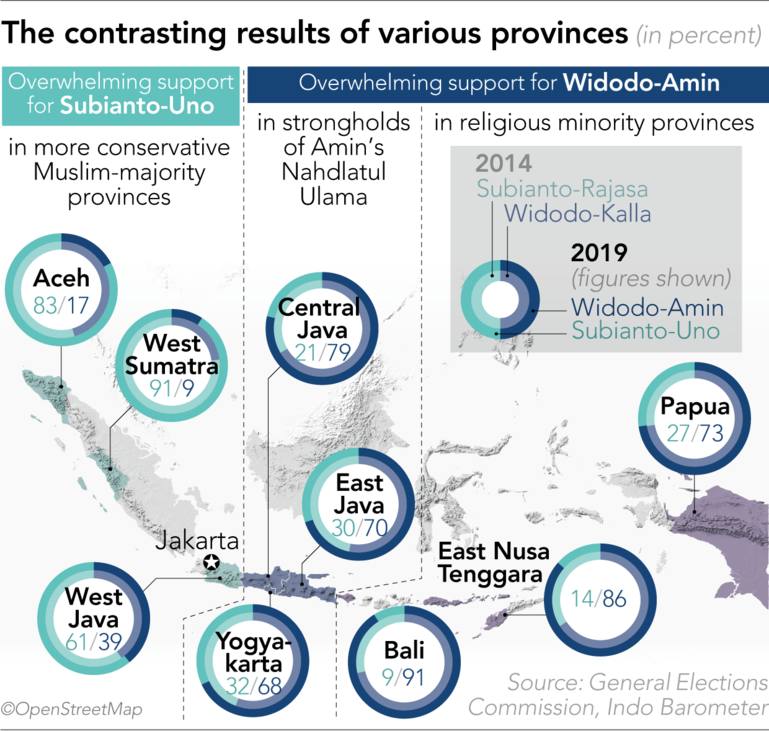 The quick counts also suggest that the pro-Widodo coalition will be able to secure a majority of seats in the House of Representatives, with PDI-P set to be the biggest party with around 20% of the vote.

This should, in theory, make it easier for Widodo to pass laws such as necessary structural reforms, but some analysts question whether the president will be able to fend off entrenched interests from his own party and other coalition partners -- a feature of his first term.

Subianto's Gerindra Party is forecast to be the second-largest party, with around 13%. It will replace Golkar, a member of the ruling coalition, whose vote was eroded after corruption cases implicated some of its lawmakers.

Widodo started off supported by a minority coalition in the House in 2014, but some opposition members switched to his side halfway through his presidency. This may happen again during his second term as Indonesian political parties are largely pragmatic. Elections of members of national and regional legislatures were held simultaneously with the presidential vote on Wednesday. The General Elections Commissions will announce the official results in the next month, with the new president to be sworn-in in October.