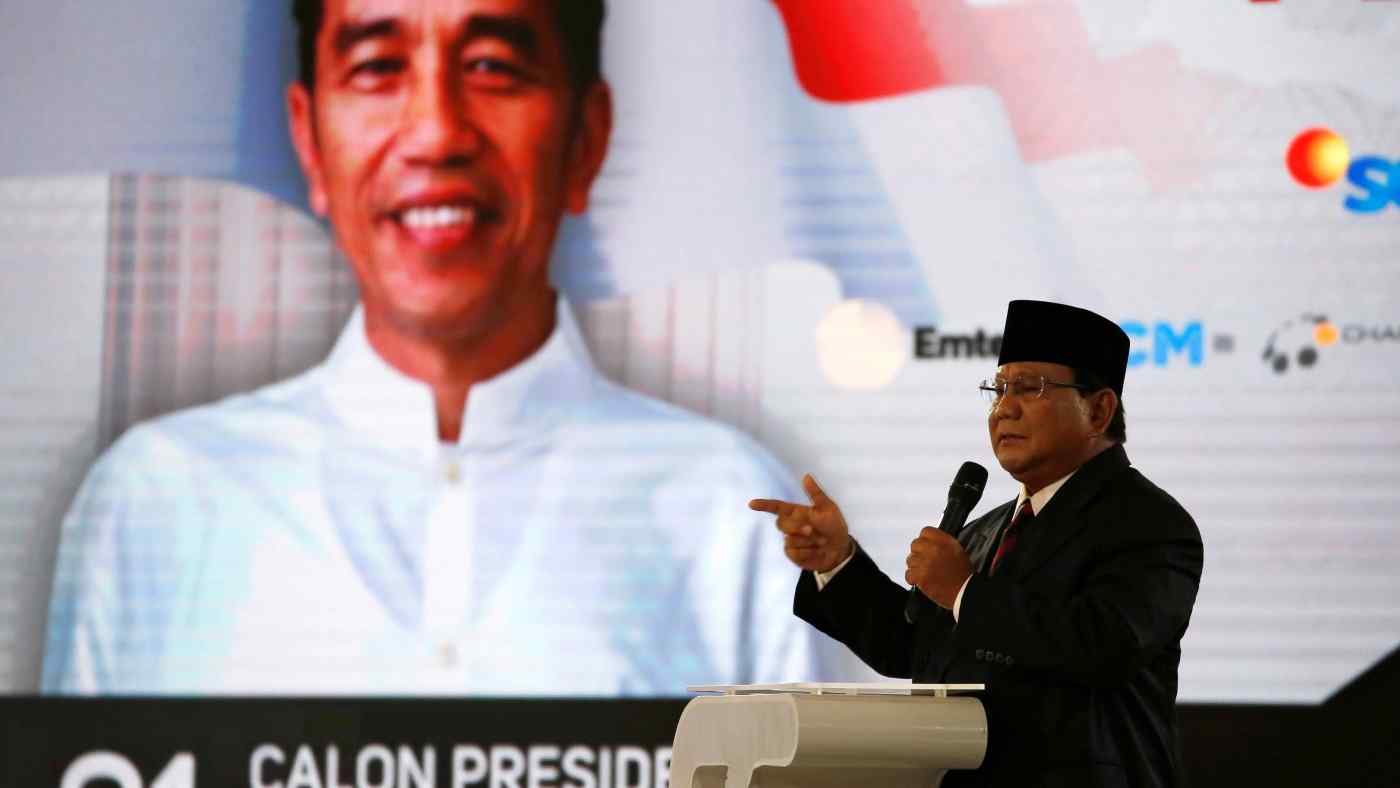 JAKARTA -- Opposition leader Prabowo Subianto lambasted President Joko Widodo, criticizing his opponent's economic diplomacy and peacemaker aspirations, while touting his own vision of building Indonesia's military might, as the two faced off in debate a few weeks ahead of the April 17 presidential vote.

"Diplomacy is not merely about playing mediator. You'll go nowhere if you only smile and play the nice guy in diplomacy," Subianto said in a fiery speech during the debate on Saturday night, where the two discussed defense and foreign policy. "Diplomacy should be part of efforts to safeguard the national interests; therefore diplomacy must be backed up by power."

Widodo, who has been wooing Muslim voters amid allegations of anti-Islam inclination, on Saturday touted his foreign policy focus that includes outreach to the Muslim world to boost trade and to increase Indonesia's international standing by helping mediate conflicts. He mentioned ongoing work to mediate conflicts in Myanmar and Afghanistan.

"Indonesia is the biggest Muslim [majority] country in the world, that is our strength; that's why I often mentioned that in international forums," Widodo said. "Due to this, we've been given trust to mediate conflicts and wars in other countries."

Subianto, however, dismissed what Widodo claimed as achievements, saying that Indonesia, the founding and largest member of the Association of Southeast Asian Nations, has not gained the respect it deserves.

"I think there is something that you don't really feel -- that we are not quite well respected outside Indonesia," Subianto said. "Foreign diplomats smile because that's part of their job ... but they have no respect for us."

The former army general said the solution is to build up Indonesia's military. He criticized the government's military spending, which totals only 5% of the national budget and 0.8% of gross domestic product, one of the lowest levels in ASEAN.

Widodo for his part said that despite the low ratio, Indonesia's military spending has been increasing, with maritime and air defense being ramped up at the country's outermost borders. Investment is also being made in the country's strategic industry to build its military independence.

The president conceded that infrastructure development is currently his top priority, with the public works ministry being the largest recipient of the state budget. But it is closely followed by the defense ministry, which will receive 108.4 trillion rupiah ($7.6 billion) this year. Indonesia is the strongest military power in ASEAN, according to the latest rankings by GlobalFirepower.

Widodo said his next focus will be human resources development, adding that Indonesia is not under any imminent foreign military threat -- and that domestic conflicts and cyber attacks pose a greater danger. This immediately drew harsh words from Subianto, who also criticized Widodo for allowing foreign investment in Indonesia's commercial ports and airports, which he called strategic assets.

"In defense and security, you cannot exclude the possibility of a war," Subianto said, repeatedly reminding the audience of his experience serving in the military. Subianto, former son-in-law of late dictator Suharto, was the army's strategic reserve commander before he was dismissed following allegations of activists being kidnapped during the 1998 riots that accompanied Suharto's stepping down after decades in power.

"Why were you briefed that Indonesia will not be under threat of invasion for the next 20 years? If I were the president, I would dismiss the person who gave that briefing. We can never know other people's intentions." He lashed out at members of the audience who appeared to be laughing, calling it no laughing matter.

Subianto has won many supporters with his tough image and a vision to return Indonesia to its past glory as the "tiger of Asia" -- before the 1997 Asian financial crisis struck, leading Suharto's New Order regime to collapse a year later.

He has been championing food and fuel resiliency and import restrictions, and attacking Widodo's infrastructure policy, blaming it for Indonesia's rising debt. But despite the strong rhetoric, observers see the two candidates' economic platforms as more or less the same.

Saturday was the first time the archrivals, who first competed in the 2014 presidential election, actually expressed contrasting views. Still, many think Subianto's fiery campaign for military strength may be just part of his rhetoric, as he offered only vague ideas on how to secure funding to boost spending -- offering "reducing leaks [in the state budget], reducing corruption and changing the system so that Indonesia's assets will not be taken away overseas."