Indonesia's Widodo has edge in bid for second presidential term

Incumbent has backing of business and media, but bribery scandal looms 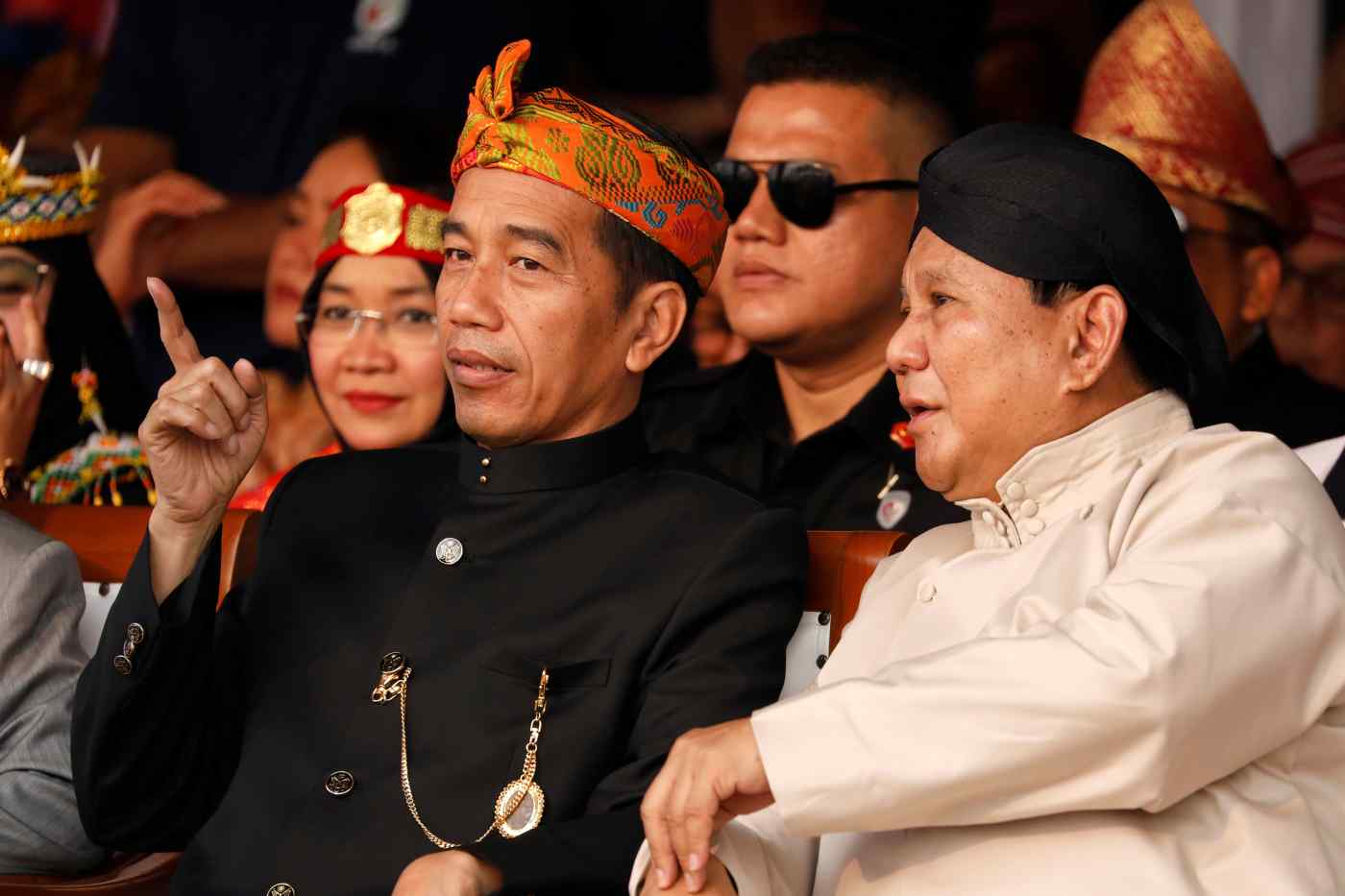 JAKARTA -- Campaigning for Indonesia's April 2019 presidential election began on Sept. 23, with the incumbent, Joko Widodo, aiming for a second term.

Preparing for the campaign, the two candidates smiled and shook hands at the election commission in central Jakarta on Sept. 21. "Let's show the maturity of our democracy for the people," said Widodo. "I hope that all the people conduct the election in a peaceful manner," said Subianto.

Widodo has the support of ruling party politicians, prominent business people and major media groups. The challenger, Prabowo Subianto, will try use his big war chest to try to gain ground. The campaign will last more than six months. Although Widodo remains popular with voters and appears to have the edge, a brewing bribery scandal related to construction of a power plant on Sumatra could dent his chances.

The contest is a rerun of the 2014 presidential election and most observers think the odds are in the incumbent's favor. According to an Aug. 12-19 survey by LSI Denny JA, Widodo and his vice presidential running mate, Ma'ruf Amin, a Muslim religious leader, have the support of 52.2% of voters. Subianto and his running mate, Sandiaga Uno, a businessman and former deputy governor of Jakarta, trail with 29.5%. "The odds of the president being re-elected remain at 70%," said U.S. think tank Eurasia Group in a report published Aug. 10.

Unlike in 2014, Widodo has the support of Indonesia's media moguls. In the previous election they were split, with backers of Subianto and Widodo clashing repeatedly. Now they largely favor the incumbent.

For example, Perindo, a political party led by Hary Tanoesoedibjo, owner of media company MNC Group, has thrown its weight behind Widodo. MNC owns the RCTI TV network and Koran Sindo, an influential newspaper. In 2014, the party supported Subianto, throwing up a roadblock for Widodo. 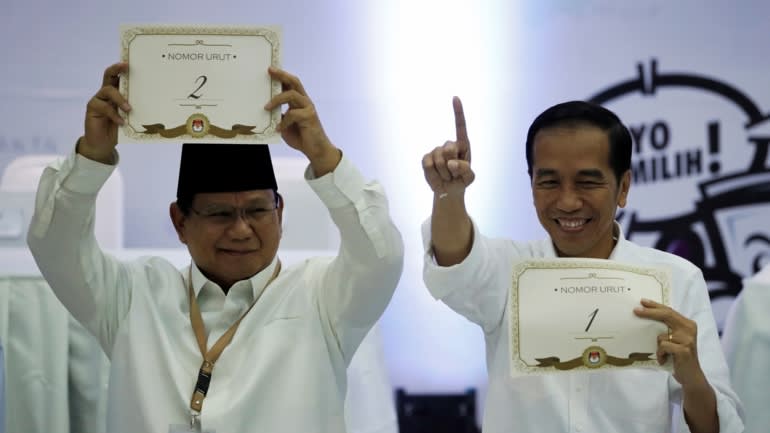 Indonesian President Joko Widodo, right, and his opponent in next year's presidential election, Prabowo Subianto, hold up their ballot numbers at the election commission in Jakarta on Sept. 21.   © Reuters

Another backer is Erick Thohir, founder of Mahaka Media, a big advertising company that controls the influential Islamic newspaper Republika and other media units. During the previous campaign, TVOne, a station owned by an executive of the Golkar Party, a member of the ruling coalition, featured favorable coverage of Subianto; now it is staying neutral.

Subianto's team will be leaning heavily on the personal fortunes of the candidates themselves to get their message out. Subianto and Sandiaga are worth 7 trillion rupiah ($476 million) between them, more than 110 times as much as Widodo and Ma'ruf's 60 billion rupiah, according to financial filings with the Corruption Eradication Commission.

Sandiaga is particularly wealthy, with assets of more than 5 trillion rupiah. He is the founder of the Saratoga Investama Sedaya investment company and its biggest shareholder, with a stake of about 27%. He will use some of that money to buy TV commercials and a social media presence.

Subianto, with his military background, may benefit from the support of Indonesia's elite. The former special forces commander has appointed many military officers as campaign executives, including campaign chief Djoko Santoso, former commander of the Indonesian National Armed Forces. Tommy Suharto, son of the late President Suharto, and former President Susilo Bambang Yudhoyono are also among his campaign team, a move intended to garner elite backing.

Indonesia has around 187 million voters. All citizens aged 17 and older may cast ballots. Married people of any age are eligible to vote as well.

Among the concerns for the Widodo government is a corruption scandal. In late August, the KPK, an independent anti-corruption watchdog, named Social Affairs Minister Idrus Marham as a suspect in a bribery investigation over construction of a $900 million power plant in Sumatra's Riau Province. Marham has stepped down from his cabinet and Golkar Party posts, but Widodo's first cabinet-level corruption scandal will give the opposition ammunition to attack the president, who trades heavily on his reputation for probity.

Adding to Widodo's troubles, KPK investigators arrested lawmaker Eni Saragih, also of Golkar, as she was in the act of accepting cash from a construction contractor at Marham's home. A subsequent search deepened suspicions that Marham was involved, according to media reports. The KPK believes Saragih received payments worth 4.8 billion rupiah ($320,000).

The power plant is part of a larger 5 quadrillion rupiah ($337 billion) infrastructure development program. The plant was to be a joint venture between state-owned utility PLN and private companies, who were selected without competitive bidding. The KPK suspects the construction companies transferred the money to a lawmaker familiar with the energy industry in return for the contract.

KPK has been investigating PLN executives since late August, including Sofyan Basir, PLN's president, who pushed ahead with the power plant project in response to government pressure. Sofyan denies the bribery allegations, saying his company had nothing to do with the scandal. It is unclear how far it may reach into the ruling coalition's leadership.

Widodo received strong popular support in 2014 by pledging to fight corruption. He cuts a frugal figure and has not been hurt by the revelations so far. His approval rating remains at just over 50%. But if the scandal spreads to senior officials and state company executives in charge of the infrastructure-building program, Widodo's path to a second term will become rougher.