JAKARTA -- President Joko "Jokowi" Widodo on Tuesday said the government will proceed with its $32 billion plan to relocate Indonesia's capital city from Jakarta to the island of Borneo, while the strongest candidate to succeed him so far assured he supports the move.

With Widodo now in his second and final term, the announcement shows a renewed push for the relocation plan, a proposed solution to Jakarta's overcrowding, pollution and flood risk.

Not only is it the first toll road in Kalimantan, the Indonesian part of Borneo island, but it also provides access to the planned site for Indonesia's new capital in a now-forested area.

"To build a new capital city, the most important aspect is infrastructure access to the area to deliver logistics," Widodo said in a speech broadcast on YouTube. "We're inspecting the site to see in detail where [we can build] the port, airport, etc., which means that the new capital city plan is still on." 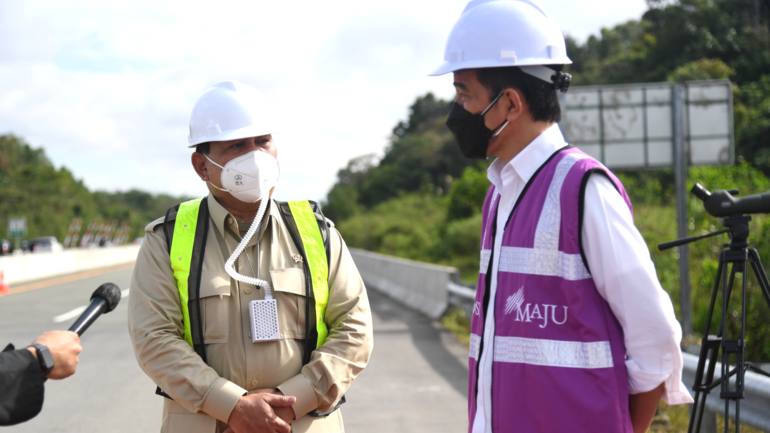 Shortly after his reelection in 2019, Widodo announced a 466 trillion rupiah ($32.3 billion) plan to move Indonesia's administrative capital to East Kalimantan, citing Jakarta's chronic traffic and sinking foundations, as well as the need to spur economic activities and growth in the eastern half of Indonesia. Jakarta will remain as the country's financial and commercial hub.

But the plan took a back seat during the COVID-19 pandemic as the government reallocated much of the budget and its attention to tackling the country's health crisis and its impact on Southeast Asia's largest economy.

Shortly before the pandemic, the project had attracted the likes of SoftBank Group CEO Masayoshi Son, former British Prime Minister Tony Blair and Abu Dhabi Crown Prince Mohammed bin Zayed Al Nahyan. There has been no mention of their involvement since.

Now, the relocation has taken on a new sense of urgency. Environmental group Greenpeace in its June report warned that Jakarta faces a "dual threat" from both rising oceans and sinking ground, with 17% of the city's land area projected to be under sea level by 2030.

A more recent article published on architecture website Rethinking The Future confirmed what Jakarta residents already know: Southeast Asia's biggest metropolis, with a population of about 11 million, is "a chronically congested capital city that is choking on fumes and drowning in polluted water." The article also calls Jakarta the "worst-designed place" on the planet.

But the pandemic-driven delays have raised doubts over whether Widodo will be able to lay enough groundwork for the capital city project to progress and begin the capital move before the end of his tenure in October 2024.

Another important question is whether his successor will carry on with the project. Defense Minister Prabowo Subianto, who was Widodo's archrival in the 2014 and 2019 elections before he joined the cabinet, has consistently led voter surveys of likely candidates for Indonesia's next president over the past two years.

On Tuesday, Subianto said he supported the relocation plan while accompanying Widodo on the site inspection.

"I offered advice to the president that this is a strategic plan and we have to have bravery to move the capital," Subianto said.

"I think it is very well planned already, with many [relevant] studies conducted," the former army general said. "I'm very supportive and told the president we have to continue with it."