Indonesia's presidential race heats up ahead of first debate

JAKARTA -- Incumbent Joko Widodo will face his only challenger for the Indonesian presidency, former Army general Prabowo Subianto, on Thursday in the first televised debate ahead of elections on April 17.

The debate marks the start of full-fledged campaigning, but the candidates have already traded barbs as they outlined their campaign platforms in recent weeks.

As many as 192 million Indonesians -- approximately 70% of the population -- are registered to vote in elections for the presidency, vice presidency and membership of the legislature.

Subianto has consistently criticized the current administration, citing poverty, inequality and foreign debt. Recent speeches have included claims that the country is being managed so badly that it will collapse within ten years.

He has set out a vision for a "Victorious Indonesia" and a "Big Push Strategy" to realize self-sufficiency in the food and energy sectors, while also promising better welfare for anyone -- from teachers and motorbike taxi drivers to police officers and soldiers.

"We will also ensure that our important state-owned enterprises ... will be strong enough to be profitable for the country. We do not want to be at the bottom of the pyramid anymore," Subianto said on Monday to members of four political parties that are backing him. "We want our children to be pilots, shipmen, entrepreneurs ... [instead of being] enslaved by other nations."

Widodo sounded equally fired up as he countered criticism of his leadership on Wednesday. "Don't be pessimistic. Indeed there are many things that have yet to run well, but we have to be optimistic," he said. "We have to fix them ... That is our job."

Widodo also hit back against negative campaigning alluding to his alleged involvement with foreign companies in developing the country's natural resources.

"[I've been] rumored to be a foreign agent," he told supporters in Jakarta over the weekend. "I want to tell you, the Mahakam Block is now 100% managed by Pertamina," he said, referring to a major gas block that the state-owned oil and gas company took over last year from Japanese and French companies. Tens of thousands of Indonesian Muslims attend a rally to commemorate a series of rallies held in late 2016 targeting the city's former Christian governor Basuki Tjahaja Purnama, in Jakarta on Dec. 2, 2018.   © Reuters

In an apparent counter to Subianto's claim, the president also mentioned state-owned mining company Inalum's takeover of a majority stake in Freeport Indonesia, the local unit of U.S. miner Freeport-McMoRan, in December.

Beyond the rhetoric, however, the platforms that the two camps presented to the General Elections Commission do not differ greatly. Both sides are campaigning for bureaucratic reforms, infrastructure development and improved connectivity among Indonesia's sprawling islands. In addition, both have earmarked tourism, digitization and the Islamic economy as potential new sources of growth.

The two candidates, who also faced off in the 2014 election, will take part in three more televised debates between February and April after Thursday's contest. Their running mates, well-known Muslim cleric Ma'ruf Amin for Widodo and businessman Sandiaga Uno for Subianto, will square off on March 17.

Despite Widodo's choice of Amin as his running mate, the Subianto camp seems to be playing to voters' religious beliefs. Amin, leader of the Indonesian Ulema Council, has had his scholarly credentials questioned on social media, even though the council issued an edict that helped drive from office then Jakarta Governor Basuki Tjahaja Purnama, a key Widodo ally. 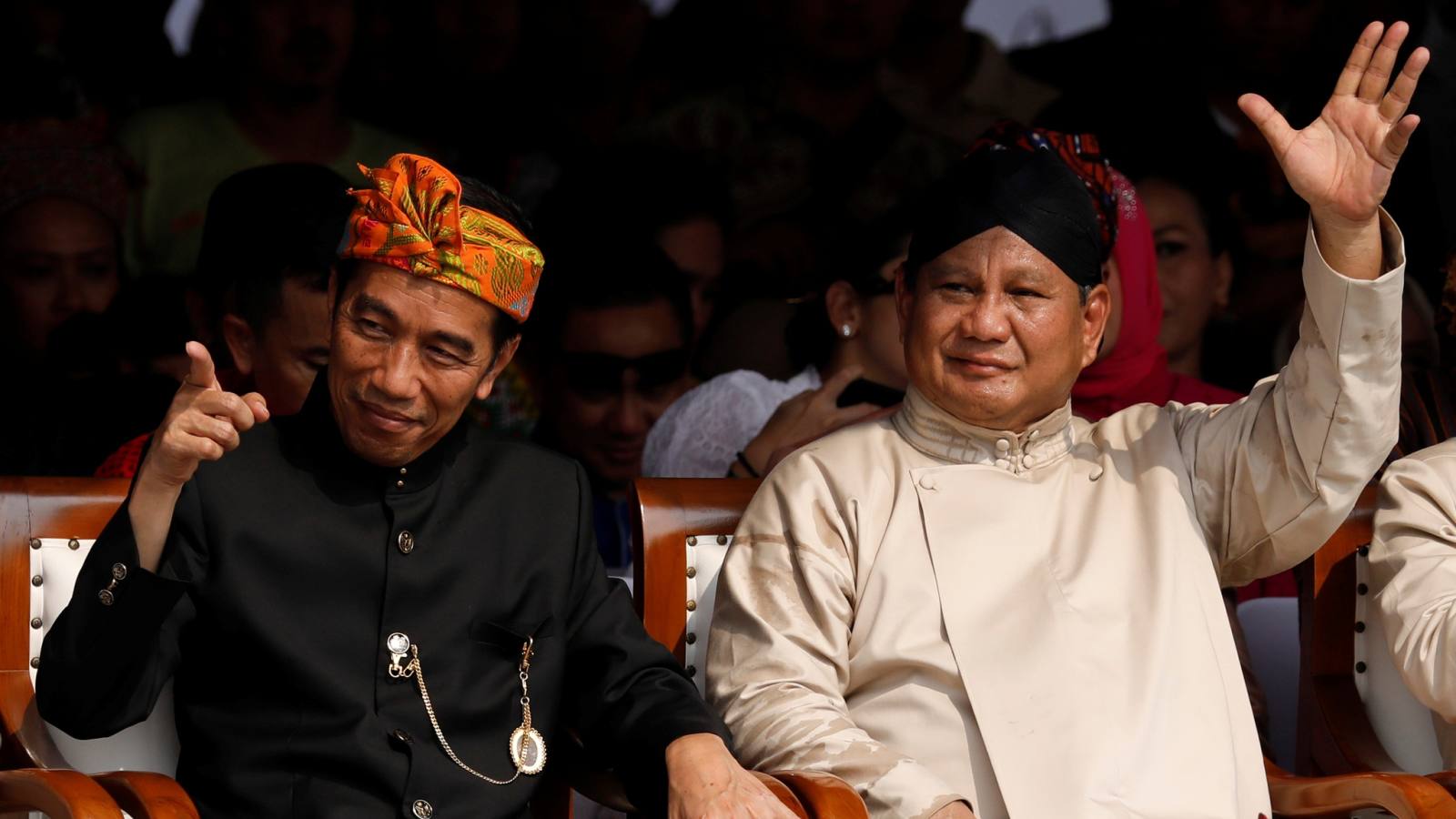 Incumbents fight to keep power in series of 2019 Asia elections

Why Indonesia is on the brink -- again

The edict, which accused the former Christian governor of blasphemy, fomented huge Muslim rallies in late 2016 that led to Purnama's eventual incarceration and the victory of the opposition candidate in the election to fill the vacated governor's office.

The opposition is now lashing out at the Widodo administration for arresting several rally leaders. "We will ensure that [Islamic scholars] will be respected and free from threats of incrimination," Subianto said during Monday's speech. "This is very crucial, given the important roles [the scholars] play in our nation's independence."

Although in agreement with the president over the importance of developing public transport and inter-island connectivity, Subianto attacked Widodo's infrastructure spending, blaming him for increasing debts at a string of state-owned companies.

"[This is] a country that has put our main SOEs in very difficult financial conditions," said Subianto, former son-in-law of the late Suharto. "Even if the SOEs are profitable, they are not profitable enough."

Last year's weakening of the rupiah has also come under attack by the opposition, and some 2018 polls suggest Uno's cross-country campaign speeches promising more jobs and better government benefits may swing some undecided voters. But with the rupiah strengthening against the dollar in recent weeks, observers wonder whether these tactics will still work.

Adam Kamil, an analyst at Indikator Politik Indonesia, doubts that the debates will sway many voters. A survey run by the pollster in December, showed Widodo maintaining a lead of 55% to 35% over his rival.

"[Indonesian] voters generally have less interest in political and governance," Kamil said. "Events like presidential debates may be very attractive to more militant [voters] ... but that also may not result in changing of preferences. They tend to be polarized already toward one or the other ticket."