MEDAN, Indonesia -- The arrests of a senior member of Indonesia's top Islamic clerical body and the chairman of an Indonesian political party last week cast a new light on the most notorious terrorist group in Southeast Asia: Jemaah Islamiyah (JI).

Among the arrested was Ahmad Zain An-Najah, a member of the fatwa commission of Majelis Ulama Indonesia (MUI), or Indonesia Ulema Council -- the top Islamic clerical body in the country. The fatwa commission issues edicts, or legally nonbinding pronouncements on Islamic law.

An-Najah was arrested by the elite counterterrorism squad Densus 88 along with associates Farid Okbah, who co-founded the People's Da'wah Party, and Anung al-Hamad. The three are alleged to have raised funds for JI, which was responsible for the 2002 Bali Bombing in the beach resort of Kuta that killed over 200 people.

Following the arrests on Wednesday, police said An-Najah was a board member of an Islamic charity that was used to raise funds for JI; they also said An-Najah sits on the board of the MUI fatwa commission.

The head of the MUI, Abdullah Djaidi, said in a local media report after the arrests that An-Najah had been suspended pending a legal verdict. "This is so that he doesn't tarnish MUI's good name," he said, stressing that "the MUI promotes a moderate understanding of Islam."

JI was officially founded in 1993 in Malaysia by hard-line scholars Abu Bakar Bashir and Abdullah Sungkar. The group, which currently counts over 1,600 active members, according to the Indonesian authorities, is a close ally of al-Qaida; funding for the 2002 Bali Bombing was directly provided by Osama bin Laden.

JI has long been considered one of the most prominent and deadly terrorist organizations in Southeast Asia. It was involved in a string of attacks in the early 2000s, including one on the Jakarta Stock Exchange, Christmas Eve church bombings in 2000 and the Bali Bombings in 2002 and 2005. In 2003, the group attacked the JW Marriott Hotel in Jakarta, killing 12 and injuring over 150.

In 2004, the MUI issued a fatwa banning terrorism and terrorist activities, following a spate of attacks by JI in the early 2000s.

Since the arrests, the People's Da'wah Party, co-founded by Farid Okbah in May, has also come under scrutiny, with Indonesian police saying it too operates as a front for JI. Late last year, Indonesian police seized over 20,000 charity donation boxes that are thought to have raked in millions of rupiah (1 million rupiah come to about $70) per day for the organization. Some of the money financed weapons workshops and paid for cadres to receive military training in places like Syria and Afghanistan, according to a spokesperson to National Police Chief Argo Yuwono. The activity has prompted fears that the group is on the cusp of a violent resurgence.

In August, JI members were among 53 suspected militants who were arrested for allegedly planning attacks ahead of Indonesia's Independence Day.

Despite this, former members say there needs to be a more nuanced understanding of the group's myriad activities and rebranding since the 2002 Bali bombing.

Arif Budi Setyawan, a former JI cadre who served a three-year prison sentence for terrorism-related activities, said he was "shocked" by the arrests, "even though it is common knowledge that JI prepares its cadres to participate in various movements and organizations among the general populace.

"But as far as I was aware, those involved in organizations like the MUI were not [directly] involved in any of JI's field activities, such as fundraising or anything that would concern perceived elements of 'jihad.'"

In recent years, members of the group have publicly sought to distance the organization from the terrorism it carried out in the early 2000s, Setyawan said, and have focused instead on building educational institutions such as Islamic boarding schools and NGOs that focus on da'wah, or missionary work.

"JI is not just a 'jihadist' movement but also a social movement, which is one way of attracting sympathizers," Setyawan said. "After all, it is always a mistake to get involved in helping with fundraising for JI. Because, whatever position you may do this in, you'll end up getting arrested by the police [on terrorism allegations]." 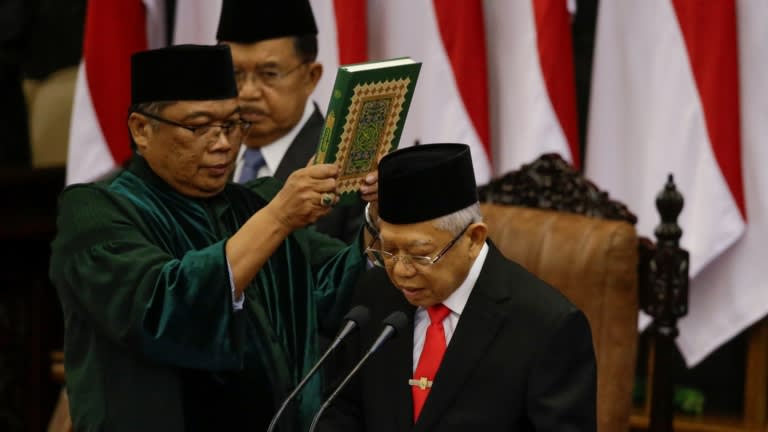 Ma'ruf Amin, then the chairman of Indonesian Ulema Council, is sworn in as Vice President, in Jakarta, on Oct. 20, 2019.   © Reuters

The arrests of the MUI member and other clerics raise political questions. Indonesian Vice President Ma'ruf Amin was the head of the MUI until last November and currently chairs its Advisory Council. Many Indonesians now wonder how Amin will handle the arrests and any potential backlash.

"There should not be any political impact because this is purely a law enforcement issue based on evidence," an Indonesian senior official with knowledge of the case told Nikkei Asia. "However, it could be politicized, so we need transparency and accountability during the legal process by the Indonesian National Police."

Ustadz Martono, chairman of the United Indonesia Diversity Forum, agreed that the political impact on Ma'ruf Amin should not be sensationalized, although he said he was "extremely surprised that the MUI was not more selective in the recruitment of its members."

"If anything, this shows that Ma'ruf Amin is an objective party and that this should be left to law enforcement," the diversity forum's chairman said. "Internally, in the future, there needs to be an evaluation of how members are recruited. This is an opportunity for him to make internal corrections within the MUI."

The arrests have also prompted calls for the organization to be disbanded. On Twitter, the hashtag #bubarkanMUI recently trended.

According to Ian Wilson, a lecturer in politics and security studies at Murdoch University in Perth, Australia, "The arrests arguably damage the credibility of the MUI and are likely to result in increased scrutiny of its composition and the ideological and religious orientation of its members.

"The MUI has, over the past two decades, had a close working relationship with a number of hard-line groups, including the Islamic Defenders Front (FPI), the Indonesian Mujahedeen Council (MMI) and Hizbut Tahrir Indonesia (HTI)."

A senior Indonesian political source, speaking on condition of anonymity due to the sensitive nature of the case, told Nikkei Asia that the infiltration of the organization by JI members is not particularly surprising. The MUI was founded in 1975 during Suharto's New Order Regime to act as a conduit between the central government and Muslim groups.

"The MUI is an organization that is representative of different Islamic groups in Indonesia," he said. "It is made up of some moderate organizations while others tend to be more hard-line and conservative."