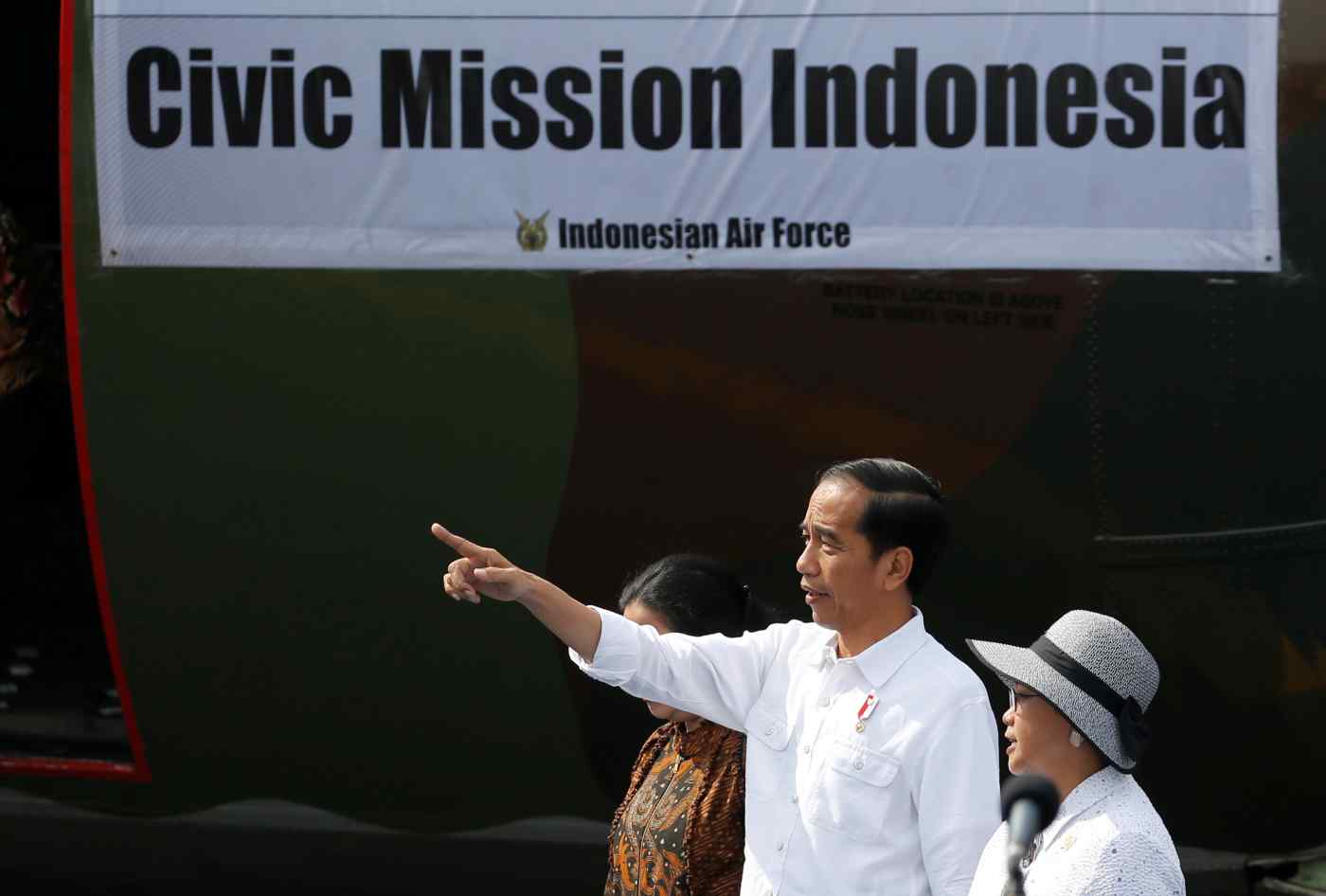 In a world where ideals and principles are being eclipsed and eroded by the rise of populism and new geopolitical tensions, Indonesia is stepping forward with a foreign policy that seeks to redress the balance. In a broad-ranging statement delivered in early January, Indonesian Foreign Minister Retno Marsudi unveiled a policy committed not just to a better Indonesia, but to a better world, describing Indonesia, the fourth most populous country in the world, as a "true partner for world peace, security and prosperity."

Reflecting on the past year, Retno detailed efforts to address humanitarian crises and contribute to peace processes both in its neighborhood and the wider world. These initiatives ranged from addressing the humanitarian crisis in Myanmar's troubled Rakhine State, support for the peace process in Afghanistan, and advocating for the rights of Palestinians. In all these cases, Indonesia has sought to mix assertive diplomacy with modest economic aid and development assistance.

Indonesia has also over the past year mobilized efforts to address sources of insecurity in Southeast Asia. Retno spearheaded the establishment of a trilateral framework for security cooperation aimed at preventing Islamic extremists from establishing a beachhead in the southern Philippines. In addition to enhanced cooperation between security forces of Indonesia, Malaysia and the Philippines, Indonesia has offered to help counter radicalism and extremism in the region by sharing its approach to Islamic education.

Indonesia also stepped up efforts to address maritime security, putting considerable energy into its chairmanship of the Indian Ocean Rim Association -- comprising 21 member states and negotiations with regional governments for a Code of Conduct in the South China Sea.

Significantly, Retno signaled that the coming year would see Indonesia "enhance its peace and humanitarian diplomacy." And to this end, she announced the creation of a new international aid agency with an initial budget of $70 million.

What does this mean? How effective can Indonesia, which is still struggling to fully develop its economy, be as a force for the good in an increasingly polarized and unsettled world, especially when the U.S, the traditional standard-bearer of peace diplomacy, is cutting its commitments under President Donald Trump?

First, Indonesia's "new" foreign policy activism is not a radical departure; it has deep roots in the forging of the Indonesian nation in the 1950s. Writing in the U.S. journal "Foreign Affairs" in 1953, Indonesia's founding Vice President Muhammad Hatta described a foreign policy that would be both active and independent -- meaning non-aligned, but also campaigning to "strengthen principles of international law and to aid in achieving social justice on an international scale."

In this spirit, founding President Sukarno was given to showy displays of activism; the 1955 Asia-Africa Conference held in Bandung aimed to establish a platform for the developing world. His successor, Suharto, set new priorities for national resilience with a focus on domestic and regional security. Suharto's persuasive and energetic foreign minister Ali Alatas presided over efforts to mediate a peace agreement between warring Cambodian factions that led to the 1991 Paris Peace Agreement. In 1996 Indonesia brokered an agreement to end decades of conflict in Muslim Mindanao.

Following the democratic transition in 1998, Indonesia adopted what Lina Alexandra, a researcher at the Centre for Strategic and International Studies in Jakarta, describes as a "soft power approach," adding a new element to its international advocacy: that of sharing the experiences of democratic transition. One of the strengths of Indonesia's approach is that it can share some bad experiences the country has learned from, for example, the role of its military in East Timor and Aceh in the 1990s.

Modest as these initiatives were, they have helped fashion a respectable image for Indonesia as a proponent of reform and third-party facilitation. In an era where advocacy or intervention from Western countries is either missing or rejected, Indonesia is filling a part of the void. Indonesia, with its own recent history of religious conflict, has also proved a useful context to help polarized communities in Myanmar learn about mechanisms for promoting tolerance.

There were concerns that with the election of President Joko Widodo in 2014, Indonesian foreign policy would abandon its advocacy and adventurism for more conventional and self-interested economic reasons. Widodo has made foreign investment and trade a priority of all his forays overseas. But this has not been the case, in part because Indonesian international activism also helps address increasingly important issues on the national agenda.

Indonesia's response to Myanmar's Rakhine crisis, which saw more than 650,000 stateless Rohingya Muslims cross into neighboring Bangladesh amid a military crackdown following attacks by Rohingya militants on security facilities, is a case in point. Soon after earlier bouts of communal violence between Buddhist and Muslim communities, Indonesia sent teams to offer humanitarian assistance; Indonesia is building schools, a hospital and a market in the troubled state. As violence intensified toward the end of 2016, Foreign Minister Retno flew to Naypyitaw to speak directly with State Counsellor Aung San Suu Kyi. She also tried to broker better relations between Myanmar and Bangladesh, shuttling between the two capitals.

Indonesia's acute concern is rooted in fears that communal violence in Myanmar could exacerbate religious tensions at home. The Widodo administration is struggling to contain the influence of hardline Islamic extremists on domestic politics. These groups notably called for firm action against Myanmar amid the Rohingya exodus last year. As Retno stated in her policy speech: "Instability in one country might well induce regional instability."

Critics say that Indonesia has neither the resources nor necessarily the geopolitical clout to become an effective force for peace in the wider world. Pushing for the rights of Palestinians or for de-escalation of tensions between Saudi Arabia and Iran makes sense on one level, since Indonesia hosts the largest Sunni Muslim population in the world. But Indonesia is dependent on oil imports and, as the single largest contributor of Muslim pilgrims, beholden to Saudi Arabia's determination of the national quotas for the numbers permitted to join the vast annual pilgrimage to Mecca.

Closer to home there is some unease among fellow member states of the Association of Southeast Asian Nations, which worry that Indonesian activism is eroding the regional group's bedrock principles of non-interference. Indonesia spearheaded support for the establishment of an ASEAN Institute of Peace and Reconciliation, but other members states have dragged their feet on activating the institute, which they fear will seek to get involved in regional disputes.

But equally, Indonesia is increasingly finding itself called on by other regional players to act in the absence of others -- as well as to counterbalance the impact of larger powers. The U.S. and the European Union have encouraged Indonesia to go out and share its experiences of transition. Jakarta has also responded to calls as a medium-sized power to play a more muscular role in the "Indo-Pacific region" -- in other words to help balance the rise of China.

This makes Indonesia the obvious channel of ASEAN influence through which to shore up Myanmar's troubled transition and address communal tensions. It also makes Indonesia the most effective advocate of a transparent regime for managing maritime tensions in the South China Sea.

Meanwhile, at home, there are pressure groups who want to channel Indonesia's humanitarian activism increasingly toward Islamic causes. And as elections approach in 2019, there will be pressure to show what the promotion of human rights and democracy abroad delivers for the Indonesian citizen at home. The challenge for Widodo, and specifically for Foreign Minister Retno and her team, is to manage varying -- and sometimes conflicting -- expectations.

Michael Vatikiotis is Asia director of the Centre for Humanitarian Dialogue.