Threat from international terrorism also behind shift from army dominance 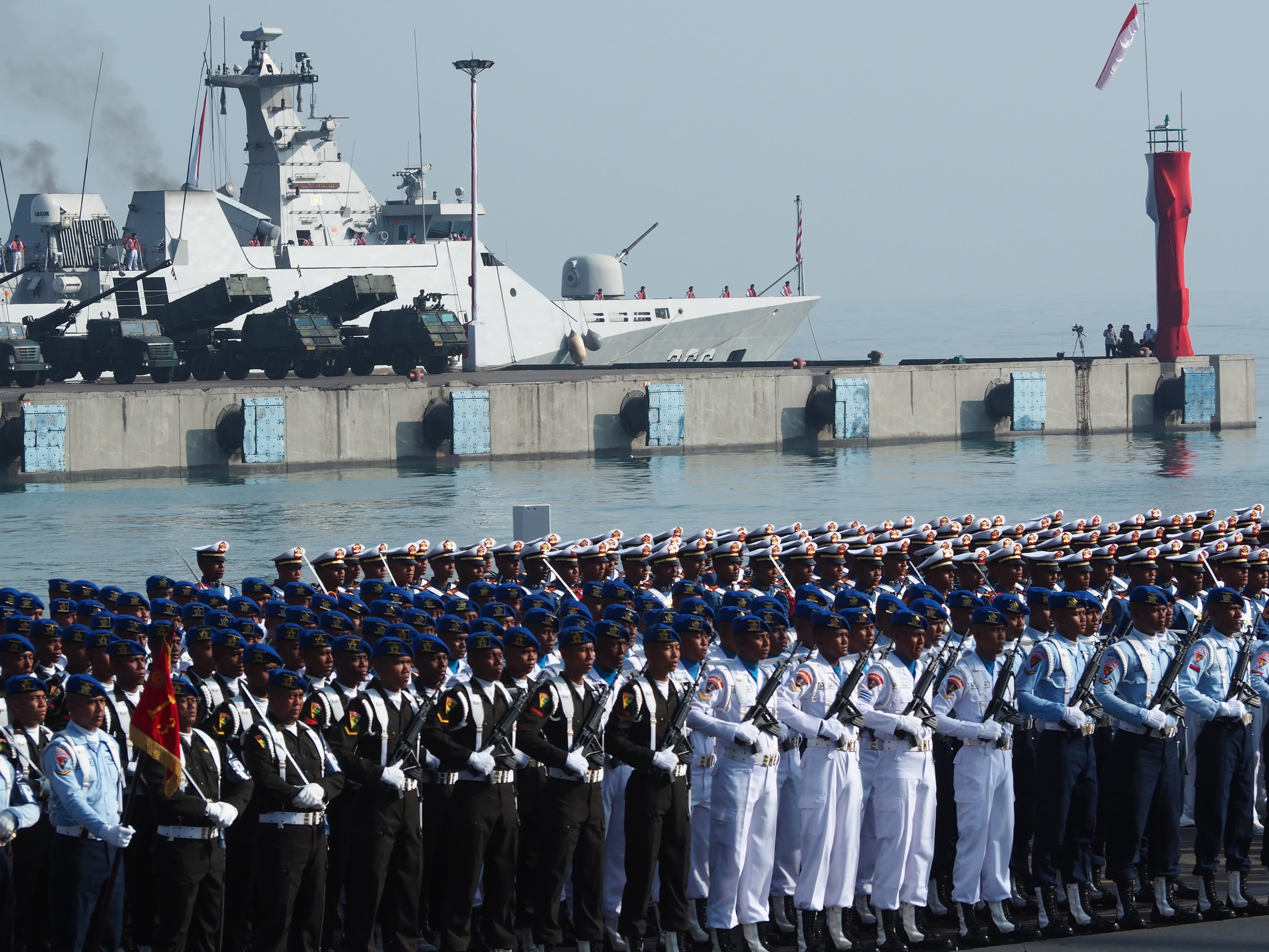 JAKARTA -- Amid a rapidly changing regional security environment, Indonesia, one of the most powerful military countries in Southeast Asia, has drastically shifted the main focus of its defense strategy.

Having been dominated by the army for decades, the Indonesian National Armed Forces' air and marine defenses are now being strengthened in response to Beijing's push into the South China Sea and the growing threat posed by cross-border terrorism.

On Thursday, the National Armed Forces held a parade marking their 72nd anniversary at the port of Cilegon in Banten Province on the western tip of Java. Taking center stage was the diesel-electric attack submarine KRI Nagapasa-403, the country's third sub.

An Apache Guardian attack helicopter, due to be supplied to the armed forces, was another piece of state-of-the-art equipment on display. The new helicopter will also be used for counter-piracy operations, according to a military officer. Demonstration flights of F-16 and SU-30 fighters were also performed in an event designed to showcase the country's developing air and marine defense capabilities. President Joko Widodo said, "The Indonesian Armed Forces will be the strongest and best equipped military in Southeast Asia."

Since declaring independence in 1945, Indonesia has largely managed to avoid full-scale conflict with another country -- the only exception other than the struggle against Dutch colonial rule was a brief confrontation with Malaysia during the years under Sukarno, the country's first president.

The country has, however, often relied on the army to keep the peace domestically and quell secessionist movements. Troops have been sent to put down pro-independence uprisings in Aceh in northern Sumatra as well as on the western part of New Guinea Island that belongs to Indonesia.

The circumstances, along with resistance leader Sudirman exerting his influence as the first commander-in-chief of the Indonesian Armed Forces, have meant the navy and air force have played second fiddle in the Indonesian military since independence.

Today, the army accounts for nearly 80% of the country's 400,000 military personnel.

Widodo, however, has an altogether different strategic vision for the armed forces. To achieve his goal of developing the country into a regional maritime hub, he first needs to protect Indonesia's maritime sovereignty by strengthening air and naval defenses. The diesel-electric attack submarine KRI Nagapasa-403 is seen at the port of Cilegon in Banten Province on the western tip of Java on Oct. 5. (Photo by Jun Suzuki)

Dramatic changes in the regional security environment are the major reason behind the air and naval buildup.

Indonesia is directly affected by Beijing's expansionist activity in the disputed South China Sea, where it uses its unilaterally declared "Nine Dash Line" to justify maritime claims to much of the area.

In 2016, when Indonesian authorities sought to detain a Chinese boat caught illegally fishing within the country's claimed exclusive economic zone near the Natuna Islands, the Chinese coast guard commandeered the vessel away from the area.

Widodo's administration has taken measures to respond to China's growing assertiveness; a submarine base has been built and an airport runway upgraded in the Natuna Islands.

The country's military also faces nontraditional security threats in the form of international terrorism. The Indonesian province of North Sulawesi lies only 300km away from the southern Philippine island of Mindanao, which has been plagued by armed militants pledging loyalty to the Islamic State group.

Eliminating cross-border terrorism is the most urgent security priority for the region.

In June this year, Indonesia, the Philippines and Malaysia launched joint patrols in waters off Mindanao. The three countries are said to be examining the possibility of joint aerial patrols, although constitutional restraints on such activity in the Philippines make that a more complex proposition.

According to the Stockholm International Peace Research Institute, Indonesia's military expenditure in real terms in 2016 had almost doubled from the 2010 level, although the military budget last year comprised a mere 0.9% of the country's gross domestic product. Many senior officers are keen to see a further increase in military spending, with plans in place for the deployment of high-performance radar systems and the building and upgrading of patrol vessels.

Defending an archipelago that stretches 5,000km from east to west is a monumental, if not impossible, task. But the new geopolitical reality means the country has no choice but to make a long-term commitment to stepping up air and naval strength.