There is widespread consensus in the government of Japanese Prime Minister Shinzo Abe that relations with Seoul are unlikely to improve while President Moon Jae-in remains in office.   © Reuters
Inside Japanese politics

Instead, Seoul will send Prime Minister Lee Nak-yon, a Japan specialist fluent in Japanese, to the once-in-a-generation event on Tuesday. The Japanese government expects dignitaries from 160 to 170 countries.

Bilateral relations have soured since summer, when Japan tightened export controls of chemicals crucial to the production of semiconductors and display panels. The move is widely believed to have been sparked by a Supreme Court decision in South Korea that ordered a Japanese company to pay reparations to four wartime laborers. Tokyo sees the ruling as a challenge to the 1965 treaty that normalized relations.

A series of boycotts and tit-for-tat escalations followed Japan's move, leaving the relationship at its most tenuous point in decades.

Now Moon is looking to stem sliding approval ratings and fend off criticism from political opponents over the deteriorating relationship with Japan. A South Korean government official said Seoul hopes that Lee's visit will help improve relations and foster dialogue, according to Reuters.

But Tokyo's faith in the Moon administration has completely eroded. There is widespread consensus within the Japanese government that relations are unlikely to improve while Moon remains in office.

That sentiment extends to the very top.

Japanese Prime Minister Shinzo Abe has told people close to him that he does not believe relations will improve for at least the next five years, and Japan should focus on diplomacy elsewhere, "instead of wasting effort with a country that can't be trusted." South Korea is looking for a resolution to the impasse. The ambassador to Japan said in an interview with Nikkei that South Korea would enter talks without preconditions and signaled a willingness to consider monetary contributions by Seoul.

Moon had indicated he wanted to settle the dispute as early as mid-August.

"If Japan comes to the path of dialogue and cooperation, we will gladly join hands," he said in an Aug. 15 speech in Seoul to mark the 74th anniversary of the end of Japan's occupation of the Korean Peninsula.

But a week later South Korea announced it would not renew the General Security of Military Information Agreement, an intelligence-sharing pact.

Asked why, Kim Hyun-chong, an official at the National Security Office, told reporters "Japan did not show any response and even failed to show any appreciation for this gesture," referring to Moon's speech.

Seoul's hopes for a rapprochement were again raised last month. "To smooth relations, South Korea will have to make an effort, but first Japan has to make concessions where possible," said Toshihiro Nikai, secretary-general of Japan's ruling Liberal Democratic Party, on a Sept. 29 TV program.

The next morning, major South Korean newspapers reported Nikai's comments as top news, with Dong-a Ilbo saying they were a sign that Japan wanted to improve relations.

Japan's Foreign Ministry, however, responded coolly to media inquiries about the statement. "Unfortunately the world does not revolve around Japan-South Korea relations," an official said at the time. "Seoul should not expect too much." Abe, left, shakes hands with Moon at the opening of the Winter Olympics in Pyeongchang, South Korea. Abe made the trip despite rising anti-Korean sentiment in Japan at the time.   © Reuters

Tokyo has reacted similarly to Lee's trip to Japan. Most countries were quick to inform Japan about who would attend the ceremony, but South Korea waited until Oct. 13 to give word. Seoul wanted to wait and see how Japan would react, according to a senior official at its embassy in Tokyo.

Abe will likely meet with Lee, but expectations on the Japanese side are low. The meeting will likely last about five minutes.

Abe is set to meet with leaders from about 50 countries, including Saudi Deputy Crown Prince Mohammed bin Salman and Chinese Vice President Wang Qishan, over four days. With such a packed schedule, he will have little incentive to meet with Lee for long.

"It's only because I can't ignore the emperor's guest," Abe said to lawmakers close to him, adding he does not think the meeting will improve relations.

The Japanese government will make seating arrangements and decide on the treatment of guests, which will include heads of state and royalty, depending on their rank. Lee is not a head of state or of government. 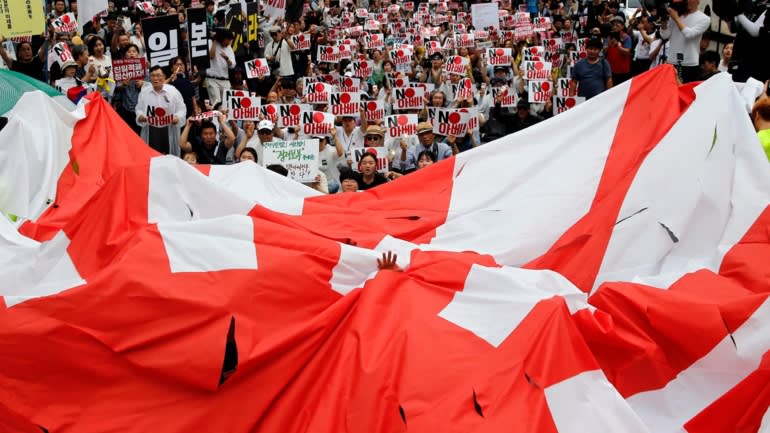 Protesters tear a Japanese rising sun flag during a a July 20 anti-Japan rally in front of the Japanese embassy in Seoul.   © Reuters

There is little reason for Tokyo to change its thinking. Its lack of trust in the Moon administration reached its peak after the decision to end GSOMIA so soon after the South Korean president's Liberation Day speech.

Many Japanese officials believe the next South Korean administration will take the same approach to bilateral relations as long as Moon's hard-line stance remains popular.

At home there is little popular pressure on Japanese leaders to improve ties with South Korea. At this point Japanese people's attitude toward South Korea is beginning to shift from "anti-Korea" toward "indifference," according to a senior Japanese government official.

Of respondents to a Nikkei poll conducted Aug. 30 to Sept. 1, 67% said that if Japan has to compromise, there is no need to hurry toward improved relations.

Japan is aware of Western concern that China is the main beneficiary of the dispute, but it does not think it is alone in its assessment of Seoul.

A Japanese official pointed to U.S. President Donald Trump's September meeting with Abe on the sidelines of the U.N. General Assembly. Trump said North Korea had not been in contact with Seoul, and wondered if the South had lost the North's confidence.

Inside Japanese Politics is the Nikkei Asian Review's new column that focuses on the details and inner workings of Tokyo statecraft, policy and foreign relations.