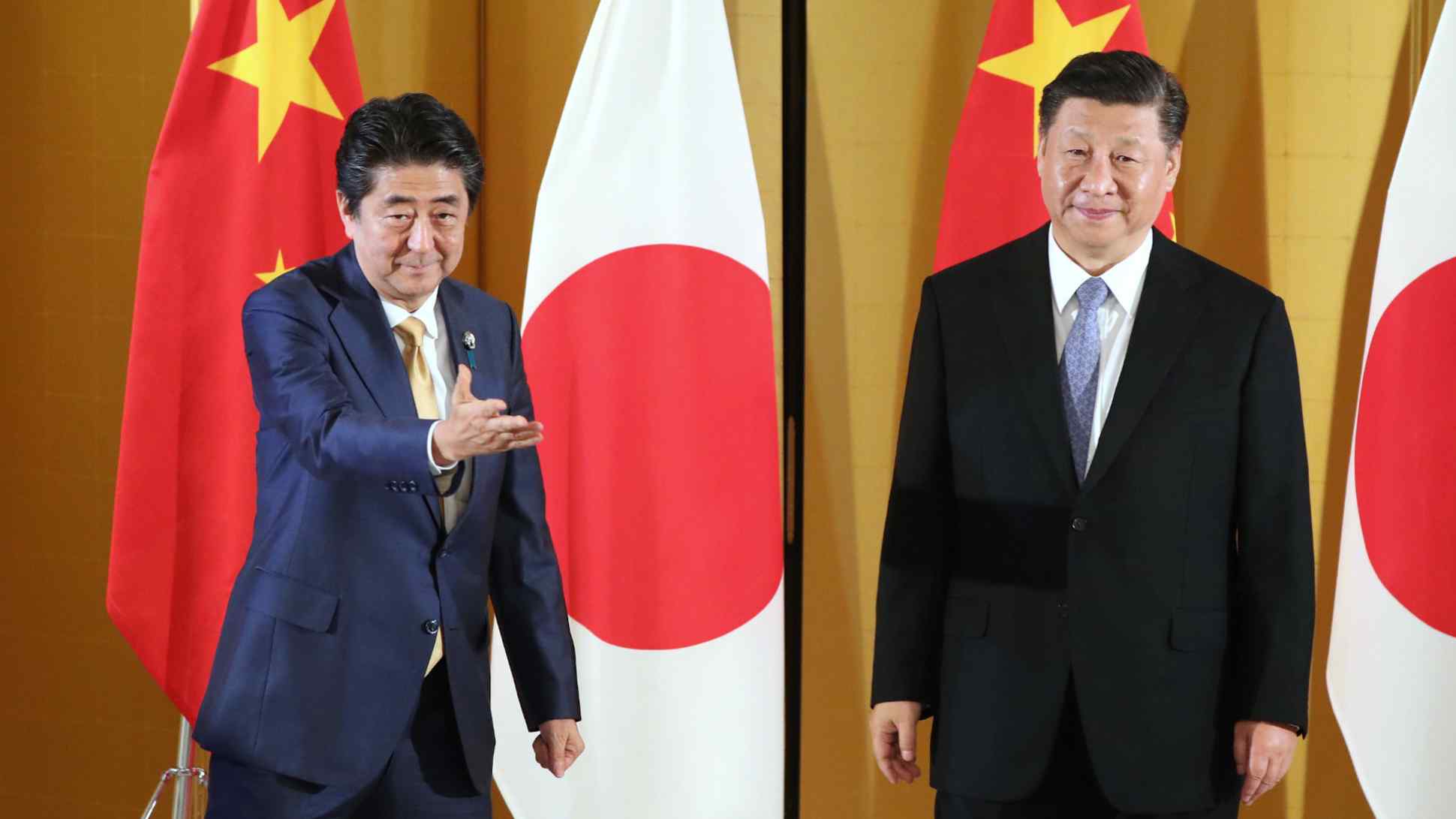 Japanese Prime Minister Shinzo Abe, left, hosts Chinese President Xi Jinping at a meeting in Osaka, on the sidelines of the G-20 summit in June 2019. Xi's next trip to Japan will be his first official visit to the country as top leader.
Inside Japanese politics

Tokyo to treat Xi as state guest, but with conditions

TOKYO -- Every 10 years, Tokyo and Beijing engage in psychological warfare over the Chinese leader's official visit to Japan, no matter how well or badly the two Asian powers are getting along.

Ever since the two countries normalized relations in 1972, the top Chinese leader's trip to the nearby country has been a major bilateral diplomatic event.

The last two such trips were in 1998, by then-President Jiang Zemin, and in 2008 by successor Hu Jintao.

In a long-awaited move, current Chinese President Xi Jinping, who also heads the Chinese Communist Party, will come to Japan this April in his first official visit since taking office. (He has been to Osaka for the Group of 20 summit.)

The treatment of Xi on this trip has emerged as Tokyo's biggest diplomatic bargaining chip.

The diplomatic wrangling was visible when Japanese Prime Minister Shinzo Abe visited Beijing and held talks with Xi this past December. Abe took an unusually strong stance over "sensitive issues" between the two countries.

"Without stability in the East China Sea, there will be no true improvement in bilateral relations," he said.

Abe also called for the early return of Japanese nationals detained in China on espionage charges and expressed concerns over the ongoing unrest in Hong Kong as well as human rights issues in China's Xinjiang Uighur Autonomous Region.

In the past, even when there had been a delicate exchange of words between the Japanese and Chinese leaders, Tokyo had often refrained from revealing or detailing such exchanges in public out of consideration for China.

But this time, Abe forthrightly told a news conference the next day that "I raised our pending problems directly with President Xi."

Abe's tougher stance stems from a heated discussion at a high-level meeting of his Liberal Democratic Party 11 days prior.

At the General Council, the party's top decision-making body, on Dec. 12, some LDP lawmakers had objected to having Xi visit Japan as a state guest.

Seishiro Eto, a former director general of what is now the Ministry of Defense, was the first to speak out. "If we are going to invite him as a state guest, we should ask China to halt intrusions into Japanese territorial waters," he said regarding the Senkaku Islands. Other LDP lawmakers echoed Eto's remarks.

Within the LDP, legislators have also worried about hosting Xi as a state guest at a time when China is subject to international criticism over the handling of the Hong Kong protests and the Uighur internment camps.

After the meeting, General Council Chairman Shunichi Suzuki sent a message to the prime minister's office, through a member of Abe's faction, that he looked to put to rest any intraparty objections to Xi's state visit by officially calling for the Japanese government to address these issues of concern.

While LDP conservatives have grumbled over the state visit invitation in the past, a formal request from a formal body of the party carries more weight.

Behind the scenes, China's own Foreign Ministry has warned Japan that if Xi would not be welcomed, he will not be making the trip.

Chinese presidents are usually treated as state guests when they visit foreign countries, except when attending international conferences.

This is because China attaches great importance to its top leaders' honor and does not agree to have them visit foreign countries unless they can do so as state guests.

It was Abe who first proposed inviting Xi as a state guest in their talks last June. Therefore, by protocol, Japan is in no position to retract the offer, no matter the objections from the public.

In light of such history, one would suspect that the prime minister's office would wish the objections to die down.

But sources inside the prime minister's office tell a different tale.

In fact, some of the prime minister's aides seem to have lobbied members of the LDP General Council to raise more commotion: "We want the party to speak out about Japan's stance more."

Their ulterior motive is to extract as many concessions as possible from China in return for arranging a successful visit, amid the opposing voices. 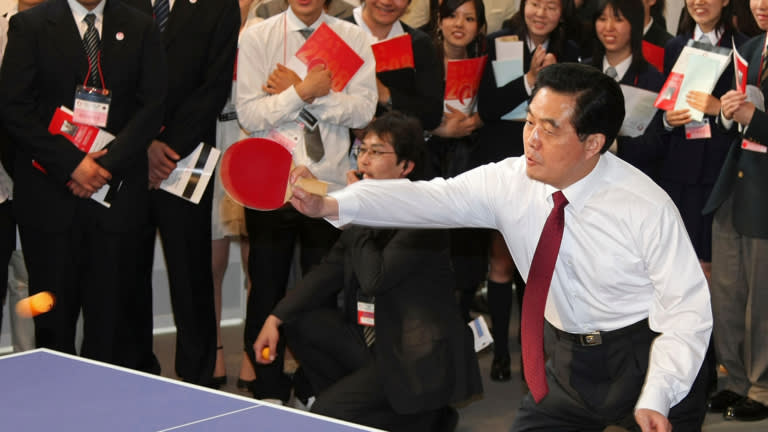 Then-Chinese President Hu Jintao shows off his table tennis skills at Waseda University in Tokyo during a visit to Japan in May 2008.   © Reuters

When Hu Jintao came in 2008, Tokyo leveraged the upcoming Beijing Summer Olympics, offering to help in making the historic games a success. The strategy worked. China agreed to conduct joint development of gas fields in the East China Sea, an issue it had not said yes on until then.

Jiang Zemin's trip in 1998 was a model of a failed visit. The two countries could not come to terms over historical issues, resulting in the Chinese leader calling out Japan for past "militarism" in an Imperial Palace banquet.

Deng Xiaoping came to Japan in 1978. Half a year earlier, more than 100 Chinese fishing vessels had gathered around the Senkakus.

The environment surrounding Xi's planned visit is even more fraught.

The number of official Chinese vessels confirmed in the 24-nautical-mile contiguous zone around the Senkaku Islands in 2019 exceeded 1,000 on a cumulative basis, hitting a record annual high.

Japan has confirmed that 10 of its nationals detained in China on spying and other charges have yet to return home.

China has stressed the need to improve the Japanese public's feelings toward it and has repeatedly asked the government here to provide proper guidance to domestic media outlets.

Japanese Defense Minister Taro Kono offered a counterargument when meeting with his Chinese counterpart in Beijing this past December.

"There is freedom of the press in Japan," which "cannot control public opinion like China," he said at the time. "In order to create a welcoming mood among the Japanese people for Mr. Xi's Japan visit, your side needs to make considerable efforts."

In late 2017, President Xi told Chinese officials to "improve relations with Japan even if there are problems."

Xi issued the instruction at an internal meeting after deciding that building better relations with surrounding countries was crucial, given the inevitability of a confrontation between China and the U.S.

On the other hand, Xi also told Chinese officials to resolutely protect national sovereignty. These instructions lie behind the increase in Chinese vessels heading toward the Senkakus and the continued detentions of Japanese, despite improved Sino-Japanese ties.

After his 2008 Japan visit, Hu came under criticism at home for caving in to Japan, destabilizing his political power base. Xi cannot afford to make the same mistake.

The psychological warfare continues as each side seeks concessions from the other.

In late December, after returning from his China trip, Abe called ex-defense chief Eto, the lawmaker who opposed the state visit at the party meeting, and briefed him about the meeting with Xi. "I properly conveyed Japan's position," the Japanese leader explained.

Eto did not take Abe's remarks as a request to sheathe his sword, but as an encouragement to continue to stand up for Japan.

Official Chinese vessels continue to intrude into Japanese territorial waters around the Senkaku Islands even after Abe directly urged Xi to address the issue. Eto said that "if the situation does not improve, I will speak out again."

Another LDP lawmaker, Masahisa Sato, a former colonel in the Self-Defense Forces, has also stressed both within and outside the party that "a state guest is a guest of the emperor, a symbol of the unity of the people," and that the explanation for inviting Xi as a state guest has been insufficient.

The Japanese side is also throwing another curveball.

Abe's younger brother Nobuo Kishi, an LDP lower house member, visited Beijing from Jan. 8 to Jan. 10 for exchanges between Japanese and Chinese lawmakers and emphasized the importance of stability in the East China Sea.

Kishi then flew to Taiwan on Jan. 12 and met with President Tsai Ing-wen, who had just won reelection.

While showing Tsai Japanese newspapers reporting her victory, Kishi congratulated her on her win and said: "All of the Japanese newspapers published articles about your win on their front pages. Even the [Japanese] prime minister does not always get front-page coverage."

Xi is alarmed by Abe's closeness to Taiwan. During their meetings, Xi has always tried to gauge whether Japan's Taiwan policy has changed. Kishi's recent visit to the island can also be said to be part of the ongoing mind games.