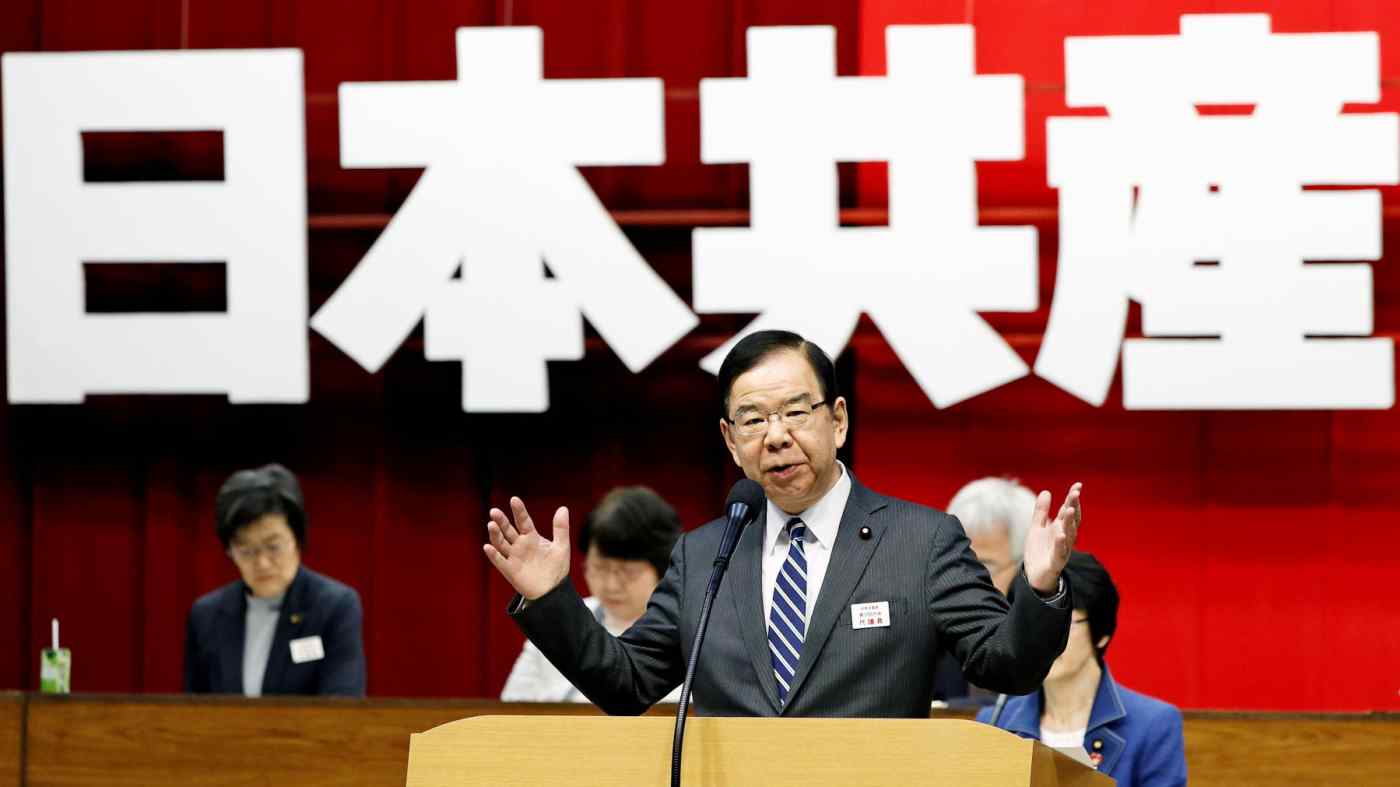 TOKYO -- Which of Japan's political parties has the longest history? The answer may come as a surprise.

It is not the Liberal Democratic Party, for all its decades in power, but the Japanese Communist Party.

More than three decades on from the collapse of the Soviet Union, the party lives on. Established in 1922, it is a rare example of a viable communist political presence in a developed nation.

Although there have been periods of conflict, the JCP had maintained a warm relationship with its Chinese counterpart since 1998.

That has begun to change this year. The JCP revised its platform last month for the first time in 16 years, adding an implicit jab at China and its Communist Party among the many changes.

First, it deleted a positive reference to China that existed in the previous platform, which said Beijing was "beginning a new quest for socialism, including the effort to achieve socialism through a market economy."

The new document avoids spelling out China but says, in language that echoes criticism of the USSR under Josef Stalin, that increasing "great-power chauvinism and hegemonism" among several major powers run counter to global peace and progress.

The change of tone was expressed more bluntly by JCP leader Kazuo Shii in a speech about the revisions, in which he referred to the Chinese Communist Party as "the Chinese party" in place of its proper name on several occasions. The leaders of the Chinese Communist Party with President Xi Jinping in the middle are seen at the party's national congress in October 2017.

"The Chinese party calls itself 'socialist' and 'communist,' but its great-power chauvinism, hegemonism and violations of human rights have nothing to do with 'socialism' and are not worthy of the term 'communism,'" he asserted to applause from the crowd.

This parting of the ways with Beijing is not simply a reflection of skepticism toward China of the sort gaining ground elsewhere in the world. Shii's declaration positioned the JCP as the sole legitimate heir to the socialism of Karl Marx and Friedrich Engels.

The JCP leader said the party has "battled against great-power chauvinism and hegemonism in the name of socialism" for more than half a century, alluding to an ideological conflict with the Soviet Union that began in the 1950s.

The party took issue with Stalin's dismissal of the thinking of Marx and Engels as belonging to an older time, and accused him of crafting a superficially similar but different ideological structure to suit his own convenience. It also objected to his purges of political opponents and oppression of minority groups.

Soviet leaders criticized Stalin's rule after his death, but the JCP rejected this and accused them of carrying on Stalin's "great-power chauvinism" and "bureaucratic dictatorship."

The feud with the Soviets led to what party members have called the JCP's greatest tragedy: a schism between those who went along with the Stalin-led USSR's demands for armed revolution and those who sought an independent JCP based on the socialism of Marx and Engels.

After this rupture, the JCP worked to purify its own Marxist-Engelsian brand of socialism. Tetsuzo Fuwa -- a party elder and perhaps its main ideological pillar -- has said that the JCP occupies a "unique position in the world," noting that "there are almost no parties in capitalist countries that grasp the theory and spirit of Marx and Engels and make an effort to consider the outlook for future change through that lens."

The split with the Chinese Communist Party is a natural consequence of this stance. But the nature of the JCP's criticism marks a step into new territory for the party.

As bitter as the clash with the Soviets was, the JCP characterized it as "a battle against great-power chauvinism and hegemonism that has arisen within a socialist nation." But the removal of the indirect reference to China as a nation on a "quest for socialism" from its platform makes clear that the party no longer recognizes Beijing as a "comrade" at all.

To be sure, the tensions reflect an antipathy toward China itself that was not present with the USSR.

Beijing's highhanded approach in the waters of the East and South China Seas and its violations of the human rights of Uighurs and Hong Kong protesters have fanned anti-Chinese sentiment in Japan more broadly.

"We can't stand to be lumped together with them," a senior JCP official said.

How best to distance itself from China is a question that is crucial to the party as it seeks to keep carving out a role in Japan's history.

The JCP is also eager to ride a recent wave of positivity toward socialism among younger people.

The JCP's new platform names "the unprecedented worldwide expansion of the gap between rich and poor" and climate change "causing various disasters on a global scale" as consequences of the "contradiction" of capitalism.

Under Marxist theory, a proletarian revolution requires a mature liberal democracy as well as a high level of productivity developed under a capitalist system. By this logic, the revolutions in Russia and China, which did not meet these conditions, were all but doomed from the start. By the same token, the JCP has been afforded a rare opportunity.

The reality is not so rosy.

Support for the party languishes at about 3-5%. Challenging the seemingly untouchable administration of Prime Minister Shinzo Abe is beyond its capabilities. It would not be impossible for the JCP to come into power as part of a coalition of minority parties, but its devotion to its principles leaves it with a dearth of potential partners.

Shii ended his speech by saying that overcoming difficulties to turn "grand possibilities" into reality is "the most romantic job there is."

That is certainly true. Marxism and socialist revolution have so far remained a romantic fancy of intellectuals.

Whether the JCP can achieve this as-yet-unfulfilled dream remains to be seen.