With legacy on the line, Abe faces crucial choices in September

Risk all for constitution revision or focus on picking successor? 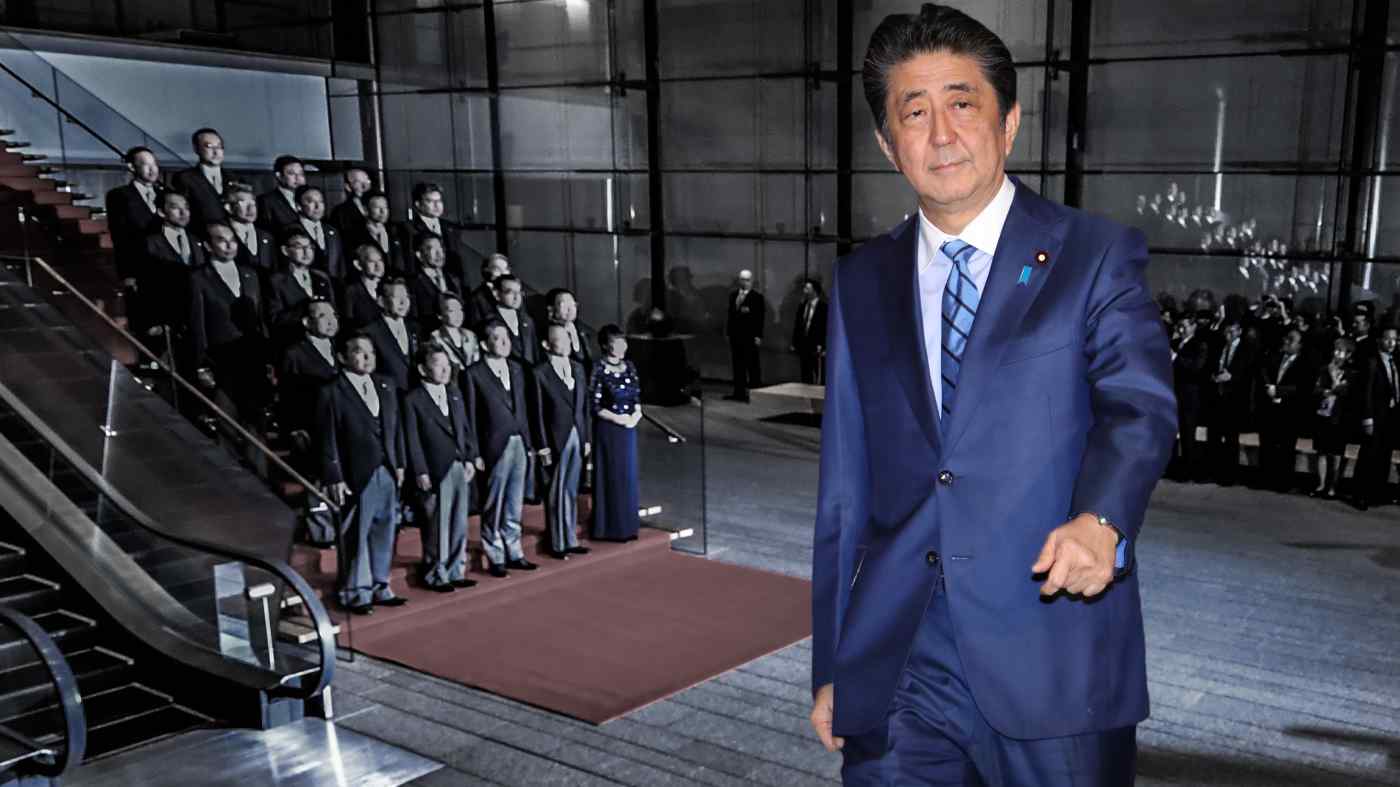 TOKYO -- September this year will mark the advent of a crucial season for Japanese politics, one that will determine who resides at the kantei, the prime minister's residence in central Tokyo.

Around the end of last year, Prime Minister Shinzo Abe let slip comments on a topic he typically avoids: his potential successors.

"There are many talented people in the LDP," he said on a television program, referring to the ruling Liberal Democratic Party.

All four supported Abe in the 2018 LDP party presidential election and currently hold key government and party posts. While the LDP is in power, the party president serves as Japan's prime minister.

Since assuming the prime minister's post at the end of 2012, Abe's political power has been unrivaled. Including a short-lived stint as premier in 2006 and 2007, he became the country's longest serving prime minister last November.

But despite the longevity of his administration, Abe has yet to groom a strong successor to pick up where he left off. Opinion polls show little recognition or enthusiasm for the four lawmakers he named.

Shigeru Ishiba, another important figure in the LDP who has distanced himself from Abe, is among the polling leaders. He has already indicated he will run for the party's top spot. 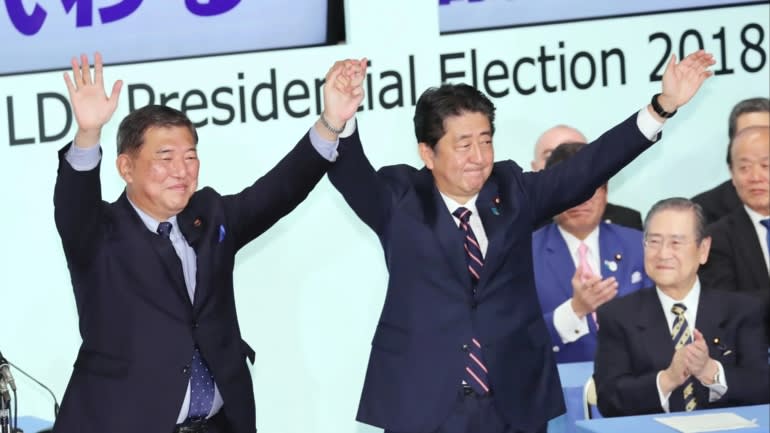 But the issue of constitutional revision, a long-cherished dream of Abe, has pitted the sitting prime minister against Ishiba, who made it clear he would adamantly object to proposed changes that would explicitly affirm the existence of the Self-Defense Forces, Japan's military, while maintaining the second paragraph of Article 9, which prohibits maintenance of the potential for war.

That paragraph states that Japan will not maintain "land, sea, and air forces, as well as other war potential."

Ishiba's objection to the plan means he will get no support from Abe. "Ishiba is the last person the prime minister wants to become his successor," said an LDP lawmaker close to Abe.

All of this is set to come to a head in September. The political season will likely kick off with the close of all events related to the Olympic and Paralympic Games in Tokyo on Sept. 6. During the events the ruling and opposition parties will put on an air of cooperation, but the closing ceremony will unleash pent-up political energies.

From that point, Abe will essentially have two options.

One is to reshuffle his cabinet and the LDP leadership without dissolving the lower house of the Diet, the Japanese parliament, and calling an election.

Such a personnel change would be timed to coincide with the end of LDP executives' one-year terms at the end of September, and would possibly be the last large-scale roster change for Abe, whose own term as LDP president will end in September 2021.

The lineups of the new cabinet ministers and LDP leaders offer clues as to who Abe prefers as his successor. When his term ends in 2021, Abe may be ready to hand the reins over.

Speaking to people close to him in late 2019, Abe said, "We can get a decent number of seats in the next general election under a new LDP president without dissolving the lower house, don't you think?"

He was referring to a scenario in which he would not dissolve the lower house and the LDP would go into the next general election under a new leader elected in a party presidential election in September 2021.

Abe has one other option: Dissolve the lower house and call a snap election.

Lower house members' current four-year term expires in October 2021. If Abe -- who has led the LDP to six consecutive victories in national elections -- gambles on a general election, he will likely call it in the autumn of 2020 or later, when sitting lawmakers will have less than a year left until their terms end.

If the LDP wins an election, a draft constitutional amendment could be put together in an extraordinary session of parliament in autumn 2020, and then the changes proposed in the ordinary session in 2021.

In such a scenario, it is likely that support for extending Abe's term as party leader will grow in the LDP. Rising tension in the Middle East and in East Asia have some worried, and Abe is seen as a steady hand.

The U.S. killing of Qassem Soleimani, the commander of the Quds Force in Iran's elite Islamic Revolutionary Guard Corps, and Iran's retaliatory missile attacks on Iraqi bases housing American troops, have escalated violence in the Middle East. Japan relies heavily on the region for its oil.

In East Asia, meanwhile, the international community has failed to halt North Korea's provocations and missile program, which pose a security threat to Japan and other countries.

And if U.S. President Donald Trump wins a second term in November this year, Abe's close personal relationship with him may become even more important. 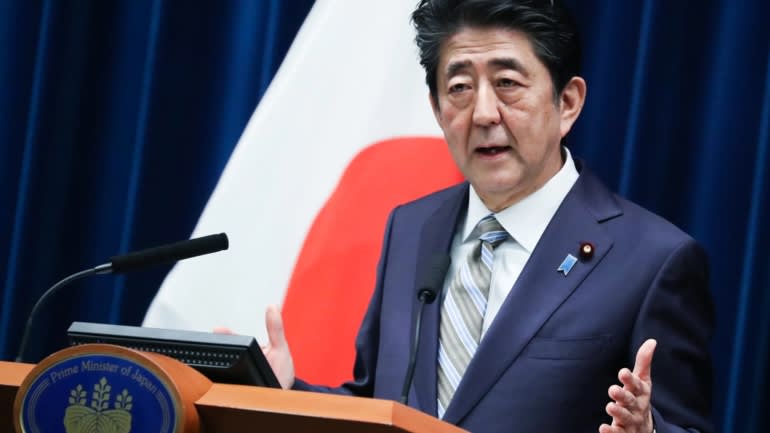 Abe speaks at a press conference in December 2019. (Photo by Uichiro Kasai)

Deputy Prime Minister and Finance Minister Taro Aso, an Abe ally, is already encouraging the prime minister to seek a fourth term as LDP president. "If you can't revise the constitution as things are now, your relatives in the next world will be laughing at you," he told Abe.

If Abe plans to run for a fourth term as leader, late autumn this year will be the time to start. Changes in the party rules will have to be made by an annual party convention expected to be held in spring 2021.

But calling an election is a risky move. If the LDP and other supporters of constitutional revision fall short of the two-thirds majority needed to propose such revisions, Abe could face calls from within the party to take responsibility.

He could become a lame duck and lose influence to Ishiba over who will take his place as premier.

Speaking during a ceremony at LDP headquarters, Abe talked about his New Year's resolution and referred to the 1960 Japan-U.S. security treaty revision.

"Sixty years on, I will try this year to resolve the challenges in Japan's postwar diplomacy once and for all," he said.

Whether Abe decides to wrap up his legacy this year and pass the torch, or try to extend his time as Japan's leader, he has until autumn to decide.

Inside Japanese Politics is the Nikkei Asian Review's column that focuses on the details and inner workings of Tokyo statecraft, policy and foreign relations.